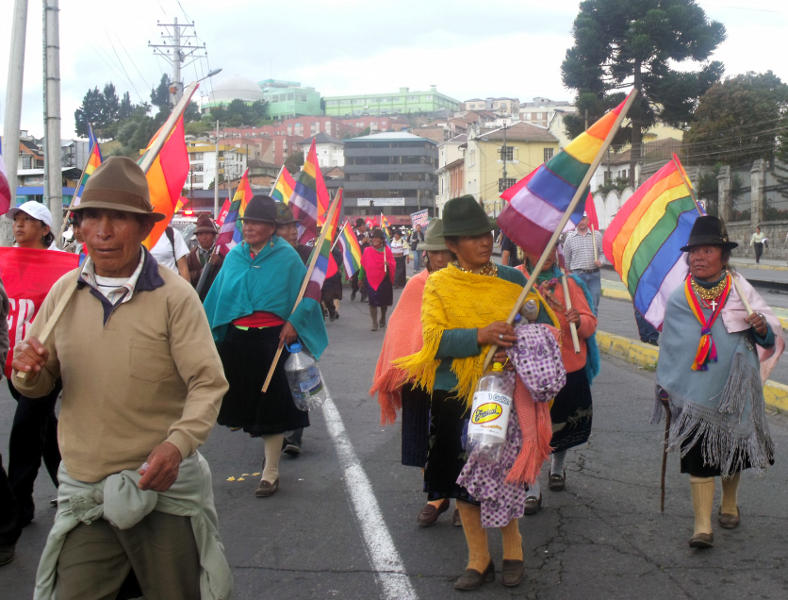 In Ecuador, a coalition of indigenous and civil society organizations marched from the provinces to the capital to protest a new Water Law passed last week. They’re currently gathered in Quito to form a People´s Assembly and challenge a list of policies backed by President Rafael Correa. Sofia Jarrin reports from Quito.

After ten days of marching for approximately 280 miles, representatives of indigenous and civil society organizations reached Quito Tuesday to protest a Water Law recently passed by Congress. The marchers say the law makes it easier for large industries, such as agribusiness or mining companies, to have priority access to water sources to the detriment of small farmers.

Ivonne Yánez, director of the environmental NGO, Acción Ecológica, says some parts of the law are “good” but that it’s not “the proposal of law that the indigenous people presented to the Assembly. It´s completely against the collective rights of the indigenous peoples.” Yánez adds that she thinks the law “will allow for a complete privatization of the water in Ecuador.”

In statements made via his Twitter account, President Rafael Correa denied the law will privatize Ecuador’s water and alleged organizations behind the water march are working for an opposition party.

Correa is currently serving his third term as president.

Initially support from leftist groups and indigenous communities has faded over the years as the president backed policies which favor natural resource extraction, restrictions on opposition media, and a new Penal Code that human rights groups say criminalizes the right to protest.

Carlos Pérez, head of Ecuarunari, one of the largest indigenous organizations in Ecuador, said police tried to delay the arrival of the march by putting up roadblocks along the way. “The fact that we made it to Quito is in itself a victory, because the government’s order was to put a stop to this with police on the highways,” he told a crowd in Quito. “But here we are, despite the police. This march is unstoppable and we will stay here for as long as we are needed.”

Pérez then inaugurated the People’s Assembly, a coalition of 16 national organizations that plans to develop a unified strategy on key policy points before returning to their provinces.

Among the items on their agenda is their opposition to a proposed Constitutional amendment that would allow Correa to run again for President, indefinitely, much like Chavez did in Venezuela. They are also calling for the release of imprisoned campesino leaders and a review of Presidential Decree 16, a law that makes it easier for the government to shut down non-governmental organizations.