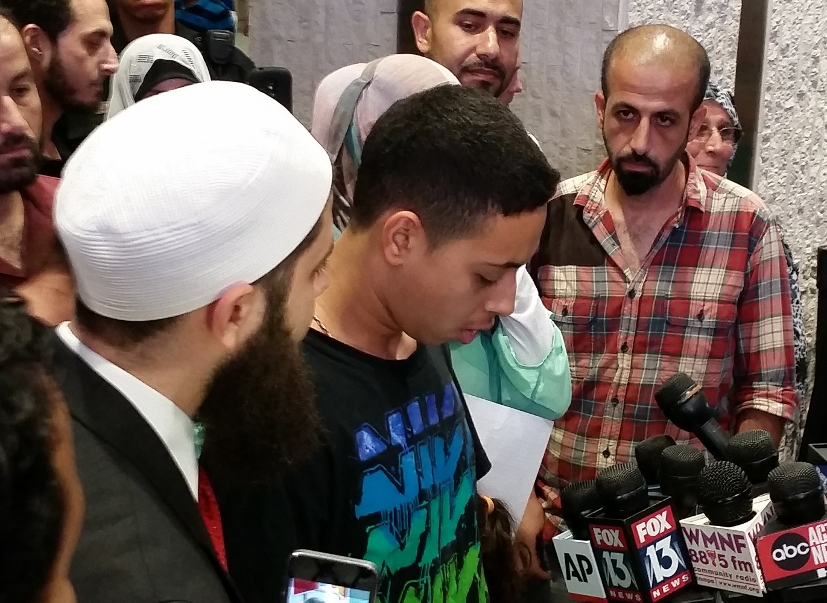 An American teenager of Palestinian descent who was beaten unconscious by Israeli police two weeks ago has returned home to Florida. Tariq Khdeir was welcomed by dozens of friends, family and supporters late Wednesday night at Tampa International Airport. FSRN’s Seán Kinane reports.

Tariq Khdeir looked like any other teenager when he was greeted, hugged and kissed by family at the airport arrivals gate. But in photos and a video taken two weeks ago his face was badly bruised and swollen. He was beaten after a protest over the murder of his cousin Mohammed Abu Khdeir, who had been abducted and burned alive by Israeli extremists.

Tariq Khdeir made a brief statement shortly after this arrival in Tampa: “I know he must have been terrified like I was. I was in a new place and suddenly attacked by masked police. It was by far the scariest thing that has ever happened to me. The physical pain in those first hours was really rough. And I’m only fifteen but I’ll never think about freedom in the same way as I did two [weeks] ago. I wanted to ask you all to please remember my cousin Mohammed and the thirty-six kids that died in Gaza over the past several days. They have names like mine. I hope the violence will stop for their sake. No child, whether they are Palestinian or Israeli, deserves to die that way.”

The teenager did not take questions from reporters at the airport.

The executive director of the Florida chapter of the Council on American-Islamic Relations, Hassan Shibly, says Khdeir will get medical attention for injuries sustained during the beating. “His eyes were still red from the bloodshot and the veins that they burst when they kicked him,” said Shibly. “But thank God, he’s just so excited to be back. A lot of friends, lot of family, lot of love, lot of support. It’s really probably the most rewarding night I’ve had at CAIR. Just seeing Tariq home and smiling made all of our efforts really worthwhile.”

Now that Tariq Khdeir is back home in Tampa, he says he just wants to go fishing with his friends. This was the first time US-born Khdeir had visited relatives in Jerusalem in over ten years.