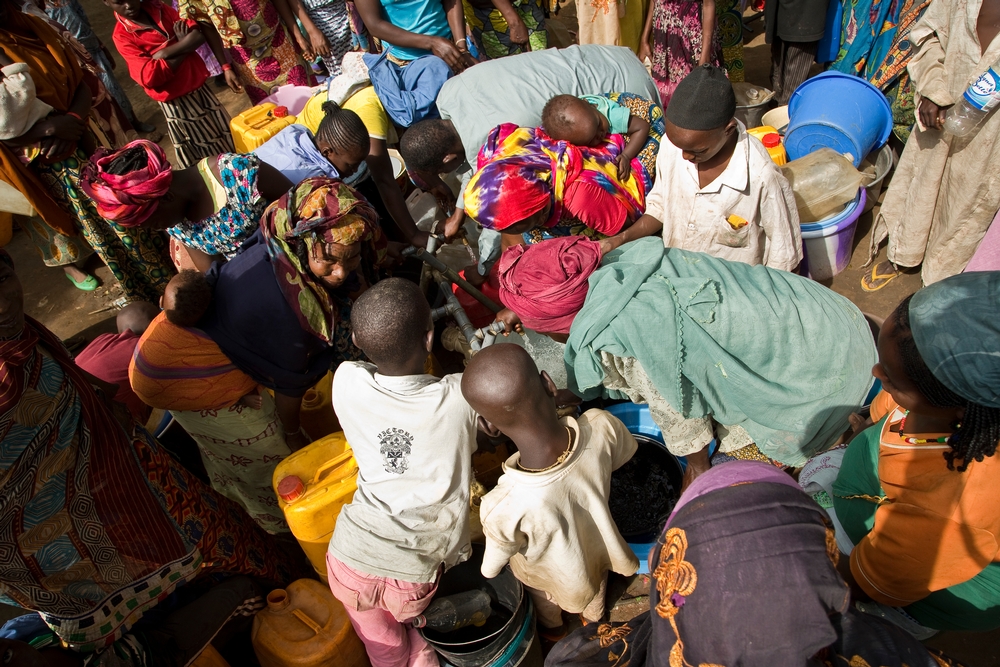 Refugees of the ongoing violence in the Central African Republic fill jerry cans and buckets with fresh water from a pump at Cameroon's UNHCR-run Giwa Yagambo refugee camp.

Since the Central African Republic — or CAR — gained independence from France in 1960, there have been eight coups. The security situation in the country has deteriorated during years of war, and hundreds of thousands of people displaced by violence have fled the country.

The most recent fighting has been between remnants of the predominantly Muslim Séléka rebels and the largely Christian and animist anti-balaka militias. Despite a shaky peace deal between the two groups signed in July, refugees continue to stream into neighboring Cameroon.

The journey between countries is long, and made mostly on foot. Those who survive the trek arrive weak and exhausted. Once in Cameroon they face a different set of challenges, including malnourishment and police brutality. FSRN’s Ngala Killian Chimtom traveled to Cameroon’s Eastern borders, the main entry point for the refugees, and files this report.

Yvette Faradongo weeps in front of her tent in Giwa Yagambo, a refugee camp in Cameroon’s Eastern Region. She has just lost one of her children ­ a two year­old daughter she had managed to save from the raging war in her own country: the Central African Republic. But the child couldn’t survive the malnutrition suffered during thirty days of trekking through the forests in search of peace and safety in neighboring Cameroon.

“We are fleeing death,” said Faradongo. “My son here got a bullet in the thigh. He is 22 years old. My younger sister was killed! A five-year­-old girl: killed just like that! We can’t stay in a place like that. We are running for our lives. You have the Séléka and the anti-balaka. Muslims have no love for Christians and vice versa. That’s what worsened everything.”

Almost every refugee here has a story of the horror and pain of losing loved ones in fleeing the conflict. Francis Ndengo crossed the border to Cameroon, but arrived bearing the mental scars of trauma.

“When I arrived here, I learned that my cousin had been shot, and I also found out that what remained of my family sought refuge in the Bangui-Bimbo St. Mark Major Seminary,” Ndengo said. When you are in a situation like that, you think only about your own survival. So everyone fled to separate destinations.”

The United Nations High Commission for Refugees says the influx of refugees into Cameroon has dropped slightly – from 10,000 people a week to slightly over 8,000 people. But some attribute the drop to the inability of those suffering from malnutrition to make the long and difficult journey to Cameroon, rather than an abating of the fighting in the CAR.

UNHCR field officer, Constancia Terribe says her organization, along with other aid agencies, has been struggling as best they can to treat the exhausted and malnourished refugees.

“Lately we have some people coming with malnutrition mainly, but with the help of our partners, we are working to help all these people recover,” explains Terribe. “They have been traveling for a long time, maybe weeks, or some of them they have been walking through the forests, so they come exhausted and they come with some health issues. This is why health is one of the major assistance that UNHCR and its partners give to the refugees.”

The life for refugees from CAR here is made worse by locals who exploit them and security forces who wield their power over them.

“We don’t have freedom of movement,” said refugee Francis Ndengo. “Security forces won’t accept the food rationing card as identification, which is the only document the UNHCR gave us. When you get to a checkpoint and present the card, they tell you that you cause trouble. Either they ask you to pay bribes, or tell you to go back or even throw you into jail. It’s only the UNHCR that would negotiate your release.

“This is our major problem here,” Ndengo continues. “But there is also a lot of exploitation, because people hire us to work on their farms and once the work is done, they often won’t pay.”

The refugees want the UNHCR to issue them refugee identification cards which will allow them to move around the country with greater ease. But Constancia Terribe says it could be a long and convoluted process.

“This is a very young operation,” Terribe explains of the UN mission. “And to issue refugee card, it takes time because it needs to be agreed with the Cameroon government. So we are working on it and we hope that by September, we will be in a position to facilitate this document accrediting them as refugees.”

Despite all these problems, many of the refugees here don’t think they will return to their home country anytime soon.

“The question of going back or not is linked to several factors,” says 64-year-old Augustine Dolly Debat, a retired engineer from the CAR. “First, there must be peace in the country. If we came to Cameroon, it’s because we know that Cameroon is a peaceful country. So if there is no peace, we can’t envisage a return. And going back will be an individual decision. Each person will have to decide to return or not to return. And that too is linked to several factors. How will the person who decides to go back home survive after losing everything?”

Instead, many here look forward to integrating into the larger Cameroonian society. But to do this, they need basic revenue on which to survive. Terribe says the UNHCR is working with partners to help the refugees build small businesses or plant crops while their shelter and basic food needs are provided for.

Students who fled CAR say their future lies in continuing their education. But demand far outweighs spaces available for the refugees in Cameroonian schools, especially at the university level.

While the number of refugees flooding into Cameroon from the Central African Republic has declined since 2013, the UNHCR estimates more than 200,00 thousand are currently in the country. Of that number, many plan to stay for the foreseeable, yet uncertain future. 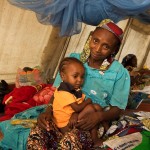 Yvette Faradongo and baby. Another of her children, a two-year-old daughter, died a week after arriving at the UNHCR Giwa Yagambo refugee camp in Cameroon. 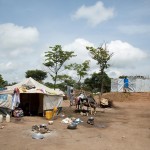 A tent and hygiene station at the UNHCR-run Giwa Yagambo refugee camp in Cameroon. 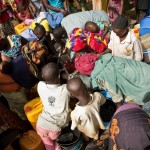 Refugees of the ongoing violence in the Central African Republic fill jerry cans and buckets with fresh water from a pump at Cameroon’s UNHCR-run Giwa Yagambo refugee camp.