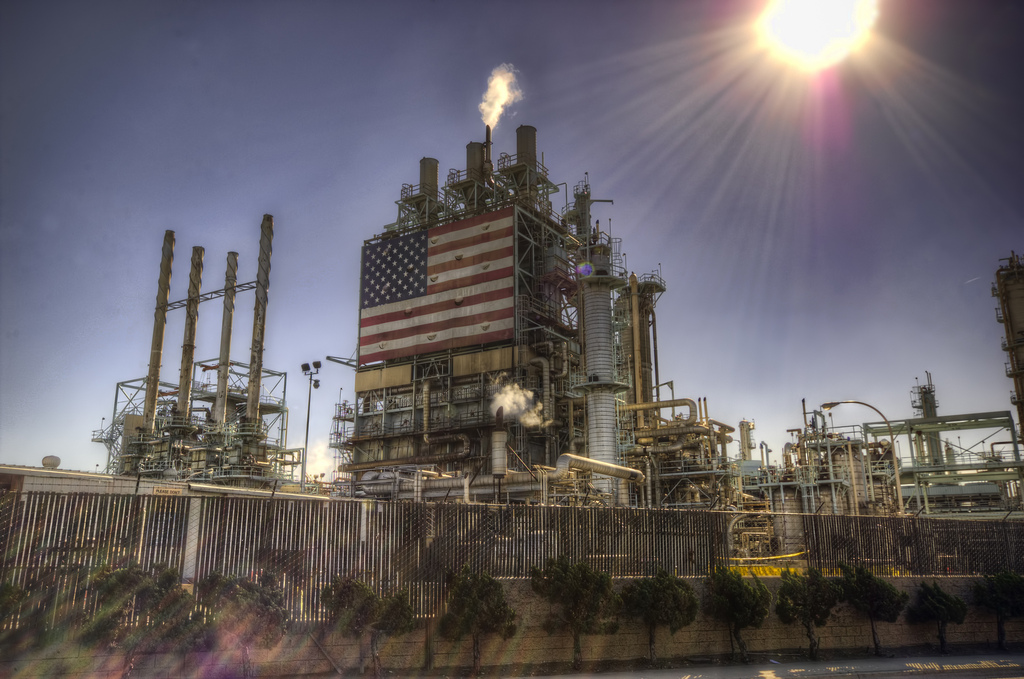 The US Environmental Protection Agency held a day-long public hearing Tuesday near Houston over proposed new rules regarding air quality at oil refineries. The Gulf Coast area stretching from Houston, Texas to Baton Rouge, Louisiana is home to the largest concentration of oil and petrochemical refineries in the United States. The EPA proposed the new rules in May in the wake of a lawsuit brought by dozens of environmental organizations and communities groups based in areas where oil refineries operate. One of those organizations is the Louisiana Bucket Brigade. For more on what the proposed rules would mean for communities near the refineries, FSRN’s Shannon Young spoke with the Louisiana Bucket Brigade’s Founding Director, Anne Rolfes.

Shannon Young: What exactly do these proposed EPA rules on air quality call for?

Anne Rolfes: Well, like any new rule, it’s complicated. But in my mind, you can really understand it by looking at two factors. Number one is the proposed rules would eliminate some loopholes that industry curently uses. For example, when they have a malfunction, they can flare and dump as much as they want. And a malfunction is a pretty vague term. And so what this rule would do is say that no longer can you just pollute endlessly during a malfunction.

Another very important part of the rules is in regard to monitoring. We like air monitors in communities because it helps people to understand what they’re exposed to and then, ultimately, to reduce emissions and this rule would require more monitoring in communities.

SY: Explain what “fence-line monitoring” means and who does it.

AR: Fence-line monitoring makes a lot of common sense. If you think about the words involved, it’s “fence-line” so, people who live on the fence-lines, right at the gates of some of the biggest industries in the country. For example, in the capital of Louisiana – in Baton Rouge – there is a neighborhood right across the street from an ExxonMobil refinery, which is the second largest one in the country. As you can imagine, there is a lot of production at the refinery. And yet, there is not a single monitor in the neighborhood that lets people know about their air quality.

As you go through the states, as you go through Texas, Louisiana, you find that there are really very, very few monitors around these big refineries. And so it’s easy for them to say “everything’s fine” because there’s no evidence to the contrary. Monitoring is really about trying to get to the truth and get to the bottom of the situation. We can’t understand the air quality without having monitors in the neighborhoods.

SY: What’s the current procedure for documenting and reporting releases of airborne toxins? What kind of access does the public have to that data?

AR: There are very, very few monitors so in a state like Louisiana, there are something like 31 or 38 air monitors and we have hundreds of facilities. So, the status quo is really fairly pathetic. We need air monitors in every single neighborhood next to these facilities, period. Right? That’s the bottom line. If we’re going to produce petrochemicals for the nation and for the world, we at least ought to understand what’s coming off of these plants and into the neighborhoods.

The majority of information that the government has is simply written down on paper by the refineries. So you can imagine: if you were required to tell police officers how often you sped, you probably wouldn’t tell them very much. So we have a similar problem and dynamic here in this world which is really a self-reported world in regard to toxins.

In regard to public access, you can call the state agencies to get the information, but it’s a long and drawn out process to do that. Various bits of information are available through different websites. If you wanted the information about the accidents that the facilities have, for example, you’d have to call or write or formally request it from the state agency. There is a database called the Toxic Release Inventory that is organized by the Environmental Protection Agency. People can go online and find that.

So, there are little pockets of information available in various areas. Again, it seems as if there is a system designed to prevent people from easily understanding what’s in their air.

SY: Your group, the Louisiana Bucket Brigade, trains volunteers in fence-line communities to take their own samples for analysis. What have bucket brigade volunteers found and how do they document it?

AR: People who take the air samples as part of the bucket brigade are residents of neighborhoods next to big oil refineries or chemical plants. And so we train them how to use the bucket and when it smells bad in their neighborhood, they go outside and they take a sample. There have been a couple of occasions where people have not even had to go outside, where the smell has been so intense, that they’ve actually taken the air sample in their own living room.

The process is one that’s been approved by the Environmental Protection Agency. Our “bucket” is what we call our air sampling device, is a cheaper version of a technique called a SUMMA canister.

So, the EPA uses a SUMMA canister, it costs a couple of thousand dollars, but our air sampling bucket, the analysis is much less expensive. And so we’re able to put buckets in the neighborhoods and we find that people catch all kinds of things: carcinogens, particularly benzine, which is one of the chemicals addressed in the rule. There are also various sulfur compounds.

If you think about an oil refinery, they’re cleaning this oil – right – they’re cleaning it to become gasoline to put in our tank. And what happens to all of the sulfur they put out of the oil? Well, it goes into the air and people breath it. Our bucket can catch the sulfur and document exactly what is coming into people’s homes.

SY: Anne Rolfes, anything else you’d like to add?

AR: Well, what we’re dealing with is a fundamental question, I think, of right and wrong. You have community after community that is actually across the street from companies that are making billions of dollars every year. Here in Louisiana – and in Texas as well, you have ExxonMobil. Profits year after year exceed 40 billion dollars. And they refuse to invest the million dollars or so it might take to put in comprehensive monitoring systems? You know, that’s… that’s really, really sad. So, we’re looking forward to changing that dynamic.

SY: Anne Rolfes is the Founding Director of the Louisiana Bucket Brigade. She joined us by phone from New Orleans.