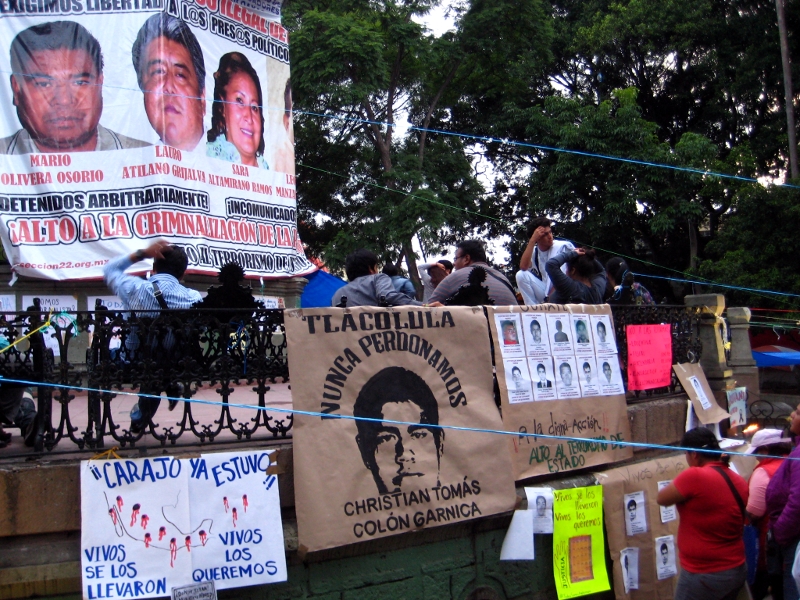 Signs posted around the central kiosk in Oaxaca City's main plaza include one of a printed portrait of a young man from the nearby town of Tlacolula who is among the missing Ayotzinapa students. (Photo: Vladimir Flores)

In Mexico, the search for 43 missing students – all from a rural teachers’ college in Ayotzinapa, Guerrero – continues to be a major issue. Many of the missing students were last seen in police custody September 26th after local forces from the city of Iguala opened fire on students and bystanders along a highway, killing six.

Police from Iguala and a nearby town have been arrested as part of the investigation. In the process of searching for the students, more than 25 clandestine graves have been discovered in the hills around Iguala – most of them by citizen defense patrols with the Union of Peoples and Communities of the state of Guerrero – known by its Spanish acronym UPOEG.

Shannon Young: Daniel, you just returned from Iguala, where you were for much of last week. What did you see while you were there?

Daniel Hernandez: Well in Iguala, we saw another little city in Mexico that is completely under the control of a drug cartel. The federal police and the new force, the gendarmería, the gendarmerie, were in full force. The mayor is missing, as is his wife, but for the most part, the city is there. And the sense that cartel halcones – little watchmen – are watching you is pretty clear as well.

Right now the UPOEG, the community police volunteers from the city of Ayutla, and others are also there camped out in the middle of town and they’re going up into the hills looking for other graves or – they hope – looking for the 43 missing normalistas.

DH: Well, what they’re doing for the most part is going in groups of 20 to 25. They’re driving on the backs of pickup trucks. They’re not carrying anything more than machetes. They’re going without police protection and without any professional police forensics investigators. And these are regular campesinos from Guerrero. They’re not even from Iguala, but they’re pretty determined, they say, to find these kids alive.

They use machetes to clear away brush. It’s difficult hiking, although the hillsides are beautiful. It’s very green and lush now that it’s the end of the rainy season. But it is sort of tough terrain and they’re poking at the ground and looking for graves and pits.

People are very hesitant to talk to reporters or outsiders in general. So, they say that the little bits of intelligence that they’re gathering, they’re using to try and find other victims of this horrible narcoviolence that has taken hold of this part of Guerrero.

SY: You mentioned that the UPOEG is searching for graves without police backup. What kind of support are the citizen defense units receiving from the authorities once they do find graves?

DH: At first, the graves were secured immediately by either military or state police. And supposedly, the Attorney General’s Office forensics investigators were going up there and also forensics investigators invited to this investigation from Argentina. But at this point, while the UPOEG guys went up there, they’re sort of like a vigilante force. They’re sort of like an autonomous group. They don’t trust the government. And sort of the reaction to that from the government is that there’s a little bit of hostility to their activity. They’re not really getting a lot of support on the ground.

SY: It’s certainly a lot of take in. What are your main reflexions on this case and its larger repercussions for Mexico?

DH: I think this case reflects not only the depth of narco influence in a lot of these small cities in Mexico and regions across the country, but also the inability of the government to properly react. Right now, this is a huge PR crisis for Mexico’s government as it seeks to implement market-friendly reforms in everything from telecommunications to the oil industry. At the same time, what the Iguala massacre – or apparent massacre – tells us, or at least tells me, is that the state of affairs in Mexico is just one where there is no real rule of law in place that the average citizen can enjoy.