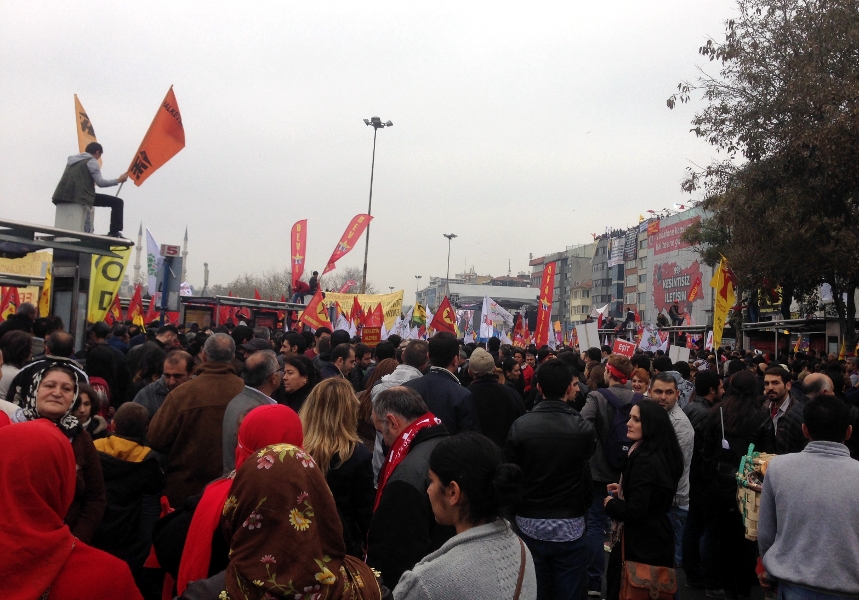 Local authorities in Istanbul have announced plans to demolish tens of thousands of homes in a neighborhood that is a hotbed of anti-government unrest. Authorities say the structures are unsafe. The area is home to many Alevis, a progressive Islamic sect whose followers traditionally support liberal and secular politics.

In a year of anti-government unrest in Turkey, all those killed by security forces were Alevis. That has contributed to a widening social divide between Alevis and orthodox Muslims, including many supporters of Turkey’s Islamist-rooted ruling party. And as Dorian Jones now reports, with the Prime Minister running in presidential elections this weekend, sectarian tensions are rising and threatening to reopen historical wounds.

At a rally in Istanbul, Turkish Presidential candidate Selahattin Demirtas slams his rival, Prime Minister Recep Tayyip Erdogan, over dividing their country along sectarian lines while pointing to the dangers of similar schisms in Iraq and Syria.

For 25-year-old Kenan, these grim warnings are all too real: “For us Alevi Muslims, the Prime Minster is a threat to all of us, he is threatening our country. He is no better than Hitler, he wants to destroy us.”

Alevi Muslims, like Kenan, follow a progressive form of Islam. They make up as much as a fifth of Turkey’s population. They’re strong backers of the secular state and traditionally support center-left parties. They are also generally wary of the conservative Islamic roots of the ruling AK Party. The dozen or so people killed by security forces in a year of anti-government protests were Alevis. Many AK party members and its supporters are orthodox Sunni Muslims.

Alevis don’t pray in mosques. Men and women worship through music and dance. Professor Istar Gozaydin of Istanbul Dogus University is an expert on religion and the State, she says the current political strife is stirring ancient tensions. “They are sort of heretics in the eyes Sunni Muslims,” Gozaydin explains. “The Alevis have been experiencing all sorts of atrocities, discriminations through the history both in Ottoman times and in Republican times as well. Unfortunately that is still continuing today, socially for example there are quite a many problems, the Alevis and Sunnis do not get married among themselves.”

Alevi suspicions of the government run particularly deep here, in the centuries-old Okmeydani district of Istanbul. The area is a renown place for Alevis, as well as a hotbed of anti government protests.

Walking around the streets, graffiti against the Prime Minister is everywhere, along with the names of those killed by security forces. Half a dozen have died in the last year, including a 15-year-old boy. Now the local authorities controlled by the ruling AK Party has declared the whole area unfit to withstand a major earthquake and decreed its demolition. It will be redeveloped, forcing thousands to leave their homes, with uncertain promises about when – or even if – they can return. “They aim for this place to change to get rid of people like us Alevis,” says Ahmet, an area fruit vendor. “They see us as threat, they cannot accept our existence, they hate us. Its simple we are Alevis and they are Sunnis.”

Tensions are rising fast ahead of the presidential elections this weekend. Prime Minister Erdogan is being accused of using divisive sectarian language while rallying his Sunni Muslim voting base. The country’s security force chiefs frequently interchange the words “Alevis” and “terrorists”. A leading government deputy even referred to Alevi places of worship-Cemvevis as terrorist centers.

In reaction, thousands of Alevis have been out on the streets of Istanbul, protesting against prejudice and police brutality. This teacher, who didn’t want to give her name, says she’s worried that the ruling AK party is stoking a religious polarization: “This government, they want us to live what they want. For Sunni Islam, the women want to use a headscarf, but for Alevis we don’t have to use scarf. And Sunnis go to mosques to prey we go to Cemevis Of course I feel frightened. Alevis massacred in this country, 50, 100, 200 people were killed. One year ago in Adiyaman, some people put crosses on the Alevi people’s doors, it means one day we will kill you, it can happen to us too, so I am afraid.”

Prime Minister Erdogan is widely predicted to comfortably win the presidency. Many people are bracing for life in an increasingly polarized society, divided along sectarian lines. Like the Okmeydani district of Istanbul, the Alevis of Turkey are facing an uncertain future.