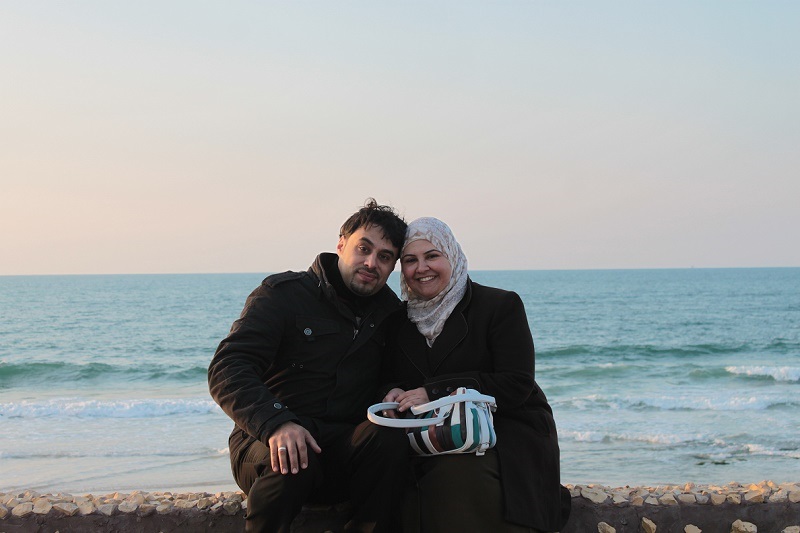 For many years, residents of the tiny coastal enclave of the Gaza Strip have been largely segregated from the rest of the world. An Israeli-imposed lock down on the territory prevents Gazans from freely leaving the region – and blocks entry for most others. Dalia Shurrab, a Palestinian from the Gaza Strip, is engaged to be married. But Israeli authorities won’t allow her to travel to the West Bank where her fiancée lives. Israeli human rights groups have described the policy of refusing permission for Palestinians to travel between the two territories as “unbearable.” Dalia Hatouka reports.

In his bedroom in the West Bank city of Nablus, Rashed Faddah is doing what he does every day, sometimes several times: speaking to his fiancée Dalia Shurrab. 32-year-old Dalia lives in Khan Younis, a city in the Gaza Strip. The couple met four years ago at a conference in Jordan and got engaged in Gaza shortly thereafter.

At the time, Rashed was able to get to Gaza through Egypt. These days, the Egyptian government rarely opens the border crossing with the coastal enclave. Since Jan 2015, it has only opened it on five days.

“She’s so affectionate and kind, and she’s very ambitious,” says Rashed, still very much in love four years on. “Dalia is very loving, that’s why I want her to be the mother of my children. So that she can teach them how to be like her.”

Long-distance relationships often rely on technology, say the couple, but it’s that much harder when they live in the same country and are not allowed to be together to finally tie the knot. Israeli authorities would have to issue a permit for Dalia to get to the West Bank so the couple can be married, but permits like those are few and far between.

The separation of the West Bank and Gaza Strip has affected thousands of Palestinian couples like Rashed and Dalia. Israeli human rights groups regularly document cases of families torn apart because of the divide between the two territories, with Israel rarely issuing permits for Palestinians to relocate.

“Israeli officials defend their policy,” Stein explains, “they say its for security reasons, but of course one cannot accept this argument, it’s a very sweeping argument that all the people are security threats.”

Several prerequisites must be met for an applicant to ask for a permit, and he or she must fit one of several categories. Marriage is not one of them.

Faced with very few options, Dalia and Rashed launched an Facebook campaign called “Deliver the Bride to the Groom.” The campaign calls on the Palestinian Authority (PA) president Mahmoud Abbas to help secure a permit from the Israelis so Dalia can travel to the West Bank to marry Rashed.

A little more than 80 miles away in Gaza, Dalia explains that there’s a lot at stake – besides their marriage plans – should their online campaign fail.

“It’s not an easy thing being a Palestinian from Gaza specifically,” says Dalia. “I see my dreams falling apart one after the other. I can’t go outside to study abroad or find a job outside that can appreciate my hard work and my attempts to develop myself and my society.”

The couple admit that sometimes it feels as though it might be easier to let go.

“Sometimes we feel like we have hit a dead end,” Rashed, in Nablus, shares how deeply this frustration can run. “But we keep supporting each other to continue. We are not threatening anyone. We just want to live a normal life. By besieging Gaza, the Israelis have made our lives, and those of others, very complicated.”

The couple insists they will exhaust every available option to be reunited. Until that happens, Dalia and Rashed will have to settle for moments like this.