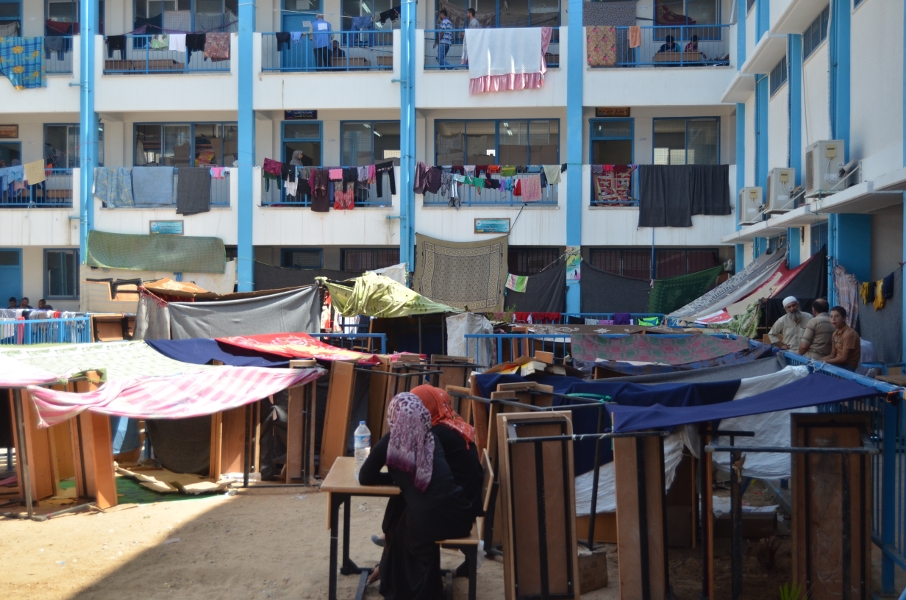 As ceasefire talks continue in Cairo, more than 200 thousand Gaza residents remain displaced in United Nations-run schools in the coastal territory – many due to the destruction of their homes during the Israeli military offensive. FSRN’s Rami Almeghari visited a school converted into a shelter and files this report.

According to United Nations figures, nearly two thousand Palestinians have been killed and almost ten thousand injured since the start of the Israeli military offensive five weeks ago. More than 16 thousand homes have been destroyed or severely damaged and hundreds of thousands remain displaced. But lost in the statistics is the impact the offensive is having on everyday life.

Reham Elkhaisy and Yehya Hejazi are a young couple from the eastern Shija’ya neighborhood of Gaza city. They were supposed to get married this week – plans which were put on hold after Israeli air strikes and tank shells heavily bombarded their neighborhood weeks ago. They are now taking shelter in the Albahrain UNRWA-run prep school for boys in western Gaza city.

Yeheya’s fiancee, Reham, says it’s the second time their wedding is postponed in the last year and a half. She told FSRN that some in the shelter suggested holding the wedding party in the school, “but others objected and even cried, warning us against any wedding party. I do truly hope that the times, prior to the war, return. Of course, I feel really sick and disgusted, as I have lost all my belongings, including the things of the wedding. Our entire house has been destroyed. We fled in the early days of the war, as our house is located just on the eastern limit of the border.”

One of the reasons some staying at the school warned against holding a wedding party there is because many of the shelter residents are mourning loved ones killed in the offensive.

The Albahrain boys’ school now currently shelters 3300 residents from the eastern areas of Gaza city. Among them is Hussam Alharazzen, a father whose house was partially damaged during the attacks. He says he has no problem with staying at the school long-term. “Our demands are legitimate and possible. We simply want to be able to live in dignity, the way a part of this world lives. It’s not as if we’re demanding the standard of living of advanced countries.”

Palestinian and Israeli negotiators are holding indirect talks in Cairo via Egyptian mediators, for the stated purpose of reaching a lasting ceasefire in the region. On Monday, the parties agreed on a three-day ceasefire.

UNRWA spokesperson in Gaza, Adnan Abu Hasna, estimates that the relief agency is now hosting 207,000 displaced residents in 87 UN-administered schools. He says if the parties reach a lasting ceasefire, some of the facilities can reopen for the new school year by early September. However, other schools will continue to shelter a few thousand displaced families. Abu Hasna also says the agency will ramp up its distribution of food aid to the general population. “This will include aid for 144 thousand families including registered and non-registered refugees and citizens,” he told FSRN. “Our food rations will include a 30-kilogram sack of flour and 10 kilograms of rice for each household.”

Palestinian media reports that the parties in Cairo have agreed on some points, including increasing the number of truckloads of goods into Gaza, allowing entry of raw building materials under close observation and expanding the fishing zone for Gaza fishermen. All three points have been severely limited by an 8-year-old land and sea blockade of the territory.

Hamas and other armed factions in Gaza have demanded an end to the Israeli blockade and establishment of a sea port, a point which Israel has refused.

Israeli demands include the disarmament of Palestinian armed groups in Gaza, including Hamas, and the release of the bodies of two soldiers killed in the fighting.

In the meantime, Gaza residents mourn their dead, care for the wounded, and try to reclaim a semblance of “normal life” under siege.