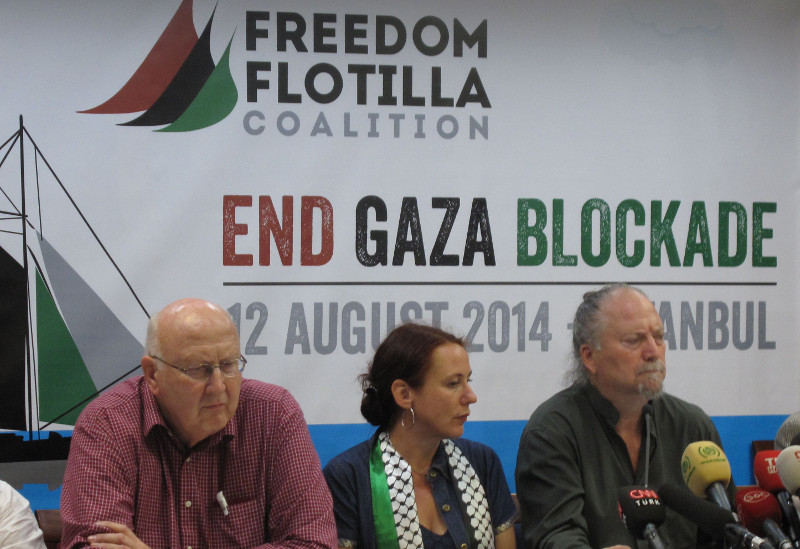 A coalition of pro-Palestine groups announced today that they are assembling another flotilla that will attempt to break the Israeli blockade on the port of Gaza. The last flotilla attempt ended in the deaths of10 activists after Israeli commandos raided the flotilla’s flagship the Mavi Marmara in 2010. FSRN’s Jacob Resneck has more.

Calling itself the Freedom Flotilla Coalition, the group of activists from about a dozen countries said that Israel’s sea blockade over the port of Gaza is illegal and continues to harm the more than a million and a half residents of the Gaza Strip.

“The people of Gaza have the right to have direct contact with the rest of the world,” said Swedish-Israeli activist Dror Feiler says after two days of meeting campaigners from more than a dozen countries he concluded that direct action is necessary. “We think we follow international law, we think the siege is collective punishment which is illegal. If the international community thinks it’s legal then it’s our duty to act out civil disobedience.”

The meeting took place in Istanbul, the home port of the Mavi Marmara aboard which Israeli commandos killed 10 Turkish citizens after raiding the ship in international waters during a similar voyage. Activists decried the 2010 incident as piracy.

A UN investigation concluded that Israel had used “excessive force” when stopping the ship, but ruled that the naval blockade was legal under international law. Feiler – who was born in Israel but renounced his Israeli citizenship and was barred from visiting the country last month – said the group hopes to avoid further bloodshed but would not be
intimidated.

“I was on the flotilla of 2010. Ten of our brothers were killed; they are now martyrs for all people fighting for international law and human rights,” Feiler said. “During history people were always ready to sacrifice their lives for freedom – we are also ready to do that.”

South African activist Ismail Moola related the occupation of Gaza his own country saying it was international pressure and boycotts that helped end discriminatory state policy there.

“Obviously we come from a background where we understand Apartheid,” Moola said. “We understand dehumanization, we understand home demolitions, etc. etc. But it is very vital for us to acknowledge the role the international world played to bring down Apartheid in South Africa.”

Greta Berlin, co-founder of the Free Gaza Movement and an American citizen living in France, told FSRN she’s seeing a sea change in American discourse. “I think there’s a huge difference between what is happen in civil society and what actually happens in the government,” Berlin said. “When I see the change in the United States is civil society is beginning to push the politicians; and I’m happy about that.”

The coalition offered no timetable of when they would sail saying that past flotillas had been sabotaged in advance and that the date and ports of departure would be kept secret as long as possible.

There was no concrete evidence offered that the coalition even has ships but the announcement of the initiative in Turkey is significant.

Turkish-Israeli ties have suffered since the Mavi Marmara incident and the country’s populist prime minister Recep Tayyip Erdogan – elected president on Sunday – has made the plight of Palestinian people a rallying call for the predominantly Muslim electorate.

The coalition’s Turkish partner – the Islamist-rooted Humanitarian Relief Foundation – suggested last month that a future flotilla could be accompanied by a Turkish military escort across the Mediterranean Sea. But the coalition’s spokespeople said they don’t want armed escorts and insisted any future action be unarmed.