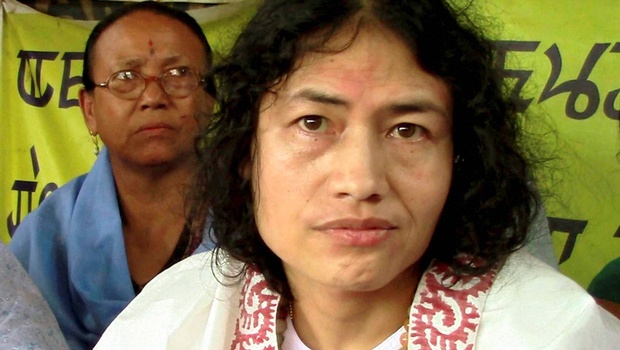 Authorities in India’s north-eastern state of Manipur have again arrested noted human rights activist Irom Sharmila just  two days after her court ordered release. Sharmila has been on a hunger strike for 14 years demanding revocation of a draconian law that gives sweeping powers to Indian security forces to fight separatist movements. Sharmila is being held at a hospital for force-feeding. As Bismillah Geelani reports, the arrest has evoked strong criticism and renewed calls for repealing the law that many believe is encouraging human rights abuses.

Barely 40 hours after Irom Sharmila’s release, dozens of police arrived at the protest site where the 42-year-old activist had continued her hunger strike, surrounded by supporters. The officers grabbed Sharmila’s arms and legs and took her, almost dragging her, into a police vehicle.

Sharmila and her supporters resisted shouting “you can’t do this, it’s illegal,” but she was taken back to the hospital where she has been force-fed through a nasal tube for 14 years.

“They treated her as if she was a wild animal who was going to attack them or some kind of a terrorist who was going to take out a gun and shoot them,” described local activist Babloo Loithingam, who said it was shocking to watch. “The amount of force they used was such that her nail started coming off, her right toe was bleeding and her clothes were dropping, even the brutal colonial British who were colonizing this country and sucking it did not arrest Mahatma Gandhi when he was on hunger strike, they never called him a criminal, they respected him.”

Once again, police charged Sharmila with attempted suicide. The court that ordered her release earlier this month had dismissed the same charge, finding that her political protest was not necessarily an attempt to kill herself.

“It is a mockery of our judicial system,” said Ravi Nitesh, coordinator of the Save Sharmila Solidarity Campaign. “We knew that the government would do something to keep her away from public because people were rallying around her and she has the potential to build a strong movement against the draconian laws but we had not expected that they would violate the judiciary in this manner.”

In 2011, the Save Sharmila Solidarity Campaign organized marches and public meetings in several Indian states to raise awareness about the importance of Sharmila’s struggle. Nitesh says the government’s response to Sharmila’s protest only reinforces deeply held skepticism about the effectiveness of non-violent methods of struggle.

“We are sending a very wrong and dangerous message by continuously ignoring Irom Sharmila’s struggle,” Nitesh said. “I remember meeting many people during that long journey and an overwhelming majority was of the view that Irom Sharmila’s decade-long hunger strike with no result was proof that non-violence does not work. We tried to convince them that it was not the case but in reality we are giving people reasons to believe that in order to make the system respond to your genuine demands you have to take recourse to other ways.”
Irom Sharmila began her fast in 2000 against India’s Armed Forces Special Powers Act (AFSPA).

The law gives impunity to Indian security forces operating in areas declared as “disturbed.” Under this law a soldier has the power to search arrest and even shoot a person on the mere suspicion of being a militant. The law is currently in effect in India’s north-eastern states and in Indian administered region of Kashmir where armed insurgencies against Indian rule are on-going.

In all these areas, human rights abuses alarmingly increased after the law was introduced and human rights groups have for long demanded a repeal.

“There have been so many commissions appointed by the Supreme Court and by the federal government which themselves have said that this law should go,” explains Raghu Menon, Senior Policy Adviser with Amnesty International India. “I think that if anything should be the starting point for this new government which has taken charge just over a hundred days ago, to set in motion a process that will take into account the concerns raised by people of great integrity, respect and experience who were appointed by the government and raised red flags as well, so it is not just activists who are saying this.”

In the past, the now-ruling Bharatiya Janata Party has opposed the idea of repealing the law. As a government however, the party’s policy on the issue remains to be seen.