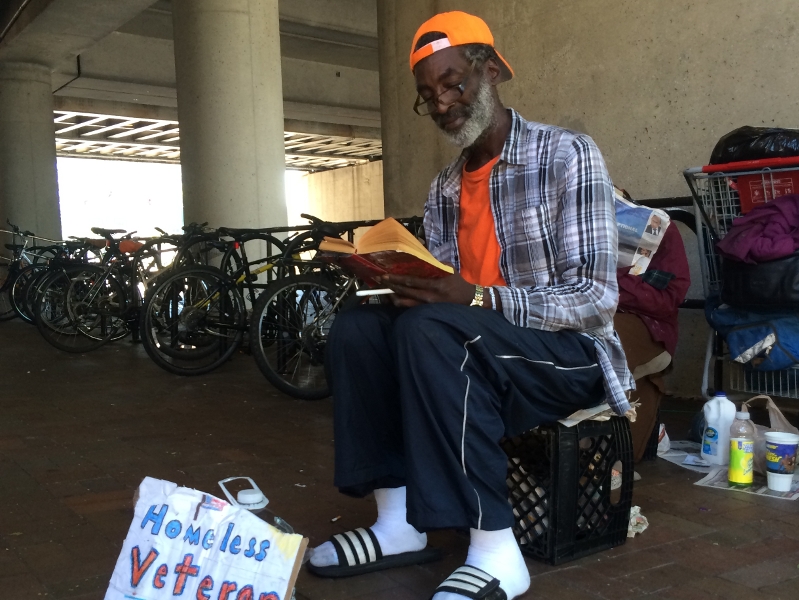 This week President Obama announced 19 executive actions to help reform the embattled Veterans Affairs Department and improve the health and lives of veterans. But in light of a new report also out this week about the scandal involving egregious wait-times at the Veterans Affairs hospital in Phoenix, watchdog groups are skeptical these new changes will do any good. Ashley Westerman reports from Washington, DC.

Samuel Hinton – a thin, black man of 57, with hair that is beginning to grey, but with eyes that are are an eerie, dull blue – lives under the Silver Spring metro station right on the Washington DC/Maryland border. Hinton, originally from Atlantic City, New Jersey, served in the Army in Vietnam. Now he’s homeless…and has been for almost 20 years.

“I do a little something here and get on my feet here and then again, crash again,” he says, comparing his life to a roller coaster. Hinton tells FSRN he makes about $15 a day asking for money. At night, he sleeps wherever someone won’t bother him. He doesn’t do shelters. He says his Post-Traumatic Stress Disorder, Psychosis and Manic-Depressive Disorder won’t allow him to tolerate a small room full of people.

One of the 19 executive actions President Obama announced on Tuesday aims to keep veterans from falling through the cracks, like Hinton. At the American Legion National Convention in Charlotte, North Carolina, President Obama said the new “inTransition” program is “going to make it easier for service members being treated for mental health conditions to continue their care as they transition to the V.A. So automatically connecting them with the support they need, making sure they don’t lose access to any medications they may be taking.”

Obama’s other initiatives to help veterans’ mental health include forming a peer support group for vets with mental illnesses, hiring more doctors and increasing funds for brain injury studies. There are also a couple that aim to provide housing and jobs.

Joshua Stewart, Political Assistant Director with the National Coalition of Homeless Veterans, says providing a continuum of care as vets leave the service is important because “then we can catch these problems early, we can give these people help that they need before they do become homeless. It’s all about intervening early and helping early.”

The National Coalition of Homeless Veterans says a presence of mental disorders ranging from substance abuse to mental illness are risk factors for vets to become homeless. Stewart notes Obama also did announce a one-third drop in homeless veterans since 2010, and says these actions further chip away at this issue.

On the very same day Obama announced these initiatives, the Inspector General of the V.A. released a report that backed up claims of significant delays to medical care in the veterans health care system and evidence that staff manipulated wait times on reports to hide delays. The previous I.G. probe also found that 40 veterans died waiting for care at facilities in Phoenix, Arizona – but stopped short of attributing their deaths to the wait, saying they found no “conclusive” link. The scandal cost former V.A. Secretary Eric Shinseki his job and led to Congress passing a $16 billion reform package.

Concerned Veterans for America Senior Adviser Darin Selnik says a non-conclusive finding is government-speak for “we don’t want to be sued.” He says what’s really disappointing is that the V.A. also does a yearly performance and accountability report that’s pretty much the same thing: “’You know, we caught you again.’ ‘Yes, we’re making corrective actions, it won’t happen again.’ And then there’s no, there’s no follow up, no one’s punished and so it happens over and over and over again.”

According to this week’s I.G. report, the FBI is going to investigate now nearly 100 V.A. medical facilities for potential criminal activity.