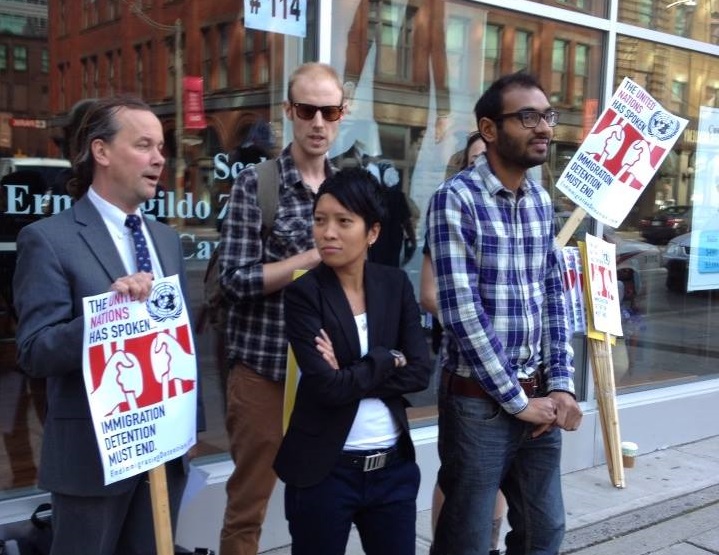 The Canadian immigration detention system has come under scrutiny in recent months. Last fall, hundreds of migrant detainees in Ontario launched a 65-day hunger strike calling for an overhaul of the system. Demands for investigation
grew when a woman detained in a Vancouver center committed suicide. And this Spring more than 100 detainees launched a boycott, refusing to attend case reviews, saying Canada’s immigration system is rigged. Now the United Nations has weighed in. Erin Hudson has the story from Toronto.

Michael Mgovo remains jailed in a Canadian immigration detention center. He’s been there for nearly eight years. Mgovo was picked up in 2006 by the Canadian Border Services Agency, but they couldn’t verify his identity, which is required for deportation under Canadian immigration rules.

But according to a recent United Nation’s opinion on the case, the fact that the agency can’t figure out exactly who Mvogo is, does not justify his ongoing detention.

The UN says that immigration detention must be the last resort, it should be for the shortest amount of time possible, there should be adequate judicial review and immigrants must not be blamed for their own detention,” immigration activist and researcher Syed Hussan explains. “And on all four of these counts, canada is a rogue state and it’s breaking international law.”

The UN opinion addressed not only the Mgovo case – but also the Canadian immigration system at large. Issued by the UN Commission on Human Rights’ working group on arbitrary detention, it outlines Canada’s violation of articles in both the Universal Declaration of Human Rights and the International Covenant on Civil and Political Rights.

The opinion substantiates the findings of a recent study by Hussan and a network of activists, showing the longer the detention the lower the chances of being released. In fact, internal government documents obtained by the End Immigration Detention Network through access to information requests show that if detention lasts 14 months, the release rate is almost zero.

Extended detention is what sparked a boycott in June, during which more than 100 detainees refused to attend case reviews.

“The reason why we decided to do a boycott, some people here are ten years, guys here at five year, four year, three year — that’s how it’s going,” said Robert, who gave only his first name out of fear of retribution. “People here are on immigration for seven years, 10 years. I’m on immigration for three years now. And this is crazy. And there’s no alternative. They just keep you as long as they can keep you until you either get deported or stay in jail and rot.

Michael Mgovo is but one example of the many people detained in Canada on immigration holds for months or years in detention centers or maximum security prisons.

Jean Vecina is Mgovo’s immigration lawyer, based in in Toronto. She and her team petitioned the UN in his case, resulting in their broader review of the country’s immigration policies.

“This is significant because in essence the UN is saying the current detention review process in Canada is so problematic and deficient that it’s practically non-existent,” Vecine said. She describes in detail some of the issues with Canada’s review system. “Under the detention review mechanism that we have a board member is allowed to refer to reasons for a detention that’s been rendered maybe months ago, even years ago. And it’s very difficult to challenge an order of detention because, first, the detainees are actually unable to cross examine their accusers or confront them, meaning the removal officer.

“And the only other avenue through detention can be challenged is through the federal court. Unfortunately this is not a matter of right. It’s a judicial review, which means you have to get the leave of the court before the matter can be heard and if the court refuses leave, the case goes nowhere. The court can also refuse leave without reason so you would not even know why it was refused in the first place.”

The UN’s opinion is not legally binding for Canada.

“The UN has issued an opinion; it’s time for the federal government to step up to end immigration detention,” said immigration reform advocate Hussan. “The human cost of this is immense. We’re talking about thousands of people separated from their families, and we’re talking about mothers and fathers being taken away and locked up. It’s immoral, it’s unjust, it’s illegal. It must end.”

Meanwhile, despite the UN’s call for his release – and for reparations – Michael Mgovo remains in jail.