For Jordan’s Trash Pickers, Work Isn’t What it Used to Be 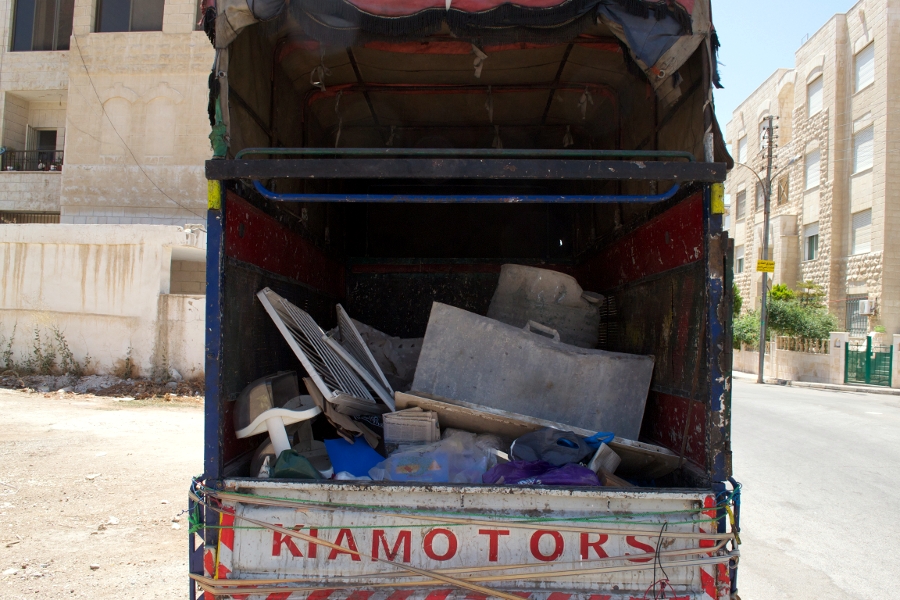 Mahmoud's finds one day: a drying rack for laundry, newspapers, scrap metal and a case for displaying food. The scrap metal and newspapers he will resell to a factory and the rest he can resell at local markets.

Few professions are more grueling, dangerous and revealing than digging through trash. As work that is completely dependent upon the refuse of others, it is a window, of sorts, into a country’s economic soul. In Jordan, regional turmoil and the presence of hundreds of thousands of refugees have strained an already depressed economy. For trash workers, multiple factors magnify this stress, and they see and feel its accumulated impact in a unique way. From Amman, Elizabeth Whitman and Karl Morand file this report.

Twenty three-year-old Adnan is one of many Jordanians who make a living rummaging through dumpsters to find scrap metal and plastic and to salvage discarded household items for resale. He’s not having much luck today, commenting that someone has apparently already picked through the dumpster before him.

Trash pickers say their ability to make a living has decreased in recent years as Jordan’s economic situation steadily worsens.

Forty-year-old Salah has witnessed this trend during his 17 years in the business. He, like other trash pickers interviewed, did not want his last name used due to the stigma associated with the profession. “Initially, people used to throw out metal, plastic, other things,” he sold FSRN. “Now people who have things, sell them. Before, they would throw them out. Now people are more aware.”

Salah says more people have started working as trash pickers because they can’t find other jobs.

Official unemployment is at 14 percent in Jordan, but unofficially it’s thought to be about twice that. According to Jordanian economist Yusuf Mansur, the country has recently endured four or five years of poor economic growth. He traces these woes back to the 2008 crisis.

“The Central Bank panicked in September 2008 after the collapse of the Lehmann Brothers and it cut, it cut, decreased significantly, all kinds of money supply to the private sector,” he explains. “The banks stopped lending, I suspect upon the behest, well, I don’t suspect, I know, upon the behest of the Central Bank. And we entered an economic crisis.”

Mansur says disparities between the rich and poor in Jordan have become more pronounced. But Abu Ali, who has spent a quarter-century perusing dumpsters, doesn’t need a trained economist to tell him the poor are worse off today than before.

“In the beginning, a long time ago, 25 years ago, people like me numbered 10, maybe 15, kingdom-wide,” says Abu Ali. “Now there are, have started to be, about 1,000, 1,500 people doing this kind of work. It’s higher because of unemployment. There’s no work. So everyone’s digging through dumpsters to work.”

One of the few people to study the situation of the country’s trash workers is Amal Madanat, a Jordanian environmental activist. She says she’s has interviewed over 200 garbage pickers over the years and calls them the invisible recycling experts of Jordan. “They know every details [sic]. They know when the price is going up, when the price is going down, for all the materials, plastic – heavy plastic, light plastic – aluminum, metal, metals, anything you can ask for, they know it.”

The basic law of supply and demand applies as trash workers increase in number. The more scrap material is available to factories, the less they pay for it.

Abu Ali says the work isn’t what it used to be.

In addition to the economic crisis, changes in trade patterns and routes due to the war in Syria have raised the prices of many food products. At the same time, the influx of refugees has pushed up housing costs. The overall impact of the refugees on Jordan is disputed, but what is clear is that the negative consequences are felt the most by the poorest.

And while the environmentalist Amal Madanat calls Jordan’s trash pickers the invisible recycling experts, they could also be described as the nation’s unrecognized economists. They see what people are or aren’t throwing out. They know with how many others they’re competing for this trash. And they follow how the trends change over the years. For them, acquiring such deep knowledge isn’t a choice – it’s a necessity their very lives depend on.