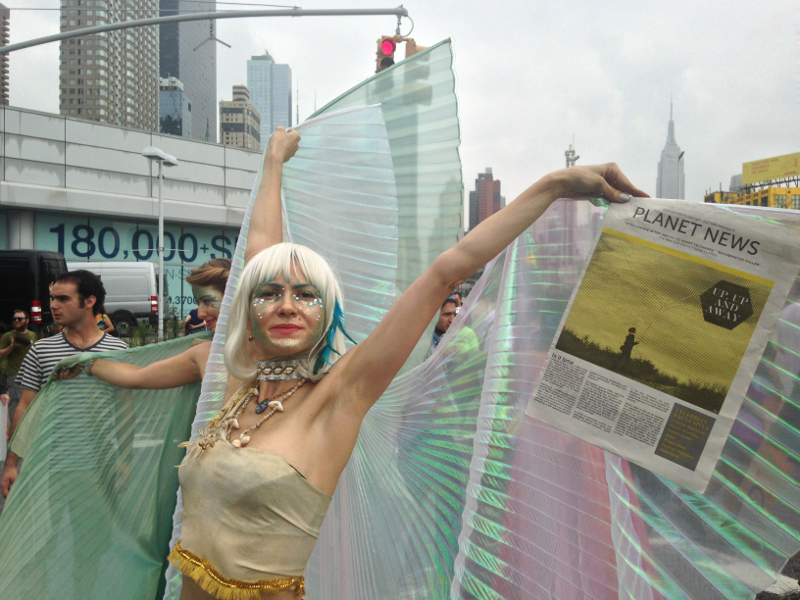 New York City became a world stage for climate change discussions this week – not just at the United Nations, but also in the streets. Hundreds of thousands participated in The People’s Climate March on Sunday and Wall Street was the scene of a sit-in on Monday. The two days of activities in the streets preceded a one-day climate summit at the UN on Tuesday. From New York, Rebecca Myles brings us this round-up of the events.

The United Nations climate summit wrapped up Tuesday evening with an assortment of non-binding pledges from member nations.

UN Secretary General, Ban Ki-Moon was optimistic about the outcome. “Today was a great day – a historic day,” he said in closing statements. “Never before have so many leaders gathered to commit to action on climate change. I thank every one of you who came to New York with ambition and commitment. I asked for bold announcements from Governments, business, finance and civil society in five key areas. The Summit delivered.”

Among one of the more celebrated initiatives to come out of the talks involved promises of ending deforestation and restoring one million square miles of forest worldwide by 2030. Co-signers included the United States, the entire European Union and Canada. Brazil, home to part of the world’s largest forest – the Amazon – did not endorse because its officials say they were not included in the negotiations.

An initiative supported by big bankers and large industries involves putting a price on carbon in order to create a worldwide carbon credits market. Critics of this measure say it not only creates the illusion of emissions reductions, but also fuels financial speculation and allows the rich to pollute the poor.

The role of financial institutions in shaping climate policy was part of what prompted around two thousand protesters to “Flood Wall Street” on Monday. Demonstrators staged an hours-long sit-in around the brass bull, the financial district´s iconic sculpture.

“We came because we’re Unitarian Universalists and we came because our religion tells us that we need to protect the earth,” said Sarah Redmond, one of the protesters risking arrest. “And I have six grandchildren and I want them to have a livable planet, and everyone else’s kids. ”

As the sun set, police gave an order to disperse and later arrested the more than 100 people who had refused to leave the area – including a person in a polar bear costume.

Many of those who participated in the Flood Wall Street action on Monday had come to New York for the People´s Climate March on Sunday.

Organizers of the People’s Climate March estimate more than 400,000 people participated; quadrupling their expectations for what they were already billing as the largest climate march in history.

The march drew people from around the U.S. and even from other countries. It sought to unite a variety of different causes which intersect with climate issues, including indigenous land recognition, environmental racism, the anti-fracking movement and more. Signs included slogans like Wake Up and Smell the CO2, There is no Planet B, and Nature is not a luxury. Sister events in 158 countries took place in Berlin to Istanbul to Rio.

“For every war, and every tank and every soldier, the US military uses so much fossil fuel it has added to the climate change problem,” said Madelyn Hoffman, a New Jersey-based peace activist. “We use more in the process of waging war then we get in return so it is a net energy loss. We want to see the nation get off oil, and the world and go into renewables. And if we stop the wars we can save those resources too – human, financial, environmental, all those resources.”

Now that the UN climate summit is over and the out-of-town demonstrators have returned home, many are now looking ahead to the next time world leaders plan to meet on the climate issue. The next UN meeting will take place in Lima, Peru in December and a larger, more formal summit is scheduled for next year in Paris.

Between then and now, the leaders who made promises in New York this week can show the international community their pledges are serious…or just more hot air.