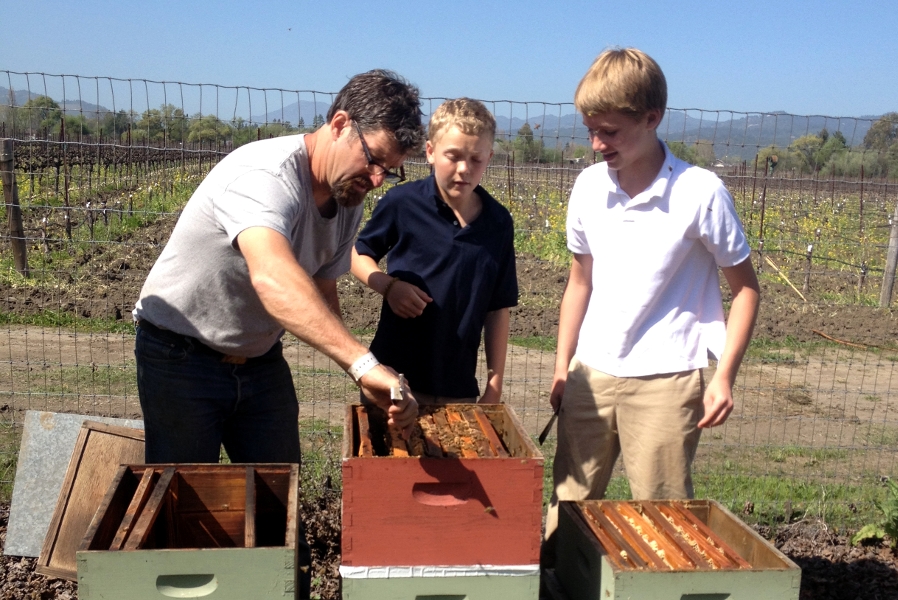 With commercial honey bees dying off from pesticides and diseases, Napa resident Rob Keller – is a man on a mission to save the honey bee. He has become A leading advocate for bees in his community. His approach involves methods of strengthening the genetics of local bee populations by breeding bees with the strongest DNA. And he’s committed to passing his vision on to the next generation through awareness and education. FSRN’s Karin Argoud reports from Napa.

Nestled in the gardens of Long Meadow Ranch in Napa Valley, Rob Keller is preparing to split a bee colony, thereby establishing two sets of hives and a second colony. Each week, he comes to take care of the apiary with students from his beekeeping class at St. Helena Montessori School.

Keller is at the forefront of building apiaries at schools. Known as “The Bee Guy” this tall redhead buzzes with energy and enthusiasm amid a swarm of middle school boys.

“If you’re looking at these colonies here today at Long Meadow Ranch – they’re big and bumping- and we’re splitting them,” he says while working. “How they’re doing around the valley overall is shaky. We lost a third of our bees this year. Some do really well that have been acclimated to their location. I think it has a lot to do with the bees too. That’s why we’re looking closely at rearing just local bees.”

Still looking for the queen, Keller grabs the microphone and plunges it into the depths of a bee box with his bare hand.

He explains the goal is to breed “for the strongest genetics we can from our local bees, and ensuring that the queens that we’ve isolated are mating with our males so that it betters the chances for a stronger overall local honey bee.”

The three middle school boys begin a heated discussion on bee stings. Henry Cutting is the most animated of the three. He and fellow student Tate Shafer describe getting stung.

“That happened to me the other day: one flew down my shirt and bit my on the shoulder and I was just losing it and flipping out and shaking all over,” said Cutting. He adds that bee stings emit a pheromone which cause other bees to “recognize you as a threat.” Cutting says it’s good “to keep calm and don’t get stung the first time, but maybe after one sting or maybe a few, you do might want to get a veil on or find the smoker.”

Beyond learning how to behave around bees, 13 year-old Liam Peace says the beekeeping class has changed the way he treats them. “I used to kill bees if they were close to me because was afraid of them,” explains Peace. “But now that I know that they’re like fine creature as long as you’re not getting them angry, there’s totally fine so there’s no point in killing them at all.”

Learning to handle bees without harming them or getting stung is key to another aspect of Keller’s lessons: collecting bees to breed them locally.

“We collect bees anywhere we can we pull them out of houses – wine barrels – anywhere we can get bees,” he explains. “We pull them out of car speakers inside a car. What we’re doing is we’re isolating them, hive them up, give them ideal conditions so they can thrive watch them for a full year.” Keller adds that “if we see the bees that really thrive in this area, we’ll take away the queen, let that colony raise a new queen from us and what you’re doing is trying to isolate genetic stock that has the resistance you are looking for that are dominant in the queen.”

Henry Cutting, the outspoken eighth grader, says humans should now put the health of bee populations before their demands for bee products. “I think a lot of beekeepers are about getting a lot of colonies going pleasing their clients, getting a big amount of honey, but it’s great having Mr. Keller as our teacher because he’s really is teaching us to care about the bees and doing what’s best for them,” he told FSRN. “Last year, we got a small amount of honey but we made a strong base of bees, and in the long run it’s better to have a healthy good breed of bees as opposed to just reproducing in mass quantities.”

Rob Keller says there’s no silver bullet for solving the bee crisis. But through classes like Keller’s, kids are learning that they can assist in colony recovery by becoming the new stewards of sustainable beekeeping.