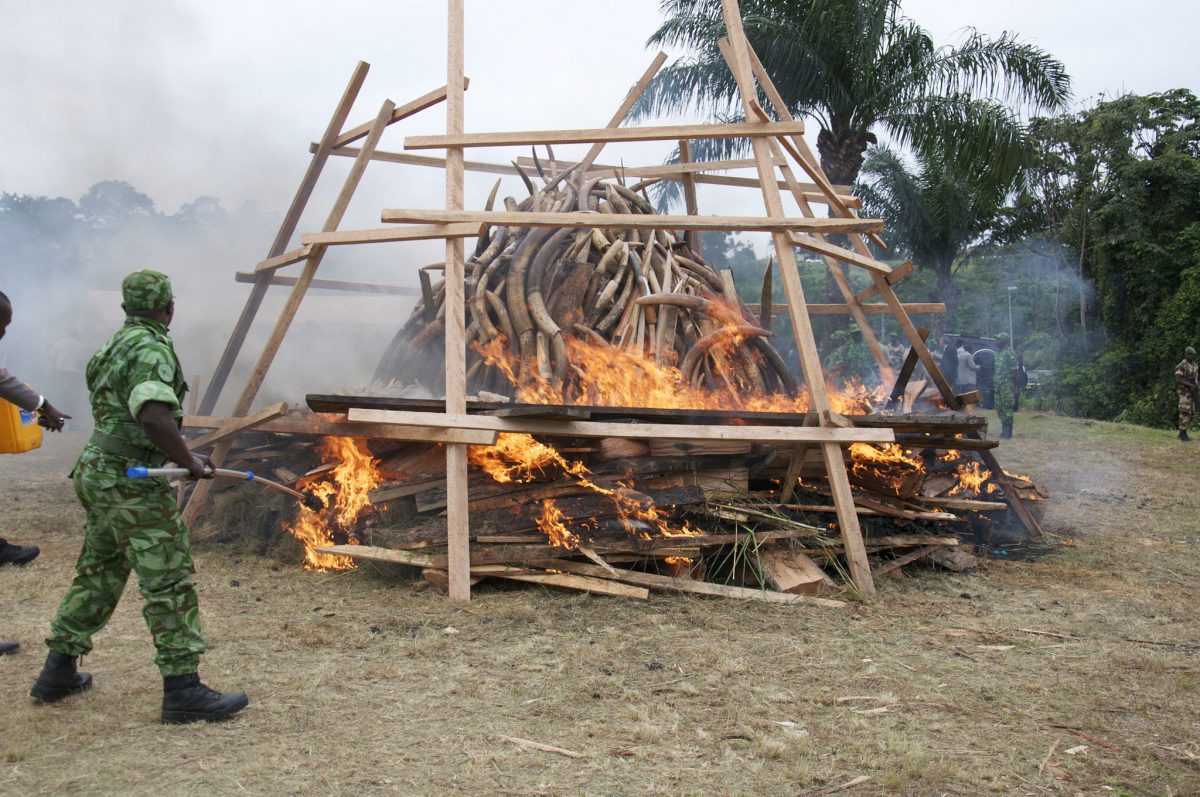 Pyres of ivory like this are burned by countries across Africa in an effort to discourage poaching. (Photo credit: International Fund for Animal Welfare Animal Rescue Blog via Flickr / Creative Commons)

In Africa, wildlife groups say rising ivory prices are accelerating the poaching of endangered elephants. The Kenya-based group Save the Elephants reports prices have nearly tripled in recent years driving a wave of poaching in which n at least 100,000 animals have been slaughtered between 2010 and 2012. But as FSRN’s Ngala Killian Chimtom reports, African countries are stepping up enforcement and interdiction efforts across the continent.

Elephants trumpeting have long been a familiar sound for locals here inside Cameroon’s Bouba-Djida National Park. But these sounds are now receding, as the enormous mammals face increasing threats from poachers.

Exact statistics are not readily available, but Kenya-based campaigner Frank Pope of Save the Elephants told FSRN that the illegal ivory trade in Africa has reached an alarming scale.

“More than 100,000 elephants were killed in just three years between 2010 and 2012, and it doesn’t look like there has been much decrease in the rate of killings since then,” Pope points out. “And so many populations are being wiped out in Central Africa, and East Africa is also suffering from unsustainable declines, and even the previously immune populations of Southern Africa are starting to be affected now.”

“This ivory we are talking of was put in boxes as if they were dresses, so you will normally not guess that something is hidden that far,” Njiforti explains. “The people have developed all types of means and you cannot check everybody. It’s a very difficult thing.”

That’s because the global ivory trade has an estimated value of $19 billion. Ivory ranks fifth after illicit drugs, people, oil and counterfeit currency.

Asia is a major market for ivory. It can fetch around $1,000.00 per kilo ($455.00 per pound) on the black market in China and neighboring countries says Pope of Save the Elephants. He says it’s this economic reality that drives poaching.

“The high price of ivory attracts criminal cartels who make money off smuggling ivory, along with other contraband, like drugs and weapons and sometimes people, and those trafficking networks then incite people to poach ivory and make money by selling it to these criminal cartels,” explains Pope.

Governments across Africa are sending a strong message to the traffickers, in attempts to illustrate their political will to reduce the illegal trade. Ivory is being publicly destroyed.

In April of this year, Kenyan President Uhuru Kenyatta oversaw his country’s annual ivory burn, the largest in history. Some 105 tons of elephant ivory, 1.35 tons of rhino horn – which combined could fetch around $172 million – were torched with great fanfare.

In Cameroon, the Forestry Ministry set fire to 3.5 tons of elephant ivory with U.S. Ambassador to the United Nations Samantha Power in attendance to signal international support.

“By burning this pyre, the government is sending a clear message to all those who seek to profit from this monstrous trade,” Power says. “A message that the only place ivory belongs, and the only place where ivory has value, is on elephants.”

Critics see the burning of ivory stockpiles as money going up in smoke, advocating instead that the ivory could be seized, sold and its proceeds invested. Campaigners in the field say police action is not enough to stop the ivory trade. Many of those involved are driven by desperate poverty and the returns outweigh the risks.

The poaching of animals for ivory has also had a human cost. In April, a wildlife warden, known here as an eco-guard, was captured and beheaded in Cameroon’s Faro National Park. Poachers were suspected.

Natural ecosystems often develop a web of interdependence, and the continued poaching of large mammals, such as elephants, could destabilize such interdependence and become a danger to vegetation, given that mammals are great agents of seed dispersal.

Cameroon’s wildlife ministry says it will continue to invest in eco-guards. But officials here say that will do little unless the countries that harbor illegal ivory markets do their part.