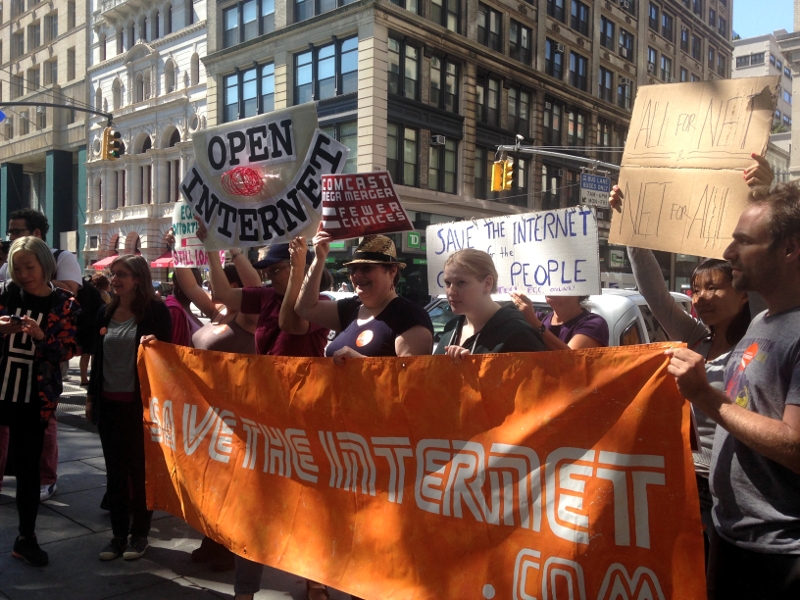 Today marks the final day the Federal Communications Commission is accepting public comments on proposed rule changes for the open Internet. Advocates of net neutrality say the proposal submitted by FCC Commissioner Tom Wheeler, a former cable industry lobbyist, would create a two-tiered internet with premium fast lanes for those able to pay for faster content delivery. Ahead of the final day, the FCC had already received a record-setting 2.5 million comments on the issue.

Around 50 people gathered outside of New York’s City Hall today to show their support for net neutrality and to publicly oppose the proposed merger of Comcast and Time Warner. The two largest cable providers in the US are seeking regulatory permission to consolidate their multi-billion dollar operations. A simultaneous rally took place outside of Comcast headquarters in Philadelphia.

FSRN’s Rebecca Myles spoke with rally attendees in New York City about their reasons for taking their digital demands to the streets.

Sue Tartleton, founder and owner of Celebrate You: I use the internet a lot. I have several different businesses and they require internet access. It has enabled me to have a livelihood and I feel very strongly that would disappear for small businesses. I also feel this is a national treasure. I think the internet is our national treasure but it also spreads across the world. And I have a very strong feeling if we just communicated more with other people we would break down a lot of barriers that are up, and if we take that away, then we are back to having our own little communities with our own separate lives with our own little belief systems and I believe its time we opened up to the world.

Craig Aaron, President of Free Press: The beauty of the open internet is that when you go online, you can go wherever you want, do what you want, download whatever you want. You don’t need permission from a phone company to make your website work. You lose net neutrality, that all goes away and suddenly you’re in a tiered system with fast lanes for the few and slow lanes for everybody else. That’s not a world I want to live in.  The internet has been such an unrivaled source for free speech, for democratic participation, for economic innovation, I don’t want to lose that. You lose net neutrality, and there’s a real danger of losing everything that has made the internet so great.

Jennifer Pozner, Executive Director of Women in Media & News: The loss of net neutrality for me personally would mean a lack of access to readers, it would mean a lack of access to information that I rely on to inform myself as a citizen in this country. It’s the flip side of the coin, right? As an independent journalist and a media literacy educator, I rely on the internet to get my messages out, to get my articles out, to get my independent videos out. I rely on the internet to build relationships with media producers, with fellow activists, with advocates, and to get out my education materials to youth and to other people who need media literacy. But at the same time, I am citizen of this country and I need a free and open internet so I can get uncensored, equal access to the information I need to make adequate, accurate decision, informed decisions on public policy, on legislation on cultural issues.

Leon Grombaum, internet user: I am concerned generally about loss of options, as it is there are so few providers. Concerned about rising costs and also control over the flow information. Really everything increasingly is being channeled through the internet so if it is the hands of one corporation who knows what those ties are to the government and some kind of emergency situation we suddenly may be left with no ability to communicate. There’s a lot of issues involved. Just the idea that we have something that is pretty democratic and its being threatened and that is the main concern.