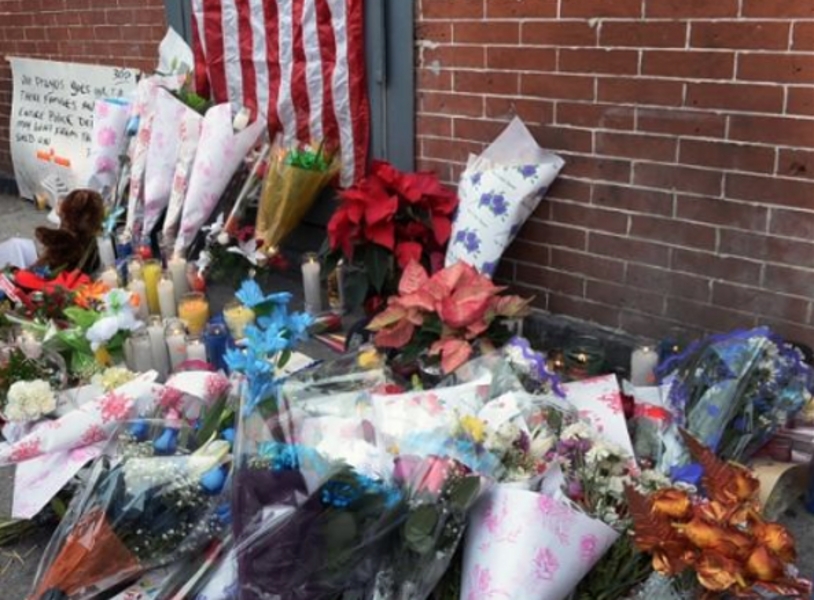 Protesters took to the streets of Milwaukee, Wisconsin today after the county district attorney’s office announced that a white police officer there will not be charged in the shooting death of Dontre Hamilton, a mentally ill, unarmed black man last April. It’s the third announcement in a month that a police officer will not face criminal charges for killing a black man.

In the case of Dontre Hamilton, the officer – Christopher Manney – was called to check on the welfare of a man sleeping in the park. The two allegedly struggled over the officer’s baton. Manney shot Hamilton 14 times, a use of force county prosecutors determined was “justified self-defense.” Manney was fired from the force for not following protocol established for interactions with mentally ill individuals, despite having identified Hamilton as such.

Today’s protests of the lack of criminal charges in the Hamilton case come as some police and government officials in New York are calling for demonstrations to stop in the wake of the fatal shooting of two NYPD officers over the weekend. Protesters say the nationwide “Black Lives Matter” movement is unrelated to the killing in New York City, despite attempts to blame proponents of police accountability for the acts of a lone gunman. Linda Perry Barr has more from New York City.

Mayor Bill de Blasio issued a call Monday afternoon for all politics and protests to wait for another day, saying the fatal shooting of two NYPD officers on Saturday “was attack on all of us; every single New Yorker and we have to see it as such.”

The shooter, 28-year-old Ismaaiyl Brinsley, ambushed the officers in the Bedford Stuyvesant neighborhood as they sat in their parked police car. After firing into the vehicle and killing both officers, Brinsley ran into a subway station and killed himself.

Just before shooting the officers, he approached people on the street and asked them to follow him on Instagram. Then he told them, “Watch what I’m going to do.” Brinsley had a lengthy criminal record, and may have had a history of mental instability.

According to NYPD Chief of Detectives Robert Boyce, Brinsley had ranted on Instagram, displaying “anger against the government. There is one where he burned the flag and made some statements, others where he talks of anger against the police. He specifically mentions Michael Brown and Eric Garner.”

Boyce said other postings showed self-despair, anger at himself and where his life was at that point. Hours earlier, Brinsley shot and wounded his ex-girlfriend, Shaneka Thompson, at her home outside Baltimore. Seven hours later, Baltimore-area police warned the New York City Police Department that Brinsley was in the city and bent on violence. But it was too late to stop the murders. Why it took so long for the Baltimore police to warn the NYPD is still unknown, especially since they were able to ping his phone and know where he was headed.

In the Brooklyn community of Cyprus Hills, home to NYPD officer Rafael Ramos, family and elected officials gathered Sunday evening. The officer’s aunt, Lucy Ramos, called for unity between the NYPD and the community.

“I hope and pray we can reflect on this tragic loss so we can move forward and find an amicable path to a peaceful co-existence,” she said. “We would like to extend our condolences to the Liu family also.”

US Congress-member Hakim Jeffries said he was hopeful “that this tragedy is not in vain and we will be able to heed the words of the Ramos family and bring the city together to heal.” He added that first, “we have to be respectful to the Liu and Ramos families, make sure they are appropriately buried as the heroes they are and figure out how to come together as the resilient city that we are.”

Outside the 84th precinct in downtown Brooklyn, Clara McKoy expresses the frustration and sorrow of many in the city who see Brinsley’s act as a product of the ongoing struggle against police brutality. “I am so hurt and sad because they are sitting in their car and you just walk up and shoot them like that,” she said. “I am so speechless, all I can do is cry. This is not right and this has to stop, because the police is out to protect us.”

The head of the police union, Pat Lynch, who continually fans flames of division between the police and the administration, said the mayor has blood on his hands, and so do the protesters.

But Jose Lopez, lead organizer with Make The Road New York and an appointee to President Obama’s Task Force on 21st Century Policing, disagrees. “I think it’s dangerous. I think it’s divisive. We’re at a moment to come together.”

Lopez says that the national movement, one that’s grown since grand juries returned no indictments for officers in the deaths of Mike Brown and Eric Garner, is simply calling for an end to discriminatory and abusive policing practices in communities of color. “This is a movement over the past few weeks that has been disciplined that believes in justice, respect and that includes safety for all people and so in no way do we condone violence,” he told FSRN. “All we want to see justice more than anyone else especially in our communities. We want to make sure that our communities are safe and obviously the killing of the officers in Bed Stuy are counter to that goal.”

NYC Public Advocate Tish James said, “divisive rhetoric will do nothing to honor the dignity of these two fallen officers or sooth the piercing pain of their families. A demented assassin’s bullet cannot silence the cries for reform.” She added proponents of accountability measures “will continue the important conversations around policing in our city.”