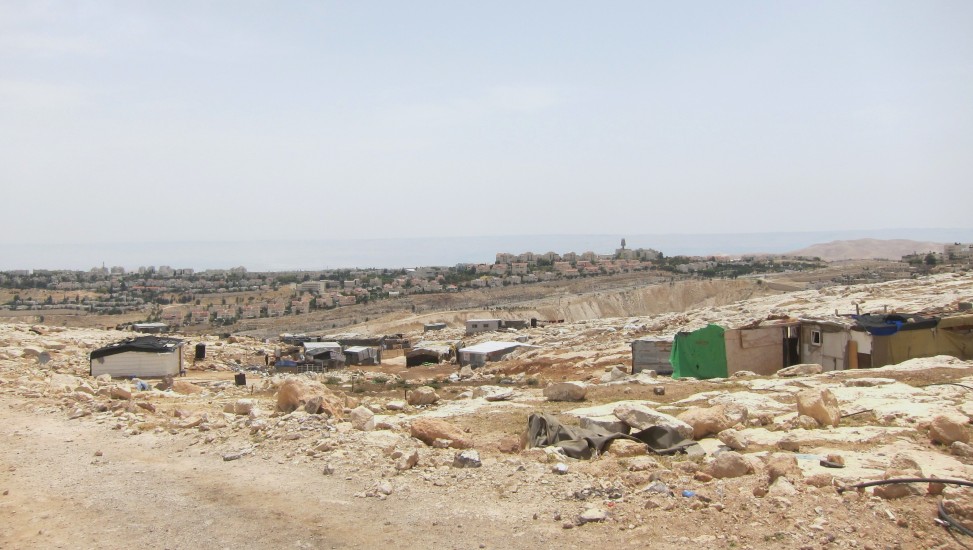 Bedouin communities in the West Bank have just one more week formal objections to a master plan for a new township north of Jericho. The plan includes moving the Bedouin out an area known as the Jerusalem Periphery or “E1,”  — a strip of land that connects the West Bank’s north to its south, and to Jerusalem. FSRN’s Dalia Hatuqa reports that if the Bedouin are removed, Israeli settlements could effectively encircle the Holy City, and thereby block attempts to make its eastern part the capital of a future Palestinian state.

A pile of rubble – with metals rods protruding from the concrete slabs – is all that’s left of Suleiman Kayed’s home in the Bedouin community of Jabal Al-Baba. The area is located in the path of a strategic Israeli development and the Bedouin encampment faces permanent eviction.

Earlier this year, with no time to salvage any of the furniture, Israeli authority bulldozers tore through Kayed’s house. In the aftermath, the European Union provided the family a temporary trailer home. That, too, was dismantled and confiscated, leaving his family of ten twice displaced in less than a month.

Kayed, who lost his sight to an illness nearly 30 years ago, says standing here where his home once stood fills him with anger. “We refuse to be relocated. If we are forced to, then we want to return to our original lands in the Negev; otherwise we’re staying.”

The residents of Jabal Al-Baba – like most Bedouin from this area – were expelled from the Negev desert after the 1948 war. Many made their way to the Jerusalem periphery in the 1950s where they settled and raised families. Many raise and breed animals for a living.

Jabal Al-Baba is just one of 46 Bedouin communities that Israeli authorities plan to move. According to the Office for the Coordination of Humanitarian Affairs, more than seven thousand Bedouins would be relocated to different townships in the West Bank. Israel puts the number of Bedouin who would be affected at approximately 1,500.

Issam Aruri, the director of the Jerusalem Legal Aid and Human Rights Center, says hundreds of families “will be forced to live on limited areas, not more than 500 square meters per family which is not sufficient to keep their livelihoods as people depending on grazing and raising animals to maintain their life.”

Some human rights groups believe Israel is demolishing Bedouin structures and pushing for wholesale eviction as part of a land grab in what’s known as E1; a 4.6-square-mile area of East Jerusalem that stretches to the Israeli settlement of Ma’ale Adumim.

Ziad Abu Ein, head of the Palestinian Settlement and Separation Wall Commission, says the purpose “is to confiscate thousands of dunums of land and to cut the West Bank’s northern areas from its southern ones, so a Palestinian state would be inviable.” Ein refers to dunums, which are land measurement units commonly used in the region. There are four dunums in an acre of land.

E1 is a politically sensitive area that will, if developed, create an urban bloc between the settlement of Ma’ale Adumim and Jerusalem. This will isolate Palestinians from Jerusalem and disrupt the territorial contiguity between the northern and southern parts of the West Bank. But Israeli authorities have long insisted that Palestinian territorial contiguity can be ensured through a series of tunnels connecting the bisected areas.

They also say that moving is in the Bedouins’ best interests –and will improve their way of life with access to water and electric services, as well as main roads, schools and businesses. But Aruri says that forced relocation of residents from Jabal Al-Baba and the other communities will also sever their social and economic ties to Jerusalem and Ramallah, where they often sell their meat and dairy products.

“It’s very important to the Palestinian community in general and the economy in particular to keep and preserve their lifestyle as one of the most important resources of production of food,” he says. ” They produce 13% of the Palestinian need of dairy and red meat products.”

U.N. Relief Agency for Palestinian Refugees- or UNRWA – spokesperson Christopher Gunness has described Israel’s relocation of Bedouin communities as a “stake through the heart” of the two-state solution to the conflict, because the plan will cut the West Bank in half and potentially make Jerusalem inaccessible to thousands of Palestinians.

For Kayed and his family, it also means months of a long and convoluted legal process after the November first deadline for objections passes. They’ll continue to fight the E1 project and hope to prevail before time runs out and they are forced to relocate.