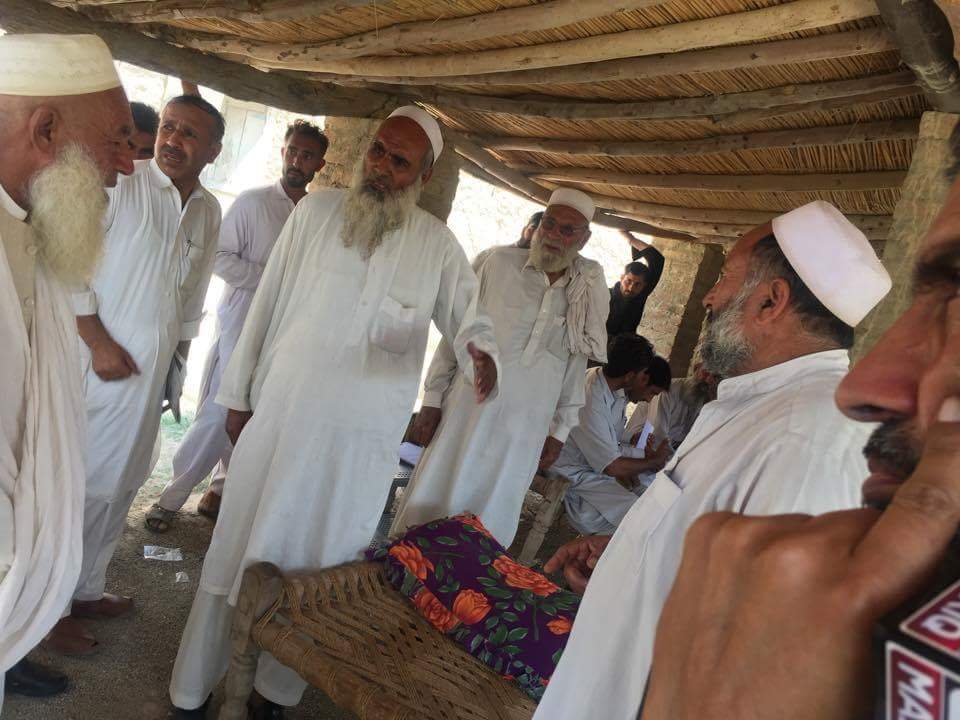 Militancy linked to the Taliban continues to sow terror in the tribal regions spanning the borders of Pakistan and Afghanistan. While the tactics of the extremist group were used to mobilize international public opinion in favor of an invasion of Afghanistan, the ongoing violence suffered by civilians in the area now fails to grab world news headlines. Area locals are now building on so-called peace committees in an effort to oust militants. Robert Packard reads for Gabe Matthews, who visited one such village, struck by an attack not long ago.

A crowd gathers outside the scene of a bombing attack in the Payee Khan village in Pakistan’s Mohammand Agency. It’s a culturally conservative area located in the tribal belt that straddles the border with Afghanistan. This time, the target was a mosque during Friday prayers.

Haji Gul Pur, 53, was in the mosque when the explosion happened just outside. He recounts the events as men gather around to hear the details.

“I heard a loud yell of ‘Allahu Akbar’ followed by a big bang. I tried to motivate young men not to lose courage. There was dust all around and I found dead bodies everywhere when I exited the veranda,” Gul Pur recalls. “Soon after, I learned that two strong young men stopped the suicide bomber from entering the mosque which lowered the death toll.”

At least 36 people died in the attack, many were children. The victims included four of Gul Pur’s nephews, but he refuses to cower.

Tribal elders in the village have started to form self defense groups with local youth to fight the Taliban and other militants who attack tribal people. They perform duties like staying armed and keeping watch at night, and they take part in training exercises.

Both the Taliban and ISIL are active here in the Federally Administered Tribal Areas,  or FATA, an area with low education and employment rates, where religious militants have used institutional vacuums to grab power for themselves.

“We have been the custodians and guardians of our soil for centuries, and have fought for the safety of our land and country. In the past, we fought against foreign enemies, but recently we are fighting against the traitors who kill their own people,” Khan explains. “We are trained soldiers, so we gathered mostly young, local people and formed groups called ‘peace committees.’ We have been successful in that we have saved our lands from the militants’ rule.”

While peace committees aren’t new, they’ve expanded considerably here in the village since the attack on the mosque.

The government initially granted small stipends to peace committees elders when they were first started in the country, but stopped payments six years ago, although moral support continues.

Wealthier peace committee members provide financial support, especially if anyone is injured during fighting. And elders also take on conflict resolution within the community, to minimize internal disputes and sustain local unity.

According to estimates from Pakistan’s military, some 18,000 civilians and 5,000 soldiers have been killed in terror attacks since 2001.

The last official military operation launched to wipe out militancy in the area was considered a success, with most of the area purged of militants, but certainly not all.

Mahmood Aslam, political Agent and chief executive of the area responsible for law and order, is optimistic.

“We have arrested almost 90 peacent of culprits who were involved in terrorists activities in the area,” Aslam says. “Therefore, we can ensure that there will be complete peace in the entire area soon.”

But despite years of offensives and operations, the attacks continue. The local residents here are determined and committed to resisting the militants’ brand of Islam – and the terror that goes along with it.