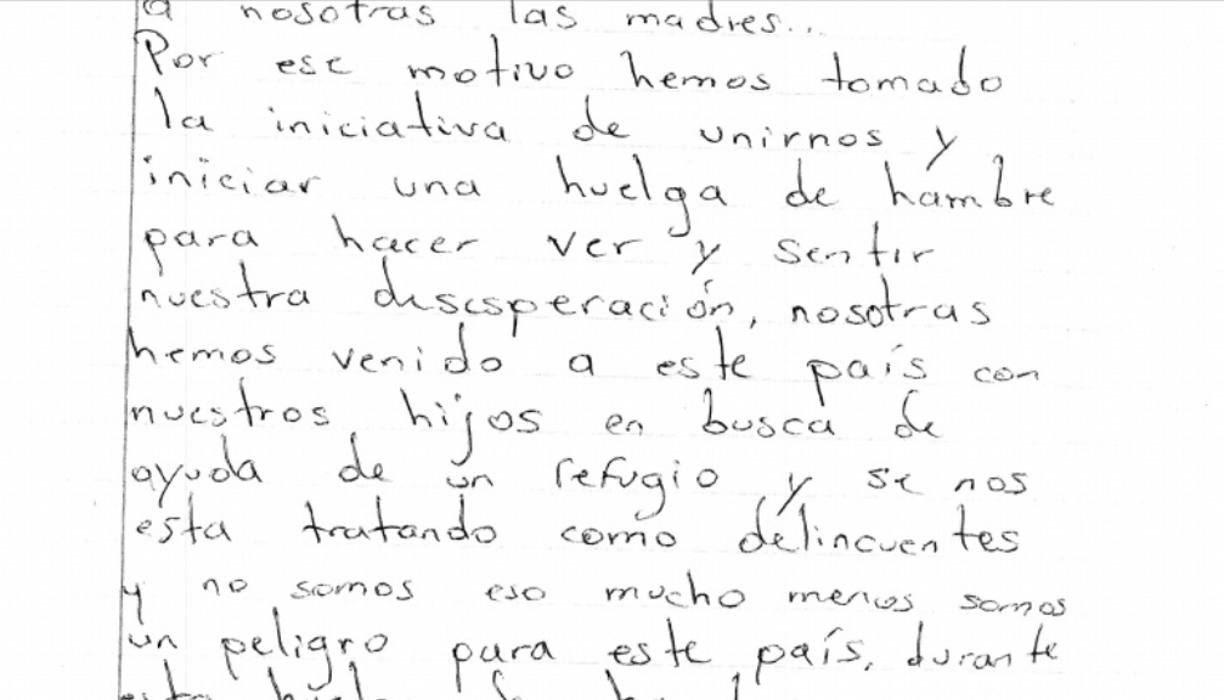 Excerpt of a handwritten letter signed by 78 mothers detained at the Karnes detention center, announcing the Holy Week fast.

Asylum-seeking mothers held in detention with their children at a for-profit facility in South Texas have initiated a second protest fast and work stoppage calling for their release. The women have all passed what is known as the credible fear test to qualify for an asylum request, but are still held in prison-like conditions with their children while their cases creep through a backlogged system. Shannon Young has more.

This is the second action in a month organized by mothers at the Karnes Residential Center in South Texas to protest their continued detention and that of their children. When they ended a five-day Holy Week fast on Good Friday, they gave authorities ten days to address their concerns. That deadline came and went this week and on Tuesday, ten mothers reportedly resumed their protest action. They say they will not work and will refuse daytime meals, calling for their families’ release and drawing attention to the conditions at the for-profit facility owned and operated by the GEO Group.

Kenia Galeano participated in the first fast and was released on bond with her two-year-old son before the start of the second. She says that she can’t completely enjoy her freedom knowing that others remain detained in the conditions she just left.

“I would hear Alexis every day tell Delmi that he needs to get out of there,” Galeano said, specifically referring to her former cell mate Delmi Cruz and Cruz’s 11-year-old son Alexis as detainees in need of urgent release. “The boy would cry, especially at night. He’d lie down in bed, pull the sheet up over his head and cry about how he wants to leave. Honestly I want all of the mothers to get out of there, but especially Delmi because I witnessed how much she and her son are suffering. The boy is deeply depressed. He’s only 11 years old and has been locked up in that place for nearly eight months and it’s not right that they’re still there.”

The mothers and children held at Karnes have passed a screening process that determined they do have credible fear of violence or persecution, adding merit to their asylum claims.

“In my view, there’s no way to detain families humanely,” California Representative Judy Chu said at a U.S. House Judiciary Committee hearing Tuesday, raising concerns about the mental health effects of detention on children who have already fled their homes due to violence. “When I first learned that the average age on a child in family detention is six years old and there are even babies and toddlers being detained, I was truly shocked. As a psychologist, I know the mental health concerns that children and families in detention face. Detention in jail-like facilities re-traumatizes victims of violence, and children in particular.”

Immigration and Customs Enforcement Director Sarah Saldaña was also at the Judiciary Committee hearing. In a written statement submitted along with her verbal testimony, Saldaña indicated that ICE had “allocated substantial resources to add detention capacity for family units, and opened three additional facilities for this purpose.”

In hard numbers, that means an increase from just under 100 beds to around 3000 specifically allotted to detain mothers and children. This, despite an injunction issued in February by the D.C. Circuit Court barring the federal government from using national security arguments to justify holding mothers and children in immigration detention.

“Unfortunately, the injunction did not have a real, tangible effect for the women who are detained,” explains Jonathan Ryan, an immigration attorney and executive director of RAICES, a San Antonio-based group that provides pro-bono legal assistance to refugees and immigrants, including a number of detainees at Karnes. “ICE merely responded by – in lieu of opposing bonds – by assigning very oppressively high and arbitrary bonds of $7500, $10,000, $15,000. So, what went from no bond really just evolved into a bond that was unattainably high.”

During her testimony this week before the House Judiciary Committee, ICE Director Saldaña blamed high family detention rates on a backlog in the immigration courts and used the opportunity to request more funds.

“I think the last number I saw was something like 480,000 backlogged cases in the immigration courts that are under the Department of Justice,” Saldaña testified. “And so I urge this committee to the extent there’s anything you can do to help those courts to get more judges, that would help us with our disposition. And our request for 2016 for more lawyers to assist us to get these people through the process so they don’t have to be waiting or detained.”

The Karnes family detention center is located in the middle of the Eagle Ford shale region, one of the largest concentrations of fracking operations in the world.

Kenia Galeano, the woman recently released from the Karnes center says the water at the facility tastes horrible and many detainees opt to work for $3 a day in order to buy their children bottled water and food from the commissary.

Campaigners opposed to for-profit detention of families plan to protest outside of the massive new family detention complex in Dilley, Texas on May 2nd to kick off a week of action ending on May 10th: Mother’s Day.