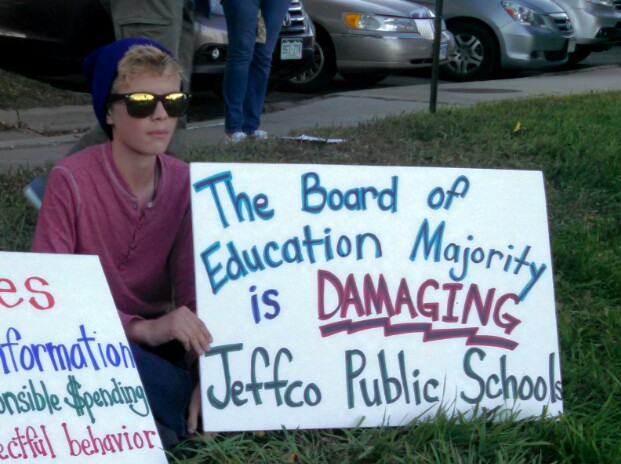 The school board of Jefferson County, Colorado  approved a controversial measure Thursday night to review the curriculum of Advanced Placement U.S. History courses.  The proposal is a watered down version of one that sparked weeks of student walk-outs and has garnered national attention. From Denver, Hannah Leigh Myers has this report.

The student-led protests began when conservative school board member, Julie Williams, proposed the creation of a committee to change the Advanced Placement U.S. history curriculum to emphasize patriotism, positive aspects of U.S. history and the benefits of the free market system while downplaying lessons about civil disobedience and defiance of authority.

AP students chose to respond with civil disobedience of their own by organizing the first of several walk-outs on September 19th.

Critics of the protests say unionized teachers are using the history curriculum and students as pawns in an ongoing contract dispute. But Bethany Keupp, a high school senior who helped start the protests on social media, says that claim is inaccurate.

“The teachers union has not in any way influenced the student’s opinions nor have the teachers,” Keupp told FSRN. “The students have been influence by students alone. We’ve done our research all by ourselves and the teachers have not said, ‘Hey, go protest’ – they just simply did their own protest and we did too.”

Keupp says the proposal to potentially alter AP U.S. history content along ideological lines was the final straw for students, teachers and parents.

Discontent between members of the community and the school board has been rising since a conservative majority took power last November.

Kerrie Dallman is the president the state’s largest teachers’ union, the Colorado Education Association. She is also a former social studies teacher in Jefferson County. Dallman says Julie Williams seems to pushing an agenda instead of working from knowledge of the new AP U.S.  History curriculum.

“When you have a school board member like Julie Williams who puts out a press release making all kinds of claims about how AP U.S. History is not covering basic historical figures like Martin Luther King and others – George Washington,” says Dallman.  “And then somebody goes and looks at all ten of the approved texts for AP U.S. History in Jeffco public schools and finds every single one of the historical figures Julie Williams said is not covered actually in the text books and you have AP U.S. History teacher coming out daily saying ‘Absolutely we teach this,’ Julie Williams clearly hasn’t done her homework. She is acting on somebody else’s behalf. That to me is disturbing and it’s further evidence of the reason why politics has got to get out of Jeffco public schools.”

Texas, Tennessee, Washington and Illinois have seen similar attempts by school boards to change curriculum to reflect a more conservative ideology, but no other place in the nation has experienced protests like Jefferson County, Colorado.

Thursday night’s school board meeting – the first since Williams made her announcement – drew hundreds of student protesters and their supporters. Despite critics who have labeled the protests unpatriotic, former Jeffco public school student Devi Yanirao says love for her country is precisely what motivated her to support current Jeffco students.

“We want to be able to show both sides of American history, both the negative aspects and the positive aspects and that we shouldn’t just focus on the positive ones,” she said. “We’ve made good decisions and bad decisions as a country and that both sides need to be shown to future students so that they can understand our history and where we are coming from and why we are here to today and the way we are today.”

At the start of the tense school board meeting, Julie Williams said her “proposal was aimed to increase community engagement and transparency so people do know what is being taught to their children and as a board we can review the curriculum as we are responsible to do.” The large crowd, which overflowed into the parking lot, seemed unconvinced.

Some of the most controversial language in William’s proposal has already been removed but at Thursday night’s Jefferson County school board meeting, opponents delivered a petition with more than 40 thousand signatures asking that the proposal be killed altogether.

Despite the petition and public outcry the conservative majority voted 3-2 to move forward with plans to create a committee to review AP U.S. History content. As part of a compromise, students, parents, teachers and other approved citizens will now be able to join the committee.

But protesters say they plan to keep up their civil disobedience campaign until they are confident that partisan politics and ideological whitewashing are kept out of their public schools.