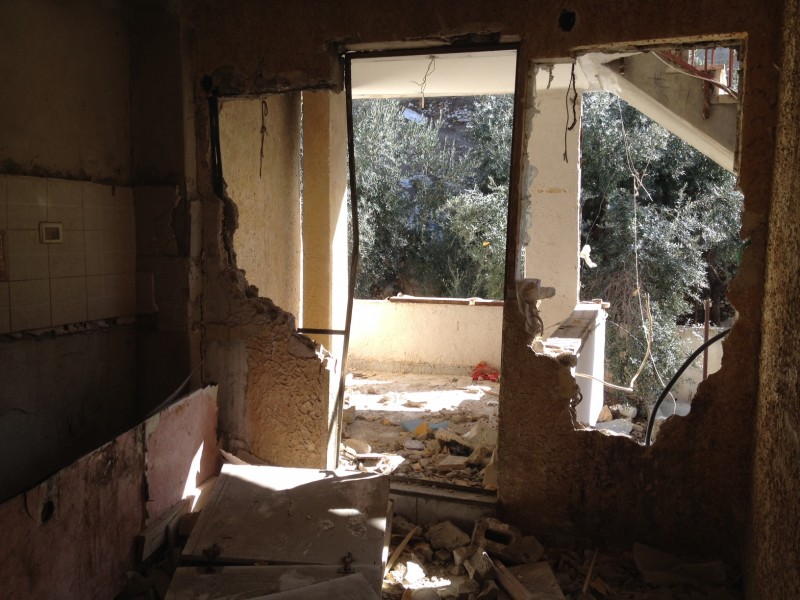 In Jerusalem, tensions continue to run high. Eleven Israelis and more than 17 Palestinians have died in a recent cycle of violence in Jerusalem, the West Bank and Israel proper. The friction began in July when four teens were killed, three Israelis and then one Palestinian, followed by Israel’s seven week assault on Gaza. Compounding the tension is a campaign by right-wing Israeli activists and politicians to change the religious status quo at the Temple Mount, also known as the Noble Sanctuary — a holy area in Jerusalem that’s home to the al-Aqsa mosque.

Now Israel has renewed the practice of destroying the homes of accused Palestinian attackers and their families in what they call a deterrent, the United Nations this week called the demolitions a violation of international human rights law. Dalia Hatuqa has more from Jerusalem.

Several members of the al-Shaludi family live in the same multi-unit apartment building, which was partially destroyed. Nibras al-Shaludi describes what happened: “The soldiers took us to a tent nearby. There was an army vehicle and some policemen. At 4 am we heard an explosion and we realized our apartment had been blown up. The little ones started to cry. Our home was destroyed. In the other apartments in the building, they had urinated on the beds, and they had broken so many things.”

AbdelRahman al-Shaludi’s deadly attack was one of a series that have left at least 11 Israelis dead in recent weeks. During the same period, Israeli forces have shot dead 17 Palestinians, including two unarmed teenage boys.

Tensions have been running high for months, especially in Jerusalem, following attempts by right-wing Israeli groups to enter the al-Aqsa mosque compound, known to Jews as the Temple Mount, to pray. The al-Aqsa mosque one of the holiest sites for Muslims worldwide.

According the religious site’s rules, non-Muslims can enter the grounds, but cannot pray. This, as Israeli authorities have restricted the numbers of Palestinian worshippers entering the mosque. Compounding the unrest is an ongoing push to expand Israeli settlements in the Palestinian part of the holy city.

In response to recent attacks targeting Jews, Israeli authorities have reinstated a policy of demolishing the family homes of the men who carry out attacks. The stated aim of the policy is to deter future attacks. But human rights groups say the practice is harmful to families who have nothing to do with the violence.

Sarit Michaeli is a spokeswoman for B’Tselem, an Israeli human rights group.

“The policy of demolishing houses as punishment is a deliberate policy of harming innocent people. Those Palestinians who are responsible for the abhorrent attacks in Jerusalem recently and in the West Bank are either dead or facing trial,” Michaeli said. “The idea behind it according to the government is deterring other Palestinians from attacking Israelis through this kind of collective punishment.”

Back at the Shaludi apartment, piles of cinder blocks are all that’s left. Cracks and holes fill the exterior walls. And a car parked below sits flattened by the falling debris.

AbdelRahman’s mother, Enas, says for now, the family will stay with relatives in the building. She is pained by the loss of her son and home. Even her husband had to go to work immediately after the demolition because he could not afford to take the day off.

“For years Israeli authorities have been collectively punishing Palestinians by demolishing their homes if someone carries out an attack and those attacks have not stopped; on the contrary, violence breeds violence. Israel continues violating al-Aqsa’s sanctity and cracking down on Palestinians in Jerusalem, by restricting their movement on checkpoints, through high taxes. All of this leads to more explosive reactions,” said Enas.

Just a few miles away, in other East Jerusalem neighborhoods like Abu Tor and Jabal al-Mukaber, other families of attackers were awaiting a similar fate. The demolition of their homes expected in coming weeks is bound to add fuel to the raging fire in the holy city.