Thanksgiving Special: 2014 in the Indigenous Americas 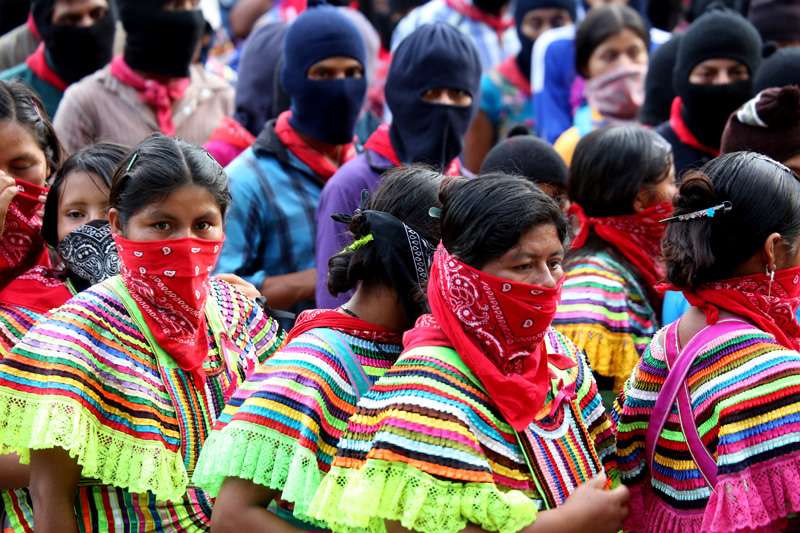 A thank you message from FSRN

Before we begin, we’d like to take a moment to give thanks to everyone who helped FSRN come back from hiatus.  This time last year, FSRN was off the air. We worked hard behind the scenes to bring the program back, launch a new website and revive our network of reporters. Listener donors, large and small, provided support even when we no newscast to air. That vote of confidence is something for which FSRN will always be grateful.

We relaunched online in February, producing audio segments and photo essays, and began offering a weekly program in May. We’ve stayed true to our mission to provide factual reports on important international and domestic news stories neglected or suppressed by the corporate press and to amplify the voices of those ignored and unheard. Today, we highlight our favorite 2014 stories on indigenous struggles from the Americas.

Lakota environmental activist Greg Grey Cloud captured national press attention last week when he belted out a victory song from the Senate gallery just after a measure to approve construction of the Keystone XL pipeline failed by a one-vote margin. Native American communities along the length of the pipeline’s proposed path have opposed the  project that would transport tar sands oil – or bitumen – from Alberta, Canada to Texas Gulf Coast refineries. In the final weeks of the lame duck Congressional session, the pipeline project made a surprise appearance on Capitol Hill and Lakota leaders compared the push to move it through to an act of war. For more on the issue, I spoke with Tim Giago, veteran journalist, Oglala Lakota and publisher of Native Sun News.

The Keystone XL pipeline has long sparked protests around the country and in the nation’s capital.  In April,  thousands of people came to Washington DC’s National Mall to protest the proposed northern leg of the pipeline. The action was a week of prayer and protest led by a group of indigenous activists and US landowners called the “Cowboy and Indian Alliance.” Reporter Alice Ollstein filed this story in April on how the coalition is fighting in the courtroom and in the streets.

Indigenous communities across the Americas often oppose mining on or near their land. Access to clean water is a central issue behind such resistance. In Ecuador, a Water Law passed in June prompted a coalition of indigenous and civil society organizations to march from the provinces to the capitol. Sofia Jarrin filed this report from Quito on July 2nd.

In Canada, members of the Grassy Narrows First Nation are still fighting for compensation and remediation 50 years after massive amounts of mercury were dumped in their water supply. The poisoning has affected the health of generations and they say the government has ignored their needs. In July, a delegation from the Grassy Narrows First Nation traveled more than 20 hours by car from their community in northern Ontario to Toronto to demand official action. Erin Hudson filed this report.

Agribusiness interests in Brazil are facing off against indigenous groups calling for official recognition of territorial claims. During the opening ceremony of this year’s World Cup, a Guarani Indian youth held up a small banner saying, in Portuguese, “Demarcation Now” – in reference to land recognition. Over 400 indigenous groups in Brazil are waiting for official recognition of their ancestral land claims, but Brazil’s powerful agricultural lobby is pushing for legislative measures to make sure it never happens. Lucia Duncan reported on the situation in July.

The Mayan-led Zapatista uprising continues to be one of the most important indigenous movements in the Americas. The rebel army known by its Spanish acronym as the EZLN went public on New Years Day of 1994 and has built up an autonomous system of traditional indigenous governance in its civilian base communities ever since.  But the civilian Zapatista communities have experienced a series of attacks over the years, including one in the Lacandon Jungle town of La Realidad which killed a well-respected leader and teacher, known by his alias, Galeano. Shortly after the murder, nearly 4000 people traveled to La Realidad to pay their respects. During the event, the EZLN´s iconic spokesperson, Subcomandante Marcos, made his first public appearance in five years only to announce his final act. Tim Russo brought us this report from La Realidad, Chiapas.

Music used in today’s program is by the NuJazz Trio and Greg Reiter, licensed under Creative Commons via jamendo.com.