Checkpoints and other restrictions put damper on Christmas tourism in Bethlehem 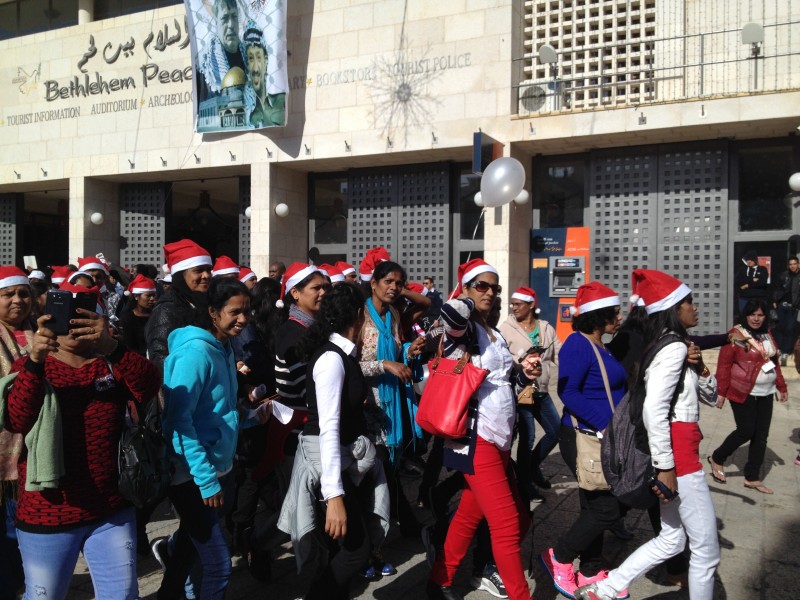 Christmas is an occasion that once attracted hundreds of thousands of tourists to Bethlehem, the biblical birthplace of Jesus. But the Palestinian tourism industry is reeling from the effects of Israeli settlements and a wall that separates Bethlehem from Jerusalem, the twin city just a few miles away. Israeli imposed restrictions and border controls also make it difficult for Palestinians to reap the benefits of tourists and pilgrims visiting Bethlehem in what’s touted as the most wonderful time of the year. FSRN’s Dalia Hatuqa reports.

At Manger Square in Bethlehem, a few steps away from where Jesus is believed to have been born, Indian migrant workers wearing Santa hats are celebrating. A group of tourists from Nigeria joins in, singing Christmas melodies.

The mood is festive, but it’s a far cry from how things could be had Bethlehem not been surrounded by a separation wall and settlements, say Palestinian officials.

Checkpoints add a layer of complication to independent travel to the city. Many pilgrims and tourists choose to stay overnight in Jerusalem, which is less than five miles away, and visit Bethlehem on day trips.

Tour companies charter buses to bring tourists through a checkpoint from Jerusalem, and once in Bethlehem, usher them to a few sites before heading back.

Vera Baboun, the city’s mayor, says Jesus’ traditional birthplace is not meeting its full tourism potential. “Bethlehem as a governorate has 82 percent Area C; 22 settlements, 32 all-together barriers,” she notes. “It’s highly paradoxical that Bethlehem, which gave the world a message of peace is not living in peace itself.”

Baboun – a Christian – is referring to Area C, territory in the West Bank that falls under the full control of the Israeli authorities as dictated by the Oslo peace accords signed with the Palestinians in 1994.

This means that Israel, and not the Palestinians, benefit from places like Qumran, where the Dead Sea scrolls were found, and Herodion, where King Herod the Great is believed to have been buried. Both sites are in the West Bank, but Israel administers and controls them.

Fadi Qattan is a Bethlehem-based expert on tourism. He explains how only a handful of Palestinian tour operators are allowed to work in Israel, and how local tourism is not tapping into the Arabs and Muslims in the region and beyond, because Israel controls the borders.

“In Palestine in 2014 we received four million visits. Why do we say visits? Because most of the tourists come in for a day, and they leave, which according to the UNWTO tourism definition are not tourists,” said Qattan. “A tourist is somebody who spends an overnight. The expenditure of those tourists is approximately $460 million. Recently with some of the donors we’ve done a study on Palestinian loss potential, and we’re talking about – in a best case scenario where we have sovereignty, control of borders, and those sites back to us – we’re talking about $1.8 billion yearly.”

Back at Manger Square, shop keepers are busy greeting and smiling at tourists. Business is good, some say, but it used to be much better back in the 90s, right after the Oslo peace accords were signed.

Asem Barakat, who owns a souvenir shop a few meters away from Manger Square, says the tourism sector was flourishing before the Palestinian Intifada – or uprising – against the Israeli occupation erupted in 2000. “If we were to look back to the situation before the Intifada, things changed dramatically,” he notes. “Things are worse. We have the wall, the checkpoints and political stalemate.”

Despite the difficulties, overnight stays in Bethlehem’s hotels have gone up by approximately nine percent since last year, according to the tourism ministry. However, the gains are less than expected, and overall revenue is down.

Rula Ma’ayah, the Palestinian Minister of Tourism, says the top three visitors to Bethlehem – Russians, Poles and Italians – tend to stay in hotels in the city, whereas Americans – who are bigger spenders – tend to overnight in Jerusalem, leaving Israel to reap the benefits of their visit.

The minister adds that expectations were high this year because of the Pope’s visit to Bethlehem earlier, but the summer war on Gaza had adverse repercussions. “When the Pope visited Palestine, we were very optimistic that his visit to Palestine – to Jerusalem and Bethlehem – will attract many tourists from the whole world,” she said. “When people from all over the world see the Pope walking around in Bethlehem, meeting Palestinians in Bethlehem without any problem, this will give a good image about Palestine and Palestinians, and that millions would like to come and visit if not this year then in the coming years.”

Despite the difficulties, Palestinians are hopeful that next year, more tourists and pilgrims will follow in the footsteps of Pope Francis, and that the tourism sector in Bethlehem will slowly begin to thrive.