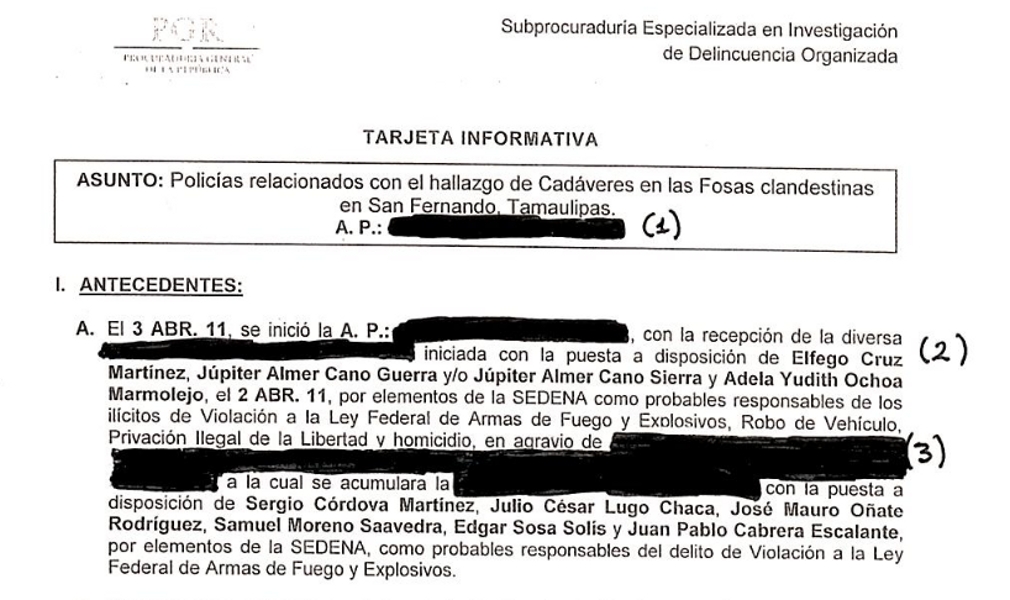 Portion of the redacted, declassified memo from Mexican federal authorities.

The mass abduction of 43 students in the the Mexican city of Iguala on the heels of a deadly ambush by police there drew worldwide attention to systemic human rights abuses committed by corrupt security officials. But newly declassified information about a 2010 massacre of 72 migrants in the town of San Fernando, and the discovery of nearly 200 bodies in mass graves there in 2011, sheds even more light on the close working relationship between organized crime and some police officials within the context of the so-called War on Drugs.

After a long legal battle which pitted Mexican transparency laws against national security exemptions, the federal government has finally released a brief internal memo about seventeen San Fernando police officials arrested in 2011 in connection to the discovery of mass graves containing migrants and bus passengers. For more on the case and the struggle to make government information about it public, FSRN’s Shannon Young spoke with, Jesse Franzblau, an independent researcher and consultant with the National Security Archive who has worked on the transparency requests in this case.

More more on this story, read “Unearthing the Truth: Mexican State Violence Beyond Ayotzinapa” by Jesse Franzblau for NACLA.