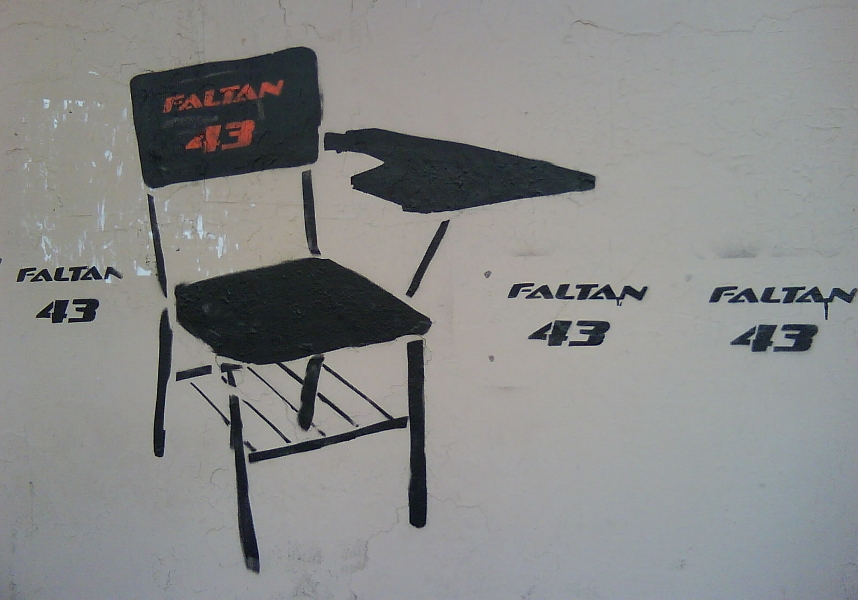 Mexican authorities have officially closed the investigation into the 43 students who went missing in Iguala in September. The case has become emblematic of Mexico’s larger crisis of disappearances at the hands of state actors and of the sometimes unclear line between authorities and organized crime. Shannon Young reports.

In a lengthy press conference, Mexico’s Attorney General Jesus Murillo Karam announced the end of the investigation into the fate of 43 students from the Ayotzinapa teachers college, declaring that the Guerreros Unidos organized crime group killed them all.

The centerpiece of the press conference was a 26 minute-long video re-enactment of the events of September 26th and 27th complete with computer animation, fragments of videotaped confessions and crime scene images laid over a bed of looped guitar riffs.

The official version of events rests largely on the statements of presumed members of the drug gang who say they killed the students, burned their bodies and belongings at an area dump, and destroyed as much of the physical evidence as possible. The detainees say they gathered the charred remains of the students into plastic bags and threw them into a nearby river.

Those remains were sent to a specialized forensics lab at the University of Innsbruck in Austria which was able to positively identify only one student. Last week, the forensics experts said the rest of the remains were too damaged to yield conclusive results via mitochondrial DNA tests and they are now conducting a more sensitive sequencing test.

Attorney General Jesus Murillo Karam says the confessions coincide with evidence of a large fire in the dump, the presence of ammunition shell casings there and a bag of charred bone fragments and ashes pulled from the San Juan River.

“Without a doubt,” Karam said, “the normalista students were abducted, killed, incinerated and thrown into the San Juan River in that order. This is the historic truth behind the events.”

Parents of the Ayotizinapa students aren’t so sure.

Parent and spokesperson Felipe de la Cruz said learning that officials closed the investigation through a press conference violated an agreement signed last year by the president that stipulated the parents would receive direct notice of any major developments in the case. He added the parents refuse to accept a version of events based solely on detainee statements and insisted they want scientific proof.

The parents are dubious about detainees’ version of events and the authenticity of other evidence cited by the Attorney General.

So are various independent investigators and forensic experts, including Jorge Antonio Montemayor – a scientist with the National University’s Institute of Physics.

Montemayor testified last week at a congressional forum on the disappearances that the heat needed for a fire to reduce bodies to ashes and destroy DNA requires a closed environment like a crematorium and he is sure it could not occur in an open air dump.

“A simple physics analysis that any one of my students could have done, any one of the chemical engineers, biologists, military engineers could have done, but didn’t,” Montemayor said. “The technicians I know who work under the attorney general are not imbeciles. They are well-trained. Why didn’t they do [these studies]? Because they obey orders from above. They’re scared. Of getting fired? No! They’re scared of getting killed.”

Montemayor added that he has received multiple threats since coming forward to counter the official explanation, and called for international investigators less susceptible to threats against themselves and their families.

The students’ families also say that authorities locked in early on the detainee story, and have failed to investigate another working theory about the disappearances that involves soldiers at Iguala’s military base.

So far the only authorities charged in the case are police from Iguala and Cocula, as well as the former mayor of Iguala. None, however, are facing charges of “enforced disappearance,” a crime under international law which would explicitly recognize the role of government actors in the crime.

Attorney Vidulfo Rosales, who represents the students’ families, says the Ayotzinapa case is emblematic of a larger problem.

“The case of Ayotzinapa is not atypical,” Rosales explains, “but rather is indicative of a situation that has become widespread in the country. It’s not the only case from Iguala which shows collusion between municipal or state authorities and organized crime. Through the country this is now common just as enforced disappearances perpetrated by authorities working with organized crime is also common.”

Rosales points out that the official closing of the case comes just days before a United Nations committee is due to examine enforced disappearances in Mexico. Human rights investigators with the Organization of American States are also due to arrive in early February as part of an inquiry into the Ayotzinapa case.