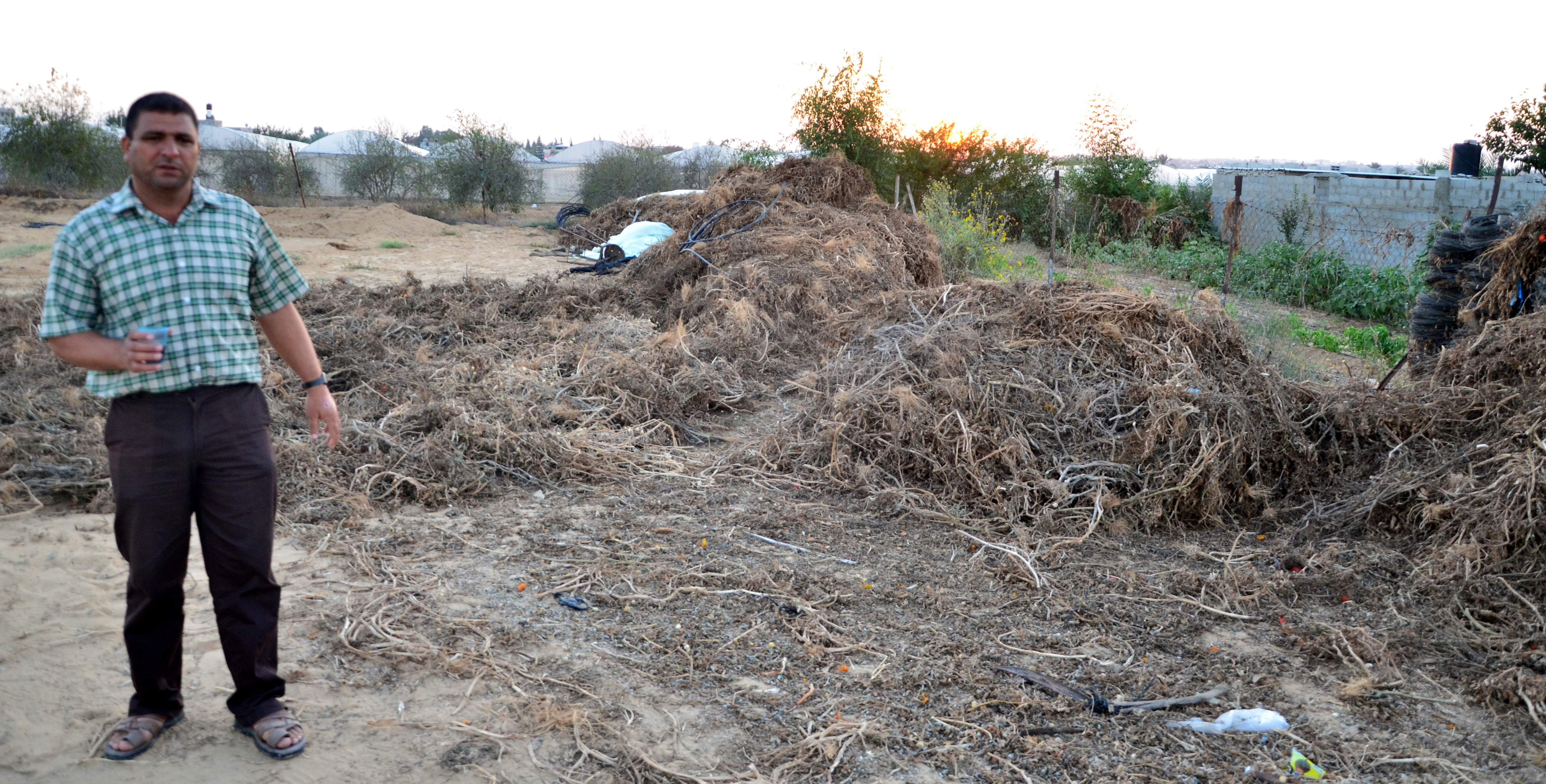 It’s been four months since Israeli troops withdrew from Gaza following a weeks-long military offensive on the coastal territory. Tens of thousands of people remain in temporary housing, more than 30,000 in UN shelters. According to the Agriculture Ministry in Gaza, the territory’s farm sector still reels from the scars of the war as well, with thousands of acres of farmland either partially or completely destroyed.

Now, it’s time for local farmers to harvest and press olives. FSRN’s Rami Almeghari looks at how the damage wrought on fields by troops and tanks during the summer offensive is affecting harvests this fall.

Yousef Alserhy waits his turn at one of the largest olive processing facilities in the Gaza Strip where he expects to press about 25 gallons of oil from two tons of olives.

His family has harvested olives and produced olive oil for decades on their 1-acre olive farm. But their main orchard, located on the eastern border of the Gaza Strip, was completely destroyed during the last war when Israeli tanks and bulldozers flattened the farm land.

Alserhy and his five brothers now depend on a second, much smaller olive farm inside the Gaza city limits.

“Our farmland in the Johr Eldiek area, was first acquired by my great-grandfather,” explains Alserhy. “During the Israeli war of 2008, hundreds of our olive trees were devastated. We replanted the trees, and cared for them until they matured and turned fruitful. During this summer’s Israeli war, tanks and rocket fire completely destroyed the farm again.”

According to Gaza’s agriculture ministry, the region’s farming sector lost an estimated $5 million due to the 51-day Israeli offensive against the territory. Olives are one of the main crops here, but production has dropped by 25 percent.

Tomatoes are another important crop in Gaza.

Longtime vegetable farmer Riyad Madi estimates he lost 250 tons of ripe tomatoes during the war when Israeli troops moved through his fields in the rural Fokharry area, south of the Gaza Strip.

“All the laborers, including my nephews, had fled the farm land during the war.” Madi recalls. “This is something that we have never experienced”

When the tanks rolled into his farm land, all the tomatoes were destroyed.

Since the offensive ended in late August, the prices of many vegetables, including tomatoes, have doubled. Here at the market place of the Alshat’ refugee camp, local residents buy fewer vegetables then they used to.

35-year-old Um Mohammad from the Beach Refugee camp is a mother, with eight children to feed.

“I managed to buy only four pounds of tomatoes and this amount is surely inadequate, even for one meal,” she says. “What can I say? May Allah, God, help us. At least we thank God that this land seems to blessed and that we can find some vegetables to buy.”

“Throughout our observation and accounting of the damages to farm lands in various regions of Gaza, we found that hundreds of acres of olive trees were destroyed completely,” he explains, adding that even those crops still standing after the tanks rolled out often produce a lower yield. “Hundreds more of citrus fruit were partially damaged because of a lack of irrigation. We also found that lower levels of irrigation and fertilization during the war caused the weight of olives and other fruits to be much lower than in previous years.”

Local officials say that this summer’s war was the largest and most devastating for Gaza since 2006. The Housing and Public Works ministry in Gaza, says that 30,000 residences were either completely or partially destroyed. More than 2000 Palestinian men, women and children died. Israeli officials say that 66 Israeli soldiers and one Israeli child were killed during the same time period.