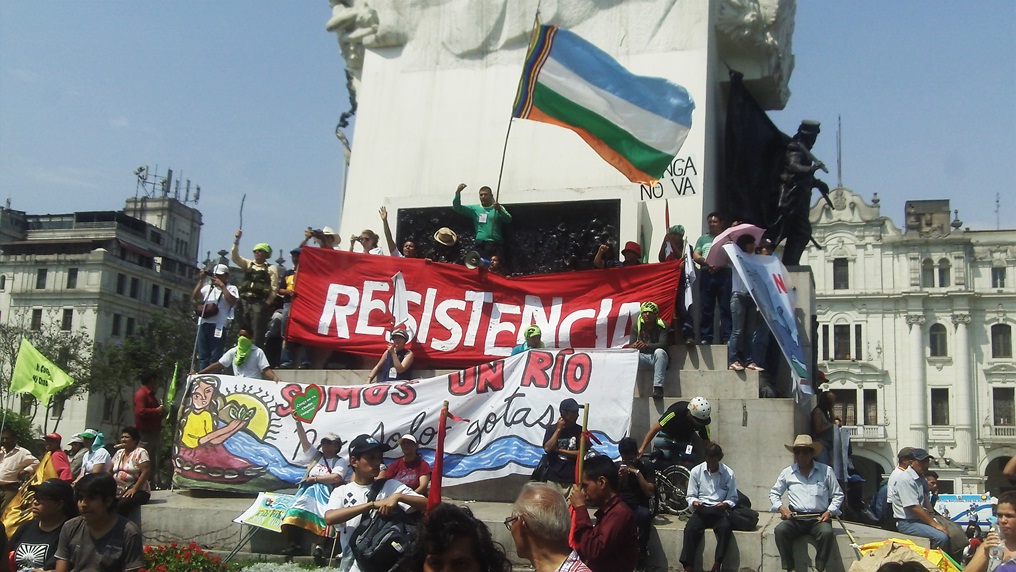 United Nations climate talks in Lima, Peru wrap up Friday with a plan to continue negotiations on a global climate treaty next year in Paris. As the high-level COP20 talks played out behind closed doors, thousands took to the streets to call for meaningful action. Among those who traveled to Lima for the alternative People’s Summit Against Climate change were members of indigenous communities who have become frontline defenders of strategic areas like the Amazon Basin – oftentimes at great personal risk. Aldo Orellana reports from Lima.

While the United Nations summit drew world leaders to conference rooms, a parallel event drew thousands of Peruvians to the streets of Lima to demand real action on the environment. Participants in the alternative summit questioned policies of the Peruvian government that have created an investment-friendly climate for industries that extract natural resources from environmentally-sensitive areas, often at the expense of local indigenous communities.

Speaking in her native Asháninka  language, Lita Rojas Pinedo says he is still reeling from the murder of her husband, a community leader who defended the rainforest against illegal loggers. Her husband, Leoncio Quintisima, was one of four indigenous leaders murdered in September in the Alto Tamaya-Saweto community of Peru’s Amazon region near the border with Brazil. Internationally-recognized environmentalist Edwin Chota was killed in the same massacre.

Mar Pérez of Peru’s Human Rights Coordinating Council says authorities knew of the threats made against community leaders by illegal loggers, but did nothing to prevent the violence. “On various occasions, leaders filed reports with police and federal officials but authorities didn’t lift a finger and the reports were just archived because no resources were alloted to allow investigators to travel to the region,” notes Perez. “In other words, the government had no interest in following up on the case or in protecting indigenous people in the country.”

Illegal logging in the Amazon is not isolated to Peru, nor is violence against local indigenous leaders.

Last month, Jose Isidro Tendetza, an Ashuar leader from Ecuador’s Amazon region went missing. His body was found December 2nd, bound with rope along the banks of the Zamora River. Tendetza was a high-profile opponent of a regional mining project and had plans to attend the People’s Summit Against Climate Change in Lima.

The Confederation of Indigenous Nationalities of Ecuador – the CONAIE – wants an international team to investigate Tendetza’s death. The organization says at least two other well-known indigenous environmentalists have been murdered in recent years in the Amazon Basin of Ecuador.

Once considered too isolated for development projects, countries with Amazon regions have since opened up sections of the rainforest for oil and gas exploration, mining and logging. Local indigenous communities generally oppose extractive industries, because of environmental effects on the land they rely on for their sustenance and livelihood.

Reyder Sebastían Quinticuari, president of a Peruvian association of  Asháninka communities, says the government’s refusal to title indigenous land claims enables extractive industries to encroach upon indigenous territories and fuels conflict. “We’ve been requesting formal land titles for many years now, but the government has no political will to grant them because there are a lot of exploitable resources there,” Quinticuari told FSRN. “Even some officials within the regional government own extraction licenses there, and they aren’t going to act against their own interests. We’re practically fighting against the state itself when it’s the state that should be backing us. This is why we say – and we won’t get tired of saying – that all of this is happening with the complicity of the government.”

A recent report by the international organization Global Witness ranked Peru as the fourth most dangerous country in the world for environmental activists, behind Brazil, Honduras and the Philippines. According to the report, at least 57 land and environmental defenders have been killed in Peru in the last twelve years. In that time, deforestation rates within the country’s Amazon basin have reached historic highs.

At Wednesday’s March for Mother Earth, Lourdes Huanca, leader of a Peruvian organization of indigenous small farmers, accused the government of placing the interests of international investors over the lives of front-line environmental defenders. “By favoring corporations, the government has been criminalizing social protests. We have women – widows – who have been criminalized,” said Huanca. “We have the dead on our side and this we don’t forget. While the government hosts a UN summit on the environment, with all those presidents and their false solutions, we’re present here as the original people of this land. We’re here with the city and the countryside united.”

Peru and Brazil, the two countries in the world with the most extensive rainforests, are now the deadliest for forest defenders. And in recent years, Ecuador has developed a pro-mining strategy that favors extractive industries in environmentally-sensitive areas.

While the indigenous communities of Amazon Basin countries were largely shut out of the official talks in Lima, they made their voices heard in the streets and will continue to protect their ancestral territories.