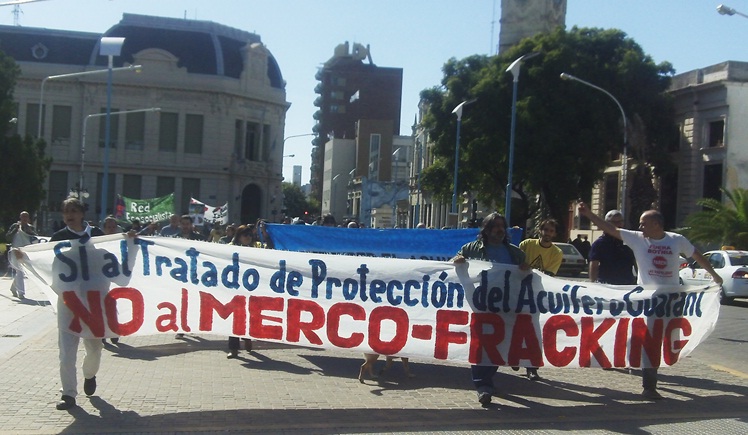 Argentina is attracting the attention of energy companies that want to bring fracking to Latin America. But the expansion of this gas extraction technique is meeting resistance in what was once a prime destination for foreign investment. Aldo Orellana reports from Entre Ríos, Argentina.

The U.S. Energy Information Agency estimates Argentina has the world’s second largest reserves of shale gas and the fourth largest reserves of shale oil. Much of those reserves are in formations in the country’s Neuquén province. Energy experts predict they could cover Argentina’s oil and gas demands and have product left over to export. Ninety percent of Argentina’s energy comes from oil and gas and the country currently imports fossil fuels to meet its energy needs.

Energy Analyst Hernán Scandizzo of the NGO Observatorio Petroleo Sur says the government of Argentina crafted a strategic plan around the development of these reserves, but lacks domestic technology and experience when it comes to fracking. In 2013, the government passed energy regulations aimed at attracting companies willing to invest more than $1 billion in shale development projects. Scandizzo says that was enough for Chevron to sign a 35-year deal to invest around $16 billion in the Vaca Muerta shale formation in the Neuquén province.

“The day after this regulatory framework took effect,” he explains, “Chevron signed the deal. So what they’re trying to do is send messages to foreign markets so that transnational firms come to the country.”

Last October, Argentina’s government passed a new law that extends hydrocarbons concessions to periods of 45 years – up from 35 – with the possibility of renewal.

The red carpet treatment for foreign energy companies has met resistance in various parts of Argentina.

Authorities in around 50 municipalities have enacted local fracking bans in response to public pressure. This has, in turn, created a power struggle between national and local officials over what steps communities can take to prevent energy projects.

“We want to have the right to protect our water from pollution, to keep living in our hometowns,” says Ignacio Zabaleta with the Assembly of Fracking-Free Territories, a network of groups opposed to the extraction technique. “It’s a response to the sidelining of the will of the people. It’s about people who have lived in certain areas for centuries being displaced for the benefit of two or three corporations and for the benefit of corrupt and immoral officials.”

Most of the municipalities that have rejected fracking are in the province of Entre Rios, home to part of the Guaraní Aquifer — one of the world’s largest underground bodies of freshwater. The aquifer spans the borders of Argentina, Brazil, Uruguay and Paraguay.

Provincial legislator Emma Bargagna says it’s important to treat the aquifer as a common wealth in the public domain, not as a commodity governed by the logic of the market.

Anti-fracking activists in Argentina also worry about operations in neighboring countries that share the aquifer.

Horacio de Carl is one of five activists who was arrested last year for blocking trucks carrying shale exploration equipment from Argentina to Uruguay.

“Vaca Muerta is where it all starts,” De Carl says while the case has been difficult, indigenous Mapuche environmentalists in the Vaca Muerta region of Neuquén are facing a much harder fight. “They’re clearing the area via an intense criminalization campaign targeting the Mapuche people and the community of Neuquén. What they hope to achieve through this criminalization is to demobilize us. They want us to give up on what we’re committed to, to give up on our struggle, our fight to defend our natural common wealth.”

An indigenous Mapuche woman from Neuquén named Relmu Ñamku is facing aggravated attempted murder charges under Argentina’s anti-terrorism law for allegedly throwing rocks during a police operation to remove residents from an area where the US-based Apache corporation wants to expand its activities.

Mapuche communities argue they were not consulted about proposed energy projects on their land, in violation of international accords. Non-indigenous communities in Argentina also want a say about projects that could affect the environmental integrity of their land and water.

As a first step, they want the government to implement energy policies that favor renewables over the expansion of fossil fuel extraction projects.