Rise Up October keeps pressure for justice reform in the streets 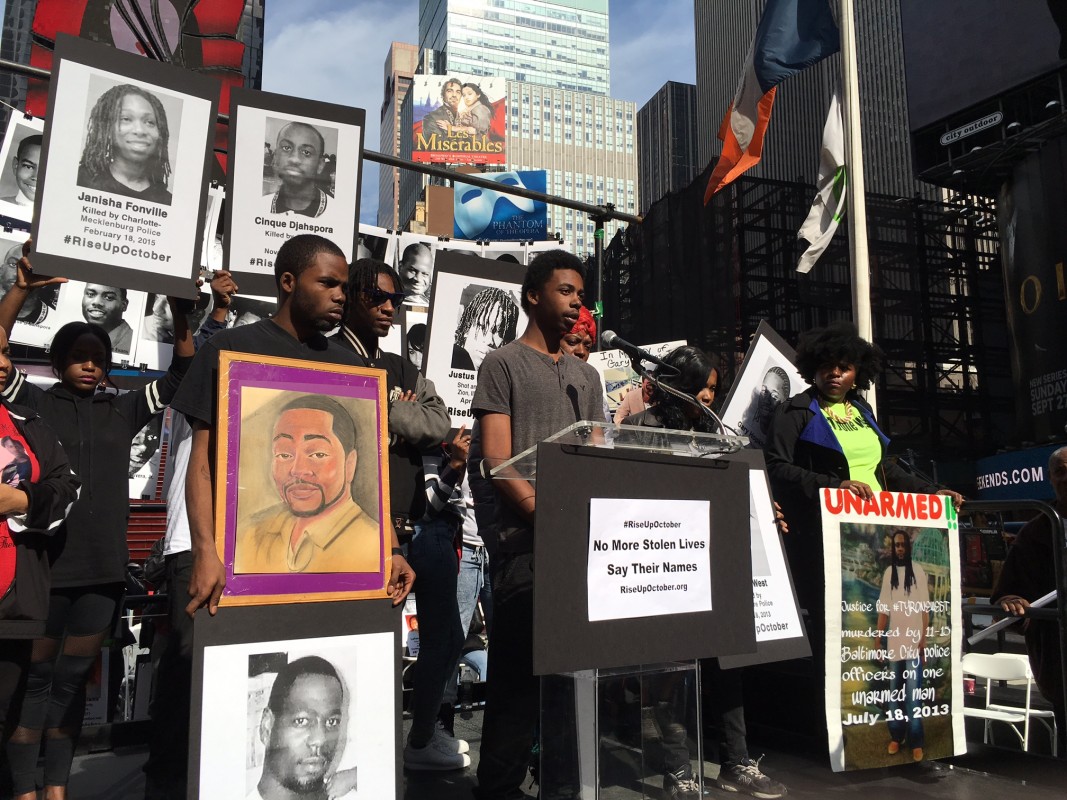 A nationwide group of law enforcement officials issued a call this week to slash the enormous prison population in the United States. The coalition, Law Enforcement Leaders to Reduce Crime and Incarceration, includes 130 top police officials, prosecutors and attorneys general from every state in the country. They say that the U.S. imprisons 25 percent of all the people jailed worldwide, despite being home to only five percent of the global population, and note that more than half of those jailed have diagnosed mental illnesses or substance addictions. They’re calling for specific measures to substantially decrease arrest rates, unnecessary prosecutions and excessive sentences including mental health alternatives, reclassifying crimes and reforming mandatory minimums.

As members of the group met with President Barack Obama Thursday, New York City was hosting a three-day series of events, forums and street protests dubbed Rise Up October.  On Friday, a demonstration at the Queens entrance to New York’s infamous Riker’s Island  called for closure of the massive jail. The action was part of what organizers call a collective push back against police violence targeting communities of color.  Linda Perry Barr reports.

Preston Roundtree, a young black man from New York City, helped kick off Rise Up October at a rally in Times Square on Thursday.

A 2015 analysis by the Washington Post found that out of thousands of fatal shootings at the hands of police in the past decade, only 54 officers have been charged. And most of those were cleared or acquitted. The disparity in the justice system is one of the reasons victims’ families continue to speak out.

Film director Quentin Tarantino and actress Gina Belafonte were among those at Thursday’s rally who read out a list of names of people who had lost their lives at the hands of law enforcement. The two stood on a podium surrounded by the glowing lights of Broadway. The microphone was passed to relatives of people killed by police.

Justin Howell’s mother told rally-goers her son was killed while running away from police in Illinois. “We have a problem when we live in a nation that says that it’s not OK to flee for your life, but it is OK to gun someone down in fear for your life,“ she said.

Below the stage was an orange, black and white banner that read “Rise Up October – Which side are you on? – No More Stolen Lives – #SayTheirNames.

Conner from Long Island was walking through Times Square during the rally: “What this really does is it makes people hate the cops and it creates a separation. And what that does is it makes cops fear their own lives and this is basically fueling the fire.”

The Rise Up October events are also drawing attention to law enforcement issues that disproportionately affect communities of color, like mass incarceration and racial profiling.

Sixteen-year-old Amir Johnson says that contrary to what some city officials have said, the controversial Stop and Frisk program is still active in his neighborhood in Jamaica Queens. “They always wanna search me just because I’m black and I live in the hood,” Johnson told FSRN. “That’s messed up.”

It’s been more than a year after protests in Ferguson rippled across the U.S. gatherings like Rise Up October aim to keep the pressure on officials to pass meaningful reforms and show the nationwide movement for police reform isn’t leaving the streets any time soon.