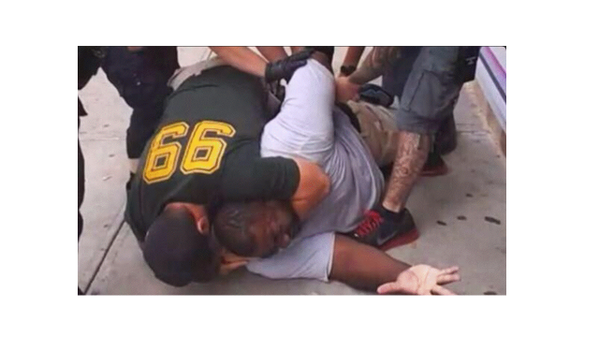 Protests grew Thursday night in dozens of U.S. cities, from coast to coast and border to border, after a Staten Island grand jury returned no indictments against NYPD officer Daniel Pantaleo for his role in the July 17th death of Eric Garner. Cell phone footage showed Pantaleo place Garner in a choke hold, then wrestle him to the ground and pin him in place while other officers handcuffed him. Garner, who suffered from asthma, said eleven times that he couldn’t breathe. The police had approached Garner for allegedly selling loose, untaxed cigarettes. The NYPD 2013 Patrolman’s Guide bans the use of choke holds. The medical examiner who conducted the autopsy of Garner’s body ruled the death a homicide.

The largest demonstrations occurred in New York City, where thousands flooded the streets for several hours for a second consecutive night. Police arrested more than 200 demonstrators. Major thoroughfares were shut down in Minneapolis and Chicago, Dallas and D.C., subways and train stations filled in Boston and Oakland.
The Ferguson chant of “Hands up, don’t shoot” has morphed into “I can’t breathe” on the streets of New York and elsewhere around the country.

The Staten Island grand jury’s “no bill” decision comes less than two weeks after a St. Louis County, Missourri grand jury opted not to indict Ferguson police officer Darren Wilson for the shooting death of Michael Brown. In both cases, the officers are white and those killed were black and unarmed.

NY Congressman Charles Rangel called for the full disclosure of the grand jury’s proceedings as was done in St. Louis. But a request to release records filed by the district attorney in the Garner case specifically excludes transcripts of testimony and exhibits.

Attorney General Eric Holder announced Wednesday evening that the Justice Department will proceed with a federal civil rights investigation into Garner’s death.
A federal probe is ongoing in the Michael Brown case as well.

Earlier this week Holder was in Atlanta, Georgia to kick off a series of regional town hall meetings on the issue of restoring community trust in police agencies.
Holder’s remarks in the Ebenezer Baptist church – where Reverend Dr. Martin Luther King Jr. once preached – were met with applause, but so were many rousing speeches from community leaders and local residents.

Among them, Atlanta spoken word artist and activist Aurielle Lucier.

In Phoenix, Arizona protests took a local turn after a fatal shooting there of an unarmed black man by a white police officer on Tuesday. The investigation falls under the Maricopa County Attorney’s office, where the district attorney is not required by law to present the case to a grand jury.

And in related news, Attorney General Holder announced Thursday that a probe of the Cleveland, Ohio Division of police found a systemic pattern of the use of unreasonable force — including lethal force. Last month a white officer there shot and killed 12-year-old Tamir Rice as he played with a toy gun in a park.