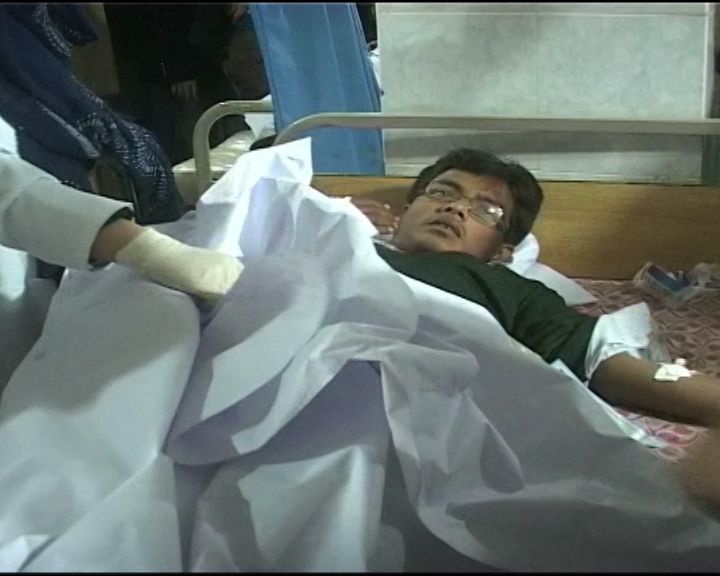 Student injured in the attack on a school in Peshawar, Pakistan on Dec. 16, 2014. (Photo credit: Gabe Matthews)

Taliban militants killed almost 150 children today in a morning attack on a military-run school in Peshawar. More than 120 others were injured, and the death toll may yet rise. Peshawar is just under 40 miles from Pakistan-Afghan border and situated at the edge of the Federally Administrated Tribal Area, where Pakistan’s armed forces are waging an offensive against the militant group. FSRN’s Lewis Reining reads for Gabe Mathews, who was at the scene of the attack.

Hundreds of people quickly gathered near the Army Public School in Peshawar on Tuesday morning. Most of them had loved ones inside the school, and the Army was still searching for the militants who launched the brutal attack.

27-year-old Rehan Khan was waiting for his nephew, an 8th-grader at the school. He began weeping when he saw the ambulances rushing by.

“I pray to Allah to save my nephew,” Khan said. “It is not humane to attack schools and kill children. We are innocent and I don’t know why the militants kill us. I don’t consider them Muslims. I will never again send any of my family members to good schools if I can just find my nephew alive.”

Pakistani troops and police cordoned off the area and beefed up security soon after the eight-hour long siege began.

Wearing suicide vests, at least nine militants had entered the military-run school and opened fire, killing both male and female students ranging in age from nine to 19-years-old. A handful of educators and staff were also among the dead. Another 120 people were injured.

The Taliban quickly claimed responsibility for the massacre, saying the attack was in retaliation for the ongoing military offensive against them in the nearby Federally Administered Tribal Areas (FATA). Most of the students at the school are from Pakistani military families.

One student who witnessed the entire scene did not want to give his name for security reasons.

Speaking to reporters just after the siege ended, he said he hid behind a classroom during the attack. After about an hour army personnel rescued him. He said that while none of the terrorists came inside the classroom, they killed students just outside the room. He recalled seeing six or seven terrorists who’d been shot. While unsure if they were still alive, he was sure that they were armed with large guns.

Zahir Shah is a doctor at the nearby Lady Reading Hospital where most of the injured and dead bodies were taken.

“We received most of the students who were injured or killed with bullets,” Dr. Shah said. “Most of the students were shot in head and chest three or four times. All of our doctors have closed their private clinics to come and perform duties in the hospital and we declared a state of emergency in our hospital soon after we found out about the incident.”

Following the attack, Taliban spokesperson Muhammad Umar Khorasani said that the Army school was targeted because “the government is targeting our families and females.” Today’s massacre exceeded the regular brutality meted out by the Taliban, and Khorsani threatened more such attacks in the future.

According to Muslim custom many families, still reeling from the attacks, buried their dead children Tuesday evening. More funerals are set for Wednesday morning.