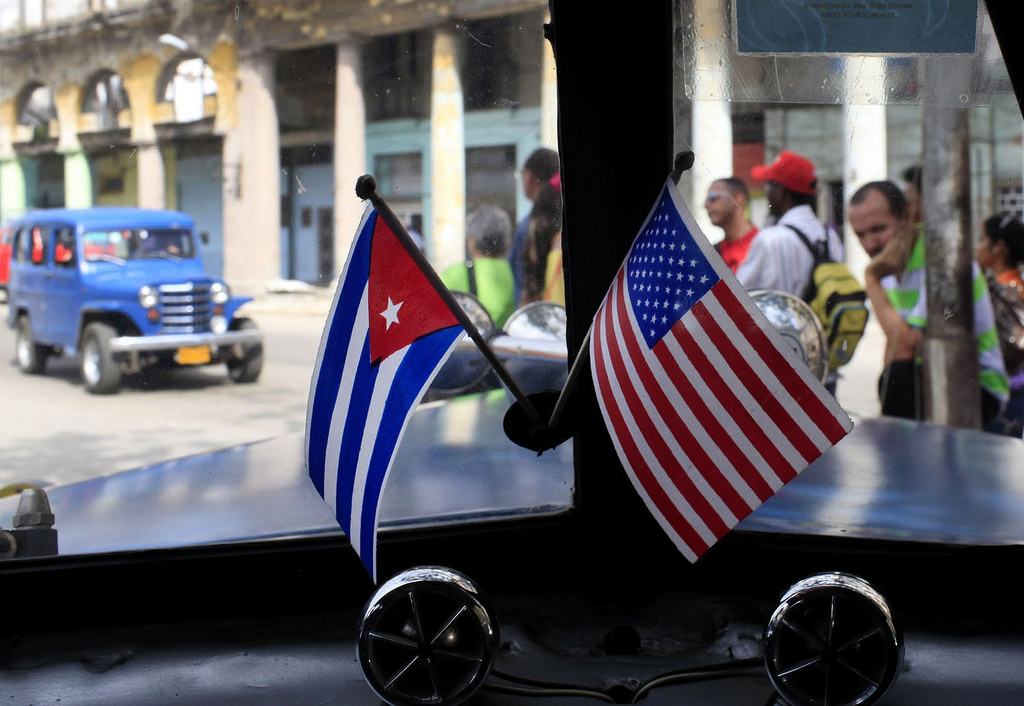 The U.S. and Cuba announced a thawing of bilateral relations for the first time in over fifty years. Nell Abram has more from Tampa.

[sdonations]8[/sdonations]
President Barack Obama and Cuban leader Raul Castro announced the details of their landmark talks in simultaneously televised speeches. The U.S. will reopen diplomatic relations and its embassy in Havana for the first time since 1961, loosen a number of financial and trade restrictions and reassess Cuba’s status as a state-sponsor of terrorism.

“I do not believe we can keep doing the same thing for over 5 decades and expect a different result,” said Obama. “Moreover, it does not serve America’s interests, or the Cuban people, to try to push Cuba towards collapse. Even if that worked, and it hasn’t for 50 years, we know from hard earned experience that countries are more likely to enjoy lasting transformation if their people are not subjected to chaos. We are calling on Cuba to unleash the potential of 11 million Cubans by ending unnecessary restrictions on their political, social and economic act. In that spirit we should not allow U.S sanctions to add to the burden of Cuban citizens that we seek to help.”

Cuba freed Alan Gross, a USAID contractor jailed in Cuba in 2009, who said today that the people of Cuba are in no way responsible for his ordeal. “It pains me to see them treated so unjustly as a consequence of two governments’ mutually belligerent policies,” Gross commented. “Five and a half decades of history show us that such belligerence inhibits better judgments. Two wrongs never make a right. I truly hope we can get beyond these mutually belligerent policies. And I was particularly happy to hear what the President had to say today.”

Cuban authorities say that Gross’s release was granted on humanitarian grounds. A prisoner swap was also part of the deal. The U.S. released the last three of the “Cuban Five” intelligence agents and Cuba returned an unnamed U.S. spy who had been jailed for twenty years. Cuba also agreed to free more than 50 prisoners at the request of the U.S.

In his speech, Cuban President Raul Castro said President Obama’s decision deserves respect and recognition from the Cuban people. He also thanked Pope Francis for his support, as well as the Canadian government for help facilitating the high-level talks. “This does not mean that the main issue has been resolved,” said Castro. “The economic, commercial and financial blockade – which causes enormous damage to the people and economy of our country – needs to end. Although the measure of the blockade has been written into law, the president of the United States can modify the way in which it is applied via his executive power.”

President Obama was clear that his actions today do not lift the long-standing economic embargo on Cuba, but indicated he wants Congress to take up the matter. “The embargo that’s been imposed for decades is now codified in legislation,” he stated in his televised speech. “As these changes unfold, I look forward to engaging Congress in an honest and serious debate about lifting the embargo.”

Congress is in the final days of its lame duck session. When the new session of Congress opens in January, Republicans will hold a majority in both houses. Professor Jaime Suchlicki, Director of the Cuba Institute at the University of Miami, says the president isn’t likely to see much support from the GOP for lifting the embargo. “The Republican majority is incensed,” Suchlicki told FSRN. “They are going to be screaming and carrying on all the way to January and they will do whatever they have to do to prevent them from doing anything else.”

The deal has also raised questions about the fate of Assata Shakur, a former Black Panther who was convicted in the U.S. for the shooting death of a New Jersey police officer. Shakur, whose legal name is Joanne Chesimard, escaped from prison in 1979 and later received political asylum in Cuba. Last year, the U.S. Justice Department added Shakur to the top of the FBI’s “Most Wanted Terrorists,” she’s the first women ever named to the list. The FBI’s offer of one-million dollars for her capture remains on the bureau’s website.