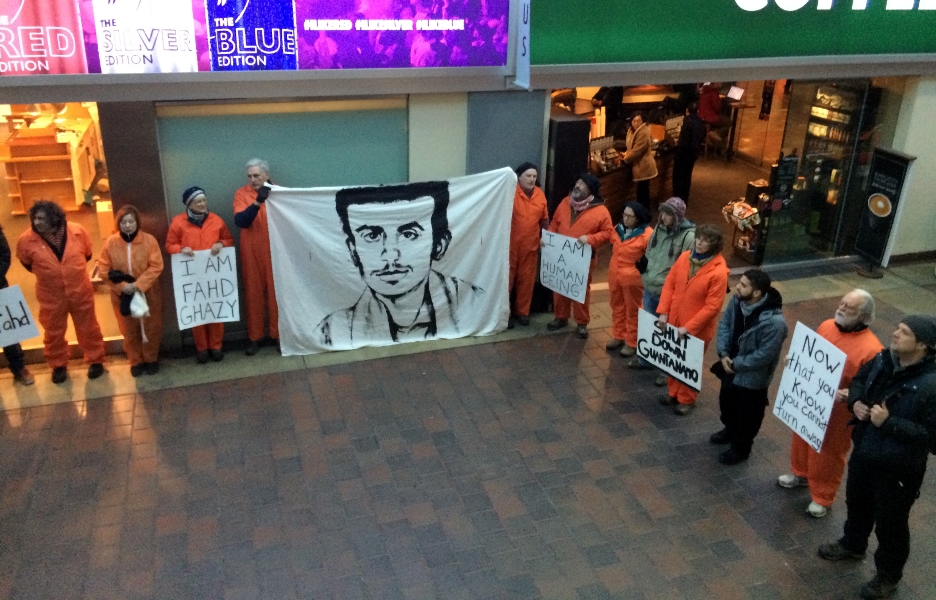 This week marks the 13th anniversary of the opening of the Guantanamo Bay detention center. Witness Against Torture, an advocacy group calling for the prison’s closure, is holding a week of actions in Washington D.C. With a seven-day fast and public demonstrations all over the city, they hope to keep public pressure on lawmakers in the wake of a Senate report detailing torture methods used against detainees. Ashley Westerman reports from Washington D.C.

Inside Washington D.C.’s Union Station protesters, some dressed in orange prison jumpsuits and others with black hoods covering their faces, sing sorrowfully.

The activists are with Witness Against Torture and have come to the nation’s capital to fast in solidarity with the inmates of Guantanamo Bay and call for the prison to be closed. As they march through the vast transportation terminal, the group also stops periodically to tell the story of 30-year-old Fahad Ghazy, a man who has been imprisoned at Guantanamo since he was 17. Even though he was cleared for release in 2007, Ghazy remains in prison.

“He’s a Yemani, he has a wife and a daughter,” explains Martha Hennessey of Vermont. “The daughter was two-months-old when he left. And so Fahad is someone who is helping us to recognize his humanity and to reclaim our own humanity as we are complicit. We are a part of the problem of Guantanamo.”

After the demonstration, the group headed back to First Trinity Lutheran Church where 35 of them are sleeping in the basement. Organizers say dozens more are fasting around the country. Their last meal was Monday night.

The hunger strike, they say, isn’t just in solidarity with hunger strikers imprisoned in Guantanamo. They’re also calling for the public to hold their lawmakers accountable.

The questions of “Who is accountable?” and “Who is responsible?” have been floating around a lot since the December release of what is now known as the CIA’s torture report. The voluminous report released by the Senate Intelligence Committee details five-and-half years of the CIA’s overseas detention and interrogation program, including evidence of torture. Yet no one has been prosecuted and the talk of reform has tapered off.

Katherine Hawkins is the national security fellow at OpenTheGovernment.org. She says the first step to accountability is to find out why the evidence of torture in the CIA report failed to result in action. Civil rights groups, such as Human Rights Watch and the ACLU, have called for investigators to reopen the probe but the Department of Justice isn’t budging.

In the meantime, Hawkins says other mechanisms could be put in place to at least ensure accountability moving forward. These could include bolstering the criminal definition of “torture” as well as enacting President Obama’s 2009 executive order to end the program.

Outgoing Senate Intelligence Committee Chairwoman Dianne Feinstein is readying legislation that would do just that. Her plans, which were outlined Monday in a letter to the President, would limit interrogation techniques used by CIA officials and ban long-term detention of detainees.

Hawkins suspects Feinstein has concluded and accepted that no one will be prosecuted “and thinks, ‘Well, we should at least strengthen the law so that, say there’s another terror attack 10 years from now under a different president, we can’t go back there.’” Hawkins also says limiting what the CIA can classify and ensuring ongoing public disclosure of what’s happening to detainees as well as better media coverage may also foster change.

Back at the First Trinity Lutheran Church, Witness Against Torture organizer Matt Daloisio says the combination of a Republican-led Congress and a Democratic President doesn’t spark much optimism for compromise in the coming year. But he says they’re hopeful President Obama will at least keep his campaign promise to close the prison.

“And it’s something he has maintained that he wanted to do but has not done, has failed,” noted Daloisio. “So we are optimistic or maybe if not optimistic, hopeful that President Obama will close the prison before his term is up.”

The fasting and demonstrations continue into the weekend. Several other social justice groups are expected to join a culminating rally Sunday in front of the White House, followed by a demonstration on Monday.