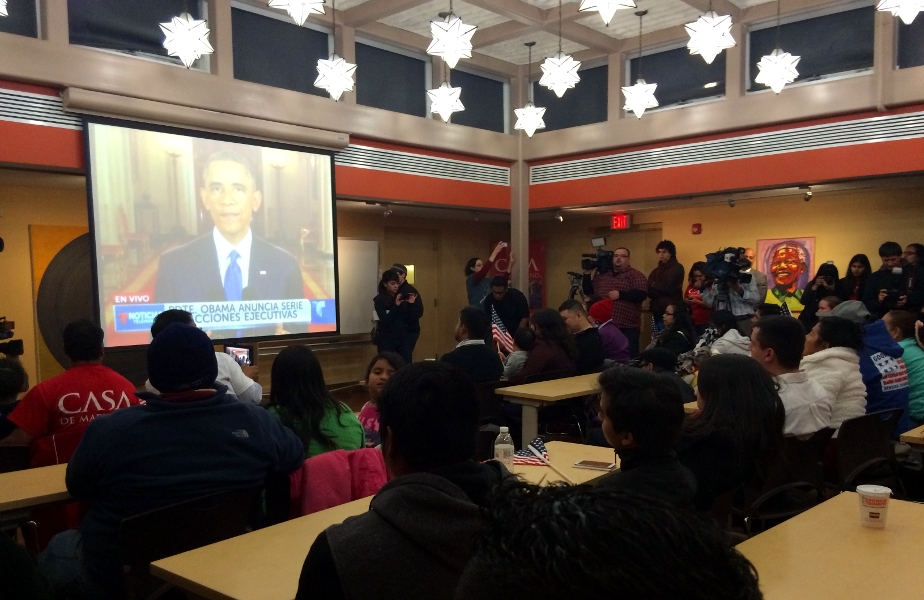 President Barack Obama announced several executive orders Thursday evening to fix what he calls, “a broken immigration system.” Addressing the nation from the White House, Obama laid out a sweeping plan that will ease fears of deportation for about 5 million undocumented immigrants and grant work permits.

The announcement comes after years of record-high deportations and pressure from immigrant rights advocates. Across the country, immigrant advocacy organizations held “watch party” events during the speech.

FSRN’s Ashley Westerman attended a watch party hosted by CASA de Maryland in Hyattsville, Maryland – a suburb of Washington D.C. While there she spoke with attendees about their reactions to the President’s announcement.

Marcela Campos of Silver Spring, Maryland: “It’s a great opportunity for all the people that we have children that are U.S.A citizens or residents. We can get out from the shadows. We can feel free. We can do more for the community that we’re going to have legal status of the country. I am undocumented and I have my son here so anytime that I going out, I’m afraid to be deported, I’m afraid to get by police and they report to immigration about my status.”

Gustavo Andrade, CASA de Maryland Director of Community Organizing: “So, we’re incredibly happy this evening. There’s a lot of joy in my heart and the hearts of millions of people tonight because this speech is really a validation of many, many people’s efforts over many years. I’m thinking of all of those who marched and organized and risked and sacrificed to make this happen. He said ‘no’ for six years, but after six years but after six years, tonight he said ‘yes.’”

Dilma Serrano of Washington, D.C.: “So, I’m very happy, first of all, that this happened. I’m very happy. It’s such an important step, it’s going to mean a lot of benefit to the community but I also feel for those who didn’t qualify. I can think of people, maybe, who came when they were 17 and have been working very hard since they’ve been here. But for those people, for everybody else, this is something that we’re going to keep fighting for so we need to come together, we need to rise up and continue fighting. This is not over. And, so, I’m very happy I qualified and I believe in President Obama. We still have hope and we still have faith in President Obama that he will continue to do the right thing. I think he can do something for everybody else, he has a heart. He can continue and continue to open doors for us, that is my hope.”

Marcie Morales, Maryland State Delegate Elect, District 19-Montgomery County: “So tonight is a night of celebration. Five million of our sisters and brothers in our community will benefit from the expansion of eligibility for deferred action status. It also benefit parents, undocumented parents of U.S.-born children. While these are great benefits to our community, we obviously have other needs and we have other folks that will not fit within those categories. However, the Executive Order cannot create new law, it can only expand existing law. For that reason, President Obama is taking this action so that there aren’t any legal repercussions, accusations of abuse of power or any anti-Constitutional new norms. With that said, it’s a night of celebration, like I said in the beginning. It’s a person joy for me. I am Peruvian American, I was born in Arlington, Virginia, been living in the D.C. Metropolitan area my whole life so I know that a lot of our communities will benefit from this.”

Ricardo Campos of Silver Spring, Maryland: “The President’s speech was great. I think that this is just a step forward. Obviously, a couple of millions will benefit from this but there is so much more to do. Many of our parents would not benefit from this action, but I feel really grateful. My sister will be able to qualify for a work permit and she will be able to be here with her baby. We will be able to wake up every morning without the fear of knowing that my sister could be just deported, and I would end up here with the baby, with my nephew. And just thinking about that we could be separated is terrifying. And tomorrow we can wake up and smile and know that I can drive to work and that my sister will stay home with her baby and that she won’t be separated. That I will go back home and I will see them there. I will go back home and she will still be there with her baby without fearing separation and deportation.”