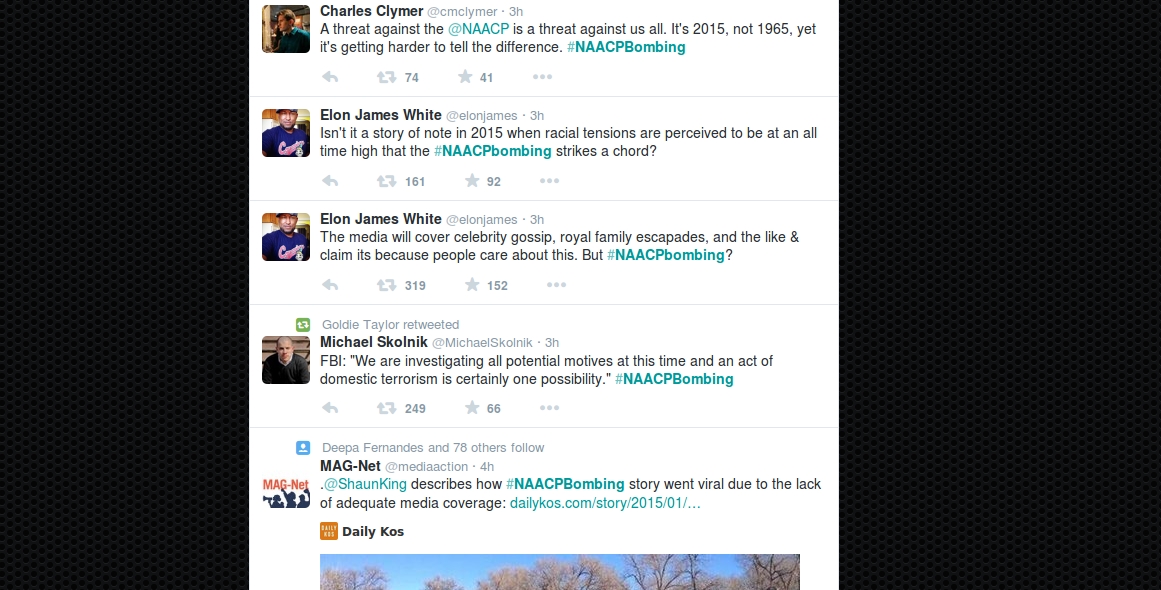 Screenshot of the #NAACPbombing hashtag on January 7, 2015.

The FBI states that around 10:45 a.m. Tuesday morning an improvised explosive device, made from a road flare and a can of gasoline, charred the exterior wall of a building that houses the Colorado Springs branch of the NAACP. The gas can failed to ignite but the explosion did knock items off the walls inside. No one was injured.

Neighbors startled by the sound of the blast say they witnessed a Caucasian man in his 40s fleeing the scene in a pickup truck.

“We do not know if that explosion or improvised explosive device was intended for the hair salon or the NAACP that is also in the vicinity of that hair salon,” says Amy Sandler, a special agent working for the FBI out of Denver. “This is a joint investigation. We have been working with the Colorado Springs police department and there is other federal and possible state  agencies that are assisting us as well. We do not have information available currently as to the individual that is responsible for this incident.”

The investigation is ongoing. Thus far no one has been arrested and authorities have not decided whether or not to call it a hate crime. The NAACP was the target of multiple attacks during the Civil Rights Era of the 1950s and 60s.

Tuesday’s bombing attempt comes at a time in which an African-American led movement demanding greater police accountability has gained nationwide momentum. Grand jury decisions to not to bring criminal charges against police officers involved in the deaths of Michael Brown and Eric Garner have served as catalysts for what some call a new civil rights movement. Brown and Garner – both African American men – were unarmed at the time of their fatal encounters with police. The national attention generated by the Brown and Garner cases has also put the spotlight on lesser-known incidents of police killings of unarmed black citizens.

President of the Colorado Springs NAACP  Henry Allen Jr. says the attack will not deter his office from continuing their civil rights work. The national office of the NAACP released a brief, four sentence long statement Wednesday indicating the organization “looks forward to a full and thorough investigation into this matter by federal agents and local law enforcement.”