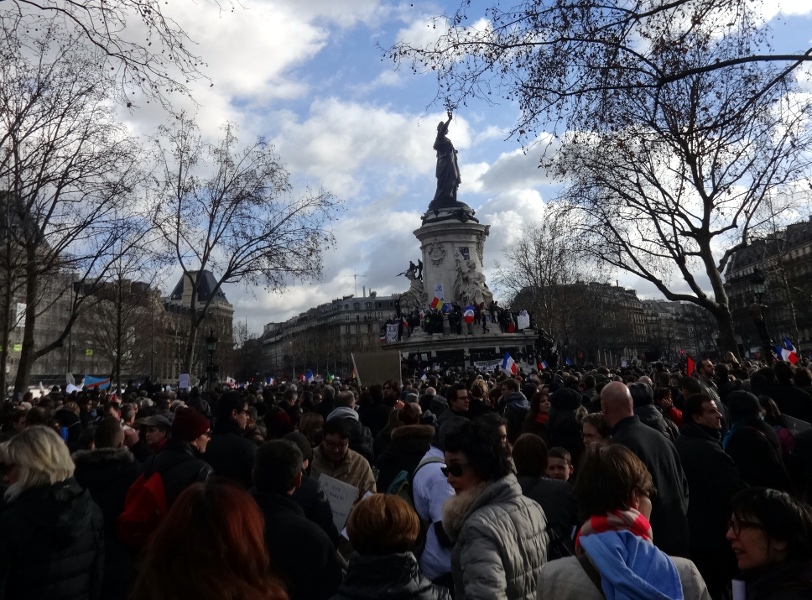 More than 3.5 million people marched throughout France Sunday, with between 1.2 and 1.6 million in Paris. They came out in response to a call for unity by French President Francois Hollande, in defense of France’s republican values after 17 people were killed last week in a three-day killing spree that started with a massacre of 12 people at the headquarters of the satirical magazine Charlie Hebdo. At the front of the Paris gathering were the families of those killed, and dozens of world leaders linking arms. FSRN’s Sarah Elzas was there.

Every street linking the Place de la Republique and the Place de la Nation two miles away was full of people, walking — in silence. Unlike most demonstrations in France, on Sunday there were no chants nor songs. Every once in a while the crowd would break into Applause and occasionally they would sing the national anthem, the Marseillaise.

People had the phrase “Je suis Charlie”, I am Charlie, pinned to their coats or written on posters. The phrase has become the slogan of support for the 12 people killed at the Charlie Hebdo magazine.

For many older people in the crowd, the march brought out a sense of nostalgia for the magazine that embodied the rebelliousness of their youth.

“It was very uh- provocative?” said one woman in the crowd, Corrine. When asked if she liked that provocation, she said “It was fun… I think it’s typical of the French spirit. Sometimes I disagree with their drawings, but still!”

Jacques Perrin was also at the march. “It was a crazy, crazy newspaper, with foolish things,” he said, but added that it didn’t shock him. “No! It was alternative culture, a kind of push against power. I am not a reader today, but I am for this kind of freedom.”

That kind of freedom – press freedom – was one of the reasons for this march. But Paris-based Reporters Without Borders, which defends freedom of the press, said it was “outraged” by the presence at the march of heads of state of countries where “journalists and bloggers are systematically persecuted,” including Egypt, Russia, Turkey and the United Arab Emirates.

The presence of Saudi officials also drew criticism, two days after a blogger was publicly flogged for allegedly insulting Islam during a debate in an online forum. Saudi authorities sentenced the blogger, Raif Badawi, to ten years in prison and weekly lashings for what many say was his leftist criticism of the Saudi regime. His supporter took to social media using the slogan “Je suis Raif” in an attempt to channel some of the outrage generated by the Charlie Hedbo attack towards the protection of free speech beyond French borders.