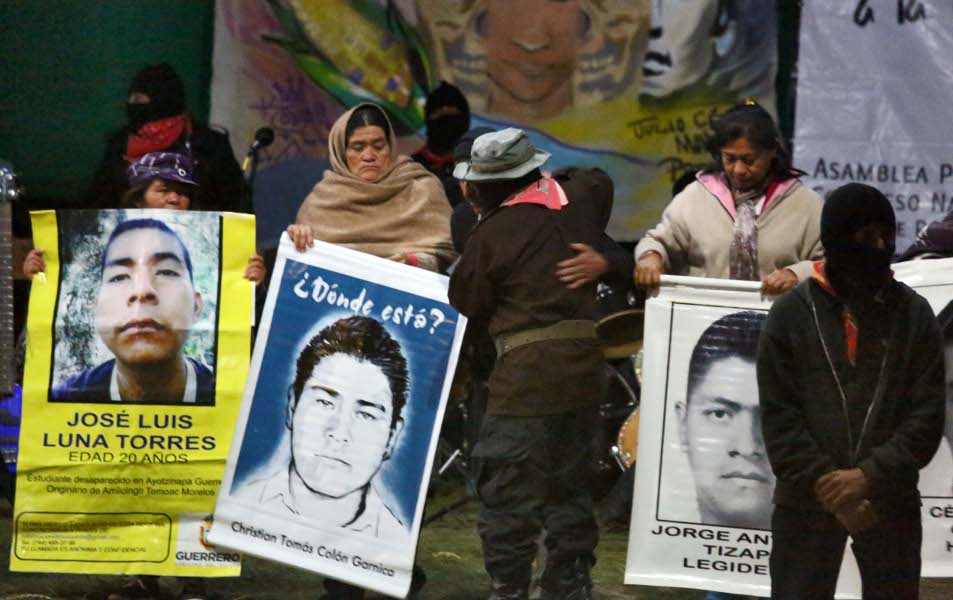 Zapatista spokesperson Subcomandante Insurgente Moises gives a hug to each of the family members of the 43 students from Ayotzinapa, Guerrero disappeared on September 26th by municipal police. The family members of the disappeared hold banners with the faces, names and ages of their sons. The students, who were studying to be rural teachers, ranged in age from 17 to 23 years old.

U.S. President Barack Obama met with Mexican President Enrique Peña Nieto in the White House on Tuesday to discuss topics ranging from bilateral trade to immigration to security policies.  Outside the White House, dozens of protesters gathered in freezing temperatures to demand justice for 43 students abducted by police in the state of Guerrero.

In Mexico, relatives of the disappeared students brought in the new year with members of the Zapatista National Liberation Army. The Zapatistas – or EZLN – commemorated the 21st anniversary of their indigenous-led uprising in Chiapas by calling for Mexican social movements to join forces during a two-week Global Festival of Resistance and Rebellion Against Capitalism. Tim Russo brings us more from Chiapas, Mexico.

Speaking from a stage donned with banners and clouded by the Chiapas highlands winter fog, Zapatista spokesperson Subcomandante Moises greeted 2015 with solemn words. He said 2014 had been a tough year for Mexicans and the Zapatistas who suffered a series of paramilitary aggressions against several of their communities.

Moises, who stood before 43 empty chairs and was  accompanied by family members of the 43 students who were disappeared after a police attack in Guerrero on September 26th, said that it is every Mexican´s duty to organize to prevent similar attacks in the future.

“What we know and keep in mind about the struggle from Ayotzinapa is that only as organized peoples will we discover the truth,” he told the audience. “And not only the truth that disappeared in Ayotzinapa, but also the truths that have been kidnapped, incarcerated and assassinated in every corner of planet earth. It is with this now-absent truth, that we will construct justice.”

The case of the 43 missing students last seen in police custody has catalyzed a national movement in Mexico after years of violence attributed to the drug war. Tens of thousands have vanished without a trace, many abducted by criminals, others taken away by state agents.

Author and independent journalist John Gibler has been on the ground in Guerrero investigating the disappearance of the 43 students in Iguala the night of September 26th. He was present at the Zapatista gathering in Oventic and San Cristóbal de las Casas, Chiapas during the Global Festival of Resistance and Rebellion Against Capitalism.

Gibler said a common thread unites the Zapatistas and the families of the 43 students from the Ayotzinapa teachers’ college and connects them both to national social movements.

The case of the students has “become a kind of national focal point and site of moral outrage, same with the Zapatistas,” he told FSRN. “The Zapatistas, when they roise up in arms on January 1st 1994, became this voice and expression for a whole host of indigenous and non-indigenous complaints against the structure of governance in Mexico. So you see these two incredible points of moral power and legitimacy meeting, coming together, this focal point of pain at this moment and this focal point of a possible avenue of struggle coming together. I think this can be potentially very powerful.”

Official and independent searches for the missing students resulted in the discovery of multiple mass graves. Results of genetic testing on a bone fragment have confirmed the identity of only one of the 43 students. Two students and three other civilians, not directly related to the students, died the night of the police ambushes.  The disfigured body of a third student– Julio Cesar Ramirez Nava – was found the day after.

“We are here to ask for your help in finding his schoolmates,” she said. “My son can no longer help bring them back which is why I joined the others. That is why I am here with them now, because with help from all of you, we can help to find them because we know that they are not lost, that the government has them. The government took them and with your help we can get them back.”

The link between police and the disappearance of the Ayotzinapa students has shifted the drug war narrative within Mexico away from one of a fight between government good guys and bad narcos, prompting serious questions about corruption and complicity between state actors and organized crime.

“What happened on the streets of Iguala on the 26th and the 27th reveals rather the precise nature of the state, the nature of the government,” says John Gibler. “That there is no comprehension of the functioning of organized crime outside the structure of governance. And the reverse: there is no analyzing and understanding the functioning of the state without its core organized criminal mafia element. So what we see here is the full merger.”

The scandal forced the Governor of Guerrero to resign in October. Both the ex-mayor of Iguala and his wife sit in high-security prisons awaiting trial on charges of organized crime, drug trafficking and money laundering. But – as this week’s meeting between the Mexican and US presidents indicates – the human rights scandal has not changed Washington’s support for increased militarization under the banner of drug prohibition on the ground in Mexico.