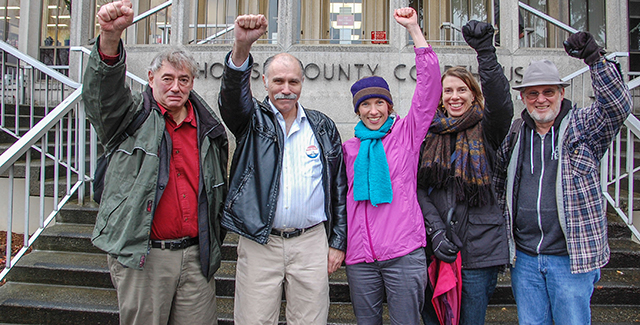 Members of the Delta 5 - Patrick Mazza, Mike LaPoint, Abby Brockway, Liz Spoerri and Jackie Minchew (left to right) - stand in front of the courthouse where their trial is taking place. (Photo: Courtesy Delta 5)

*EDITORS NOTE: The jury in the Delta 5 case returned a mixed verdict on Friday, January 15, 2016. The  defendants were found guilty of trespass, not guilty of obstruction. The state recommended  suspended sentences. This story was updated accordingly in the Weekly Edition.

Five people who blocked the path of an oil train in Everett, Washington north of Seattle last year are on trial this week, facing criminal charges for their civil disobedience. The case of the Delta 5 may become a precedent setter, after the presiding judge reversed himself just days before the trial was set to start and allowed a so-called “necessity defense.”

While the defendants plead their case in the Washington state courtroom, regulators in Washington, D.C. are considering six new oil-by-rail facilities. And in Vancouver, Washington federal officials are holding hearings on what would become the largest oil-by-rail terminal in North America. With Congress’ recent decision to lift the 40-year-old oil-export ban, more proposals are expected. Activists have pledged an increased campaign of direct action and civil disobedience to challenge these terminals. Nell Abram talks to FSRN’s Seattle-based correspondent Martha Baskin, who has been attending the trial.

Nell Abram:  Martha, what exactly did the defendants do that prompted criminal charges?

Martha Baskin: In September of 2014, in the very early dawn, they took a steel tripod that they had created beforehand and put it on one of the tracks in a BNSF railyard, it’s called the Delta Rail Yard, in Everett, Washington, north of Seattle. This rail yard is “a zillion acres,” according to one of the police agents who was called as a witness. It’s a huge, huge rail yard. They did that because, already by the fall of ‘14, it was clear to many people that federal regulations remained very, very weak on the safety of oil trains, and they would continue to explode, you know, right and left, all across the continent.

NA: The judge reversed himself on an earlier ruling and is now allowing the so-called “necessity defense” in this case, a potential precedent setter as far as climate civil disobedience goes in the U.S. Is that a game changer for the defendants?

MB: That is a game changer. Necessity defenses, I believe, have been used for those who blocked trains carrying, you know, trident submarines and nuclear warheads way back. It has been used in the U.K., back in 2008, when six Greenpeace activists used climate change as a legal defense, a legal necessity defense, and were cleared of causing criminal damage at a coal fire power plant. But until the trials at Delta 5, no similar case has been argued in the U.S.

NA:  Martha, you’ve been attending the court proceedings. What’s been going on inside the courtroom?

MB: The courtroom has been quite interesting, very exciting. First of all, everyone is squeezed in like sardines, it’s a tiny place. All eyes are very much on the lawyers and the defendants. The jury, a good half of Monday took up jury selection. That was rather interesting. When the sole prosecutor, the sole man who was representing the state, his focus when he was trying to weed out jurors was he asked them if they were  familiar with protests like the KKK and people who’ve been protesting at Planned Parenthood clinics. And he seemed to be trying to make a connection with the Delta 5 protesters and those protesters, and I don’t know if he succeeded. It’s been a very interesting trial to watch.

NA:  Who are the five defendants?

MB:  The five defendants, they came together under Rising Tide, which is very much active in the northwest, and in Oregon as well. But they also are five independent people, they are very, very independent people. One is a retired music teacher; one is an assistant middle school teacher; another co-owns a coffee shop in a nearby town where the rail tracks run close by, this is also a man who has run for political office; another woman, Abby Brockway, the woman who repelled herself to the top of the tripod, is a house painter. She and her husband own this small business and her entire family have been in the courtroom the entire time. And then the other, the fifth of the Delta 5, is a man who probably has the most climate research and climate work behind him. He’s written numerous books and helped found a nonprofit, Climate Solutions Organization, and has a lot of legal climate work under his belt. But he told the court that the time had come, especially with catastrophic climate change at our throat, day in, day out. There came a time because of disruptive climate change, and because his teenage daughter asked him, “Is there any hope, Dad?” that he felt the time had come to put his line on the rails.

NA: The Delta 5 trial comes at a time of rapid expansion of oil-by-rail in the Pacific Northwest. In fact this week there are public hearings in Vancouver, Washington on a massive oil-by-rail hub. What’s the status of that project?

MB:  The status of that development project, this week was the last of public hearings held by the state’s energy efficiency evaluation outfit that are reviewing permits for the terminal. There’s been quite a lot of push back against the terminal, ever since it was proposed by Tesoro Oil Company, a Texas oil company, and Savage, a facilities management company. And there’s been huge push back, primarily because it’s slated to be North America’s largest oil-by-rail facility. So public comments will end this week, then up until January 22nd the public can continue to make comments, but then, both proponents and opponents of the Vancouver Energy Terminal will come to the table and argue their case before the state evaluations facility people, and then we’ll see what happens. But, things look like they’re still on hold for all of 2016.

NA: Finally, back to the Delta 5 courtroom. Where is the trial in the process, and what’s to come?

MB:  At this point, a BNSF railroad employee is on the stand, as well as another expert who is going to talk about the public health impacts from coal dust and, obviously, the public safety issue connected with exploding oil trains. Then it may be that, already by 2 o’clock, Pacific Time, the judge will begin to instruct the jury, to tell them what they can and cannot look at in their deliberations.