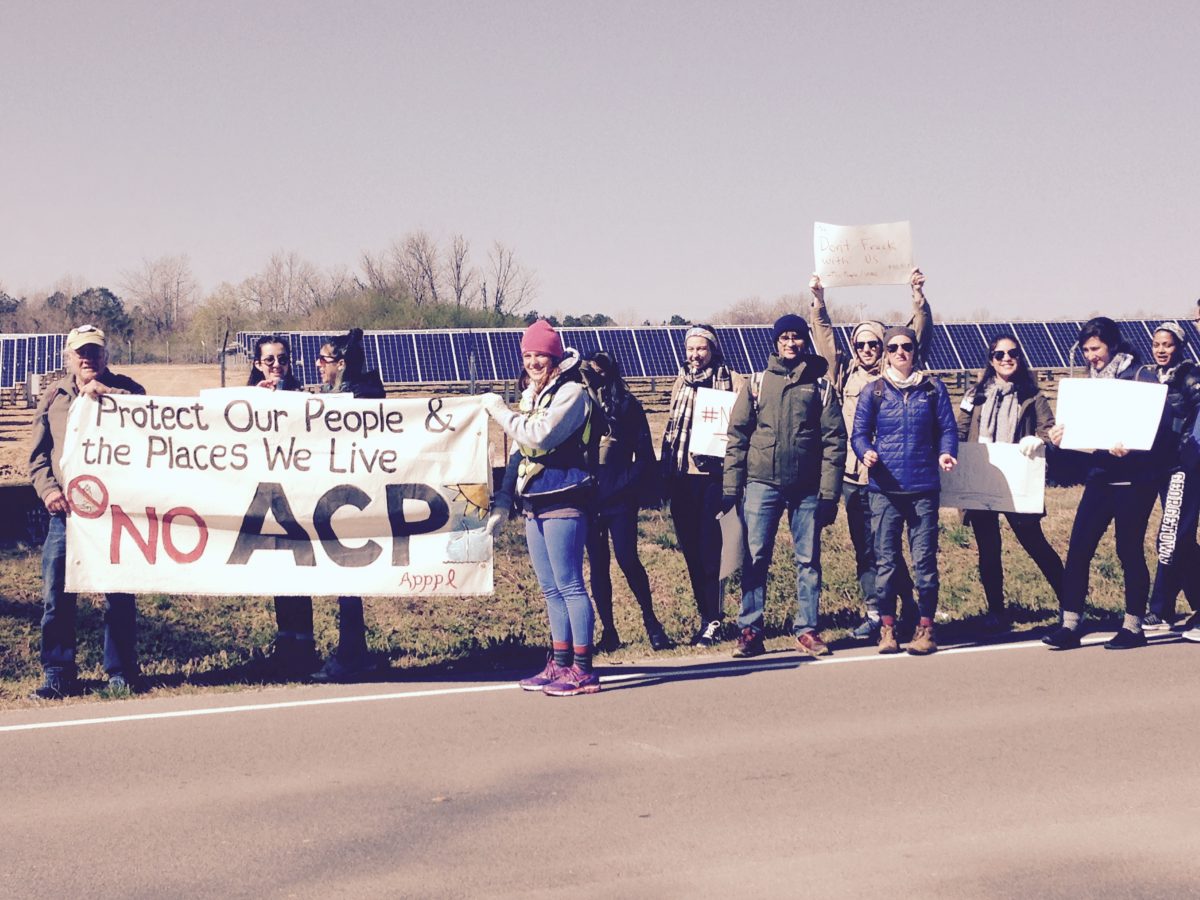 Legislatures in states with ongoing – or planned – pipeline projects are moving to increase penalties for certain types of protests aimed at opposing pipelines.

The governor of South Dakota signed a bill into law this week that bars groups of more than 20 people from gathering on public lands. The State Senate of Oklahoma is considering HB1123, which would broaden the definition of trespassing while making peaceful protesters collectively responsible for any property damage during demonstrations.

A new pipeline project that is drawing fire from critics is the proposed 550-mile Atlantic Coast Pipeline, which would transport fracked gas from West Virginia across the state and into Virginia and North Carolina. Activists and members of affected communities in North Carolina are walking the 200-mile section across their state’s proposed route from March 4-19, bringing together Native Americans, black and white farmers, students, people of faith, and climate organizers. Melinda Tuhus reports from the walk.

The walk, organized by the Alliance to Protect Our People and the Places We Live, traverses lower income counties with high numbers of African American and indigenous residents on the flat farmlands and swamps of eastern North Carolina. Organizer Steve Norris points out the site of some equipment proposed along the pipeline route on the Virginia/North Carolina border.

The 42-inch diameter pipeline would carve an 8 to 12 foot trench and a 125-foot construction corridor. It’s a project of Duke Energy, one of the world’s largest utilities, and Dominion Resources, which would build the pipeline. The Federal Energy Regulatory Commission released a draft Environmental Impact Statement last December declaring the project would have “no significant environmental impact.”

“I’m really concerned because I want to preserve as much of our ancestral lands as possible,” explains Ericka Faircloth, who identifies as Lumbee and has participated in the walk. “These days it’s all about economic development and money, and the native way has never been about money or developing traditional lands. What we need to be focusing on is remembering our culture and remembering what’s important and protecting burial sites and protecting the lands that we do have, and not accepting pipelines or oil and gas infrastructure, because that was never our way of life.”

“When I was younger, it wasn’t very easy for people of color to buy lots and build homes in areas where they wanted to, so my father made the decision to start breaking up our farm and selling lots to people of color to build a community around where I live now,” Exum recalls. “And we’ve been there for years. And this proposed pipeline would really just decimate our community.”

Marvin Winstead is a farmer with Nash County Stop the Pipeline. He said the proposed route perfectly bisects his 70-acre farm: “In the past, it’s been a traditional eastern North Carolina tobacco farm. My father also raised hogs there and so forth and then rotation crops of wheat, corn, soybeans, cotton – that sort of thing.”

Sweet potatoes are another big crop and he and other farmers say the pipeline running across their land would prevent them from driving semi-trucks onto their fields to load their crops for market.

As in other pipeline fights, homeowners are up in arms about state governments using eminent domain to hand over their land to companies if they refuse to grant an easement. They also are wary of the fact that in rural areas, according to the federal Pipeline and Hazardous Materials Safety Administration, pipeline companies are allowed to use steel just over half as thick as what is required closer to population centers, making them feel even more at risk of an accident.

Most of the residents or shoppers at small stores the walkers encountered hadn’t heard of the pipeline, since the company is required to notify only those whose property it would cross, even though many others would be in the 1,100-foot blast zone or the two-mile evacuation area. Most were not happy to hear about the plan, but Mike Cook was enthusiastic.

Dominion’s own documents promise almost 3,000 jobs overall but only 18 permanent positions in North Carolina, and indicate that half the construction workers would come from out of state.

Opponents say the pipeline will probably not lower gas prices locally as the fuel is likely destined for export, based in part on the fact that there are just three planned taps into the pipeline across the whole state, making extraction for local use problematic, and both Dominion and Duke are involved in building liquefied natural gas export terminals. And they say any tax payments to the host counties would be offset by the increases customers would see on their utility bills, as the companies are guaranteed a return on investment of up to 14 percent.

Opponents also dispute the idea that the pipeline needs to “go somewhere.” They say it would damage the land, impact their culture and health, and fuel more climate change.

The Rev. Mac Legerton directs the Center for Community Action in Lumberton in the heart of the Lumbee community. He says the current route is the third one proposed for this pipeline. The first and second ones were going to go near Durham and Raleigh, and would have been more direct and less expensive.

“Neither one of those first two proposals were going to touch eastern N.C. But, of course, those areas of our state are where there’s a lot of wealthy folk and white folk.” Legerton points out. “And in a very short time, with their voices, those two proposals were scratched.”

Dominion did not return repeated requests for comment about the pipeline route.

Opponents say it’s unnecessary, because wind and solar installations are growing exponentially, and could power the state with none of the harmful impacts of fracked gas.

The walk wraps up on Sunday. Inspired by other successful campaigns to stop construction of gas pipelines, the activists and their energized neighbors plan to lobby county and state officials and keep up their grassroots campaign across North Carolina, Virginia and West Virginia to stop the pipeline. The 90-day comment period on the draft Environmental Impact Statement ends on April 6.