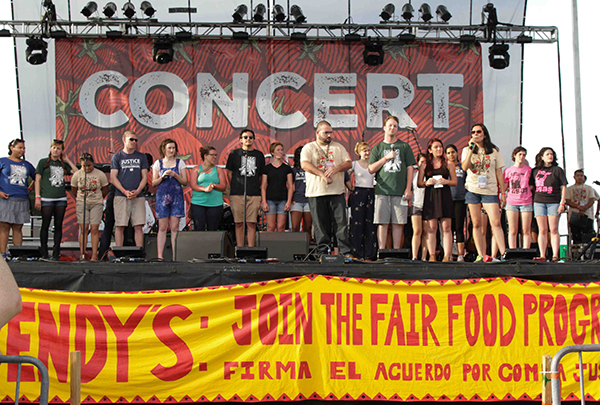 An alliance between student groups and farmworkers is organizing a nationwide boycott against Wendy’s restaurants. On Saturday in St. Petersburg, Florida the Student/Farmworker Alliance unveiled plans to boycott Wendy’s on several college campuses and in nearby communities across the country. They want Wendy’s to join the Fair Food Program spearheaded by the Coalition of Immokalee Workers, a group of mostly migrant farmworkers based in rural southwest Florida. Several fast food and grocery chains have signed on to the Fair Food Agreement, but Wendy’s — and the large southern grocery chain Publix — remain holdouts. During Saturday’s March and Concert for Fair Food in St. Petersburg, FSRN’s Sean Kinane interviewed Gerardo Reyes of the Coalition of Immokalee Workers about the alliance’s fight for farmworker justice.

Sean Kinane: One of those alliances is the Student/Farmworker Alliance and they announced an action against Wendy’s. Tell us about that.

Gerardo Reyes: Yeah, the Student/Farmworker Alliance is organizing a boycott in the universities across the nation that have Wendy’s on their campuses. And they’re also going to organize in the universities that have a nearby restaurant, a Wendy’s, to adopt it and then do the boycott and raise awareness in the communities to ask people not to support their business until they join the Fair Food Program.

SK: What is the Fair Food Program?

GR: The Fair Food Program is a collaboration between workers, growers that are participating in this program and also corporations that are implementing with us the rights that we as workers designed to ensure the application of the rights that are contained under the booklet that we distributed in the farms. These rights are, for example, the right to complain without retaliation; the right to be working with protections against pesticides; against situations that are putting our lives at risk; situations of sexual harassment; the elimination of slavery. All of these things are part of the program. And any corporation the signs is committing to buy their purchases under the application of these rights for farm workers in the fields.”

SK: What has Wendy’s response been so far?

GR: Wendy’s response is basically to first say that they are already buying from tomato farms that are participating; they are doing the right thing. And while it is true that they buy, this is not a free ride. They are refusing to pay a penny a pound and that is one of the important demands of this campaign. Because that’s going to directly addressed the sub-poverty wages that Wendy’s, Publix and other buyers are creating with the way in which they use the market to dictate the prices. Workers receive stagnant wages because of the way in which the market is used. At the same time they’re not doing anything to guarantee that workers’ dignity is being respected. What were asking them to do is to condition their purchasing to the application of the rights under the Fair Food Program and to pay the penny a pound. Their response is to basically step back from Florida and try to concentrate their buying on Mexico and in other places where there is no program, where there is no regulation, where there is no rights for workers. They’re looking for a way out and basically what they are choosing to do, to not participate in this, is to go to places where workers are even more exploited in light of a proven solution for these abuses.

SK: You also have been targeting Publix as you mentioned. How have they responded to your calls?

GR: Publix continues to say that this is a dispute — a labor dispute — between workers and their employers. That is only in their minds because there are 90 percent of the tomato industry of the state of Florida that are participating under the program. They are doing the right thing but they need corporations like Publix to also support them by participating, by committing, by concentrating their buying power and support those businesses that are doing the right thing. What Publix is doing is instead of participating and paying the penny a pound they are basically saying that this is a labor dispute. That they will never sign an agreement with the workers that that we are asking them to pay directly to the workers a check and that is not true. They are saying many things to confuse people. They are lying and it is time for them to stop doing that, to start being a responsible corporation, especially after being a witness of many abusive conditions including slavery and still not being able to touch their hearts and realized that it is because of the way in which they ignore the situations on their own supply chain that’s all these abuses have happened. For the first time we have a solution it is time for them to get in line with the fair food program. Many people are here today to join us in making this call to Publix and any corporation that refuses to recognize the humanity of the workers. So it’s just a matter time. But this is a great opportunity for them as a business to do the right thing without crucifying, without destroying the ability of workers to live a dignified life.

SK: And finally, I want to ask you about the turnout. What do you think about the response that you’ve gotten in St Petersburg?

GR: We had thousands of people marching with us on the parade and then we had more people that came to enjoy the music and hear and see some of the theater we created from Immokalee (Florida). And there is a lot of people that have been dancing. There’s an atmosphere of celebration but there’s also an atmosphere of struggle. A lot of the people that are here are here because they want to hear what are the next steps of both campaigns (Wendy’s and Publix). They are listening carefully to what the Coalition and the alliances that are closer to the Coalition are organizing in the southeast focusing on Publix, but also nationwide focusing on Wendy’s. And it is an ongoing and growing, fast-growing movement. This movement is going to — sooner or later — cut Publix and Wendy’s at a point in which it will be impossible for them to participate in something like this because at the end, the consumers have the last word. And more and more consumers are demanding the same thing: fair food now. So I would say to Publix and I would say to Wendy’s, for how long do you think you can hide from the justice that the workers have been seeking for so long? For how long are you going to ignore your own consumers and for how long do you think that unjust conditions in the fields are a good business for you? For how long do you think that your image is going to resist being tired to be abusive conditions you have allowed to be part of it?