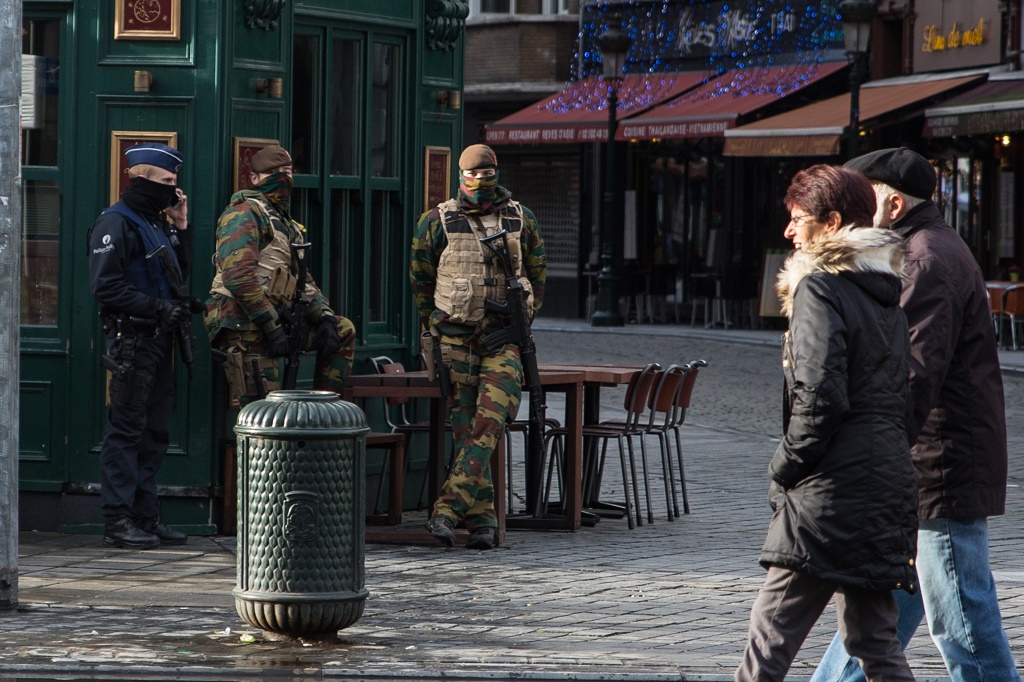 President Barack Obama met with his French counterpart at the White House today for talks following the Paris attacks in which 130 people died. French President Françoise Hollande and President Obama both pledged to increase militarily attacks against ISIS in both Syria and Iraq. Hollande is on a multinational trip aimed to broaden a coalition of countries in the fight against the jihadist group, a partnership now dominated by France and the U.S. The French president will also meet with the leaders of China, Germany and Russia this week.

Meanwhile, an intense hunt for suspects connected to the November 13th attacks continues in both France and Belgium, where officials have charged four people suspected of involvement in the attacks. In a series of raid, police detained 21 people, 17 have now been released. But the city remains on lock-down. FSRN’s Nell Abram spoke with correspondent Aris Oikonomou – who is based in Brussels.

Nell Abram:  Today is the fourth day of an extensive lock-down in the Belgian capital of Brussels, also the seat of the EU government. Schools, museums, and public transit lines are closed as part of a hunt for suspects in the network of the Paris attackers that spans France and Belgium. First, bring us up to date on what’s happening in Brussels.

Aris OIkonomou:  Well, actually, right now, the situation is, as you described, we are reliving the fourth day of a lock-down actually. They don’t call it a state of emergency as they do in France, and here they call it just a ‘maximum terrorist alert’ which is a ‘level four.’ What we do have is lots of police and army in Brussels, and a massive group of military that’s been deployed, actually, in the town center. They are guarding all the important buildings, such as the parliament – the federal parliament and the local parliament – as well as the European Union, which you just said, because the headquarters are here, NATO headquarters, and obviously tourist attractions that are being guarded. Usually it’s army and police combined patrols in the streets. Pretty much, that’s the official side of it, that’s the military and police side of it.

As far as people is concerned, we’re actually used to it now. The first days were difficult to actually get used to it. It was…everybody was home, nobody went out, the metro was closed, the tramway – which is a type of metro on top of the earth – and that didn’t circulate, so you only had a few buses and taxis. So obviously, people weren’t outside, and that’s also applicable today.

NA: What is the mood like in the streets? Are schools open? What about access to healthcare?

AO: There was a lot a lot of paranoia at the beginning, there was a lot of fear. As I said, people wouldn’t go out, not only because there was no transport, but people were afraid, you know. On TV, they were talking about ‘We shouldn’t go out, you’re going to get shot by some jihadist.’ So people were afraid at the beginning. Then on Sunday afternoon and yesterday, Monday that is, you did have some people going out, and you started seeing people getting used to it. They were taking selfies in front of military vehicles. They were actually taking selfies with the soldiers. So, people were getting used to it, although the circulation of people was lower than usual. On Sunday evening, actually, the National Committee for Security, they decided to prolong the maximum level of security for Monday, and on Monday they inform us that they will continue for today and tomorrow, part of tomorrow at least. And so they closed schools, they closed all the schools from primary to tertiary, all education was halted. So, obviously, well, parents with small kids kept them home. And, however, hospitals were open, hospital and healthcare facilities, all of them were open. So people did have access, if needed, to healthcare agencies, generally.

NA:  In France a three-month state of emergency is in place, granting police and security officials sweeping powers to act without judicial oversight. What’s the political climate in Belgium around extending similar powers?

AO:  Here, you didn’t have an attack, you didn’t have dead people, you just had suspects. So the situation is very different. You had a potential threat, so there was not even a talk, as far as the parliament is concerned, about applying such policies here. That’s why I said at the beginning they have a ‘maximum terrorist alert’ level rather than a state of emergency, which means much more is given, much more authority and power is given to security officials. Here there’s no such discussion. Some parties, the majority party, actually – the National Flemish Party – which is known for its general appreciation of much more dictatorial types of policies, it was actually quite open to that sort of state of emergency. But generally, it wasn’t followed by other parties within the parliament, so there’s no such discussion as far as Belgium policy is concerned, politics is concerned.

NA: Despite the fact that all of the attackers identified so far were either French or Belgian nationals, the Paris attacks sparked widespread anti-refugee rhetoric – ignited by a forged Syrian passport tied to one of the attackers. In France, President Francoise Hollande responded by increasing the number of refugees the country has pledged to take in to 30,000. In the United States, lawmakers quickly advanced a bill that would basically block Syrian and Iraqi refugees from entering the country. What’s the situation regarding refugees in Belgium?

AO:  Belgium did have a big amount of refugees, well relatively to population in size. Iraqi, mainly, Afghani refugees, that made a camp in the town center at the beginning of September for a month. So generally they confront the same issue. They are very open to welcoming them, refugees, the people as well as politicians. So, there is no open, at least, debate, about closing the the frontiers, the borders, or closing or even re-discussing about refugees. That sort of discussion is present in the NVA, regionalists and nationalists, party, that I said before is very keen to apply dictatorial policies. But, generally, they’re pretty open, this society and political parties in parliament are very open to still accepting refugees.

NA: When is the lock-down expected to be lifted? Any indication?

AO:  Well, the main, the first idea is tomorrow the subway and schools are going to open. Tomorrow, Wednesday. So, slowly but surely, they’re going to lift the lock-down and try to return to normal life. Apparently, the National Committee for Security proposed, or at least advised, Prime Minister Charles Michel to lift the lock-down for tomorrow afternoon, that is Wednesday afternoon, in order for life to come back to normal.