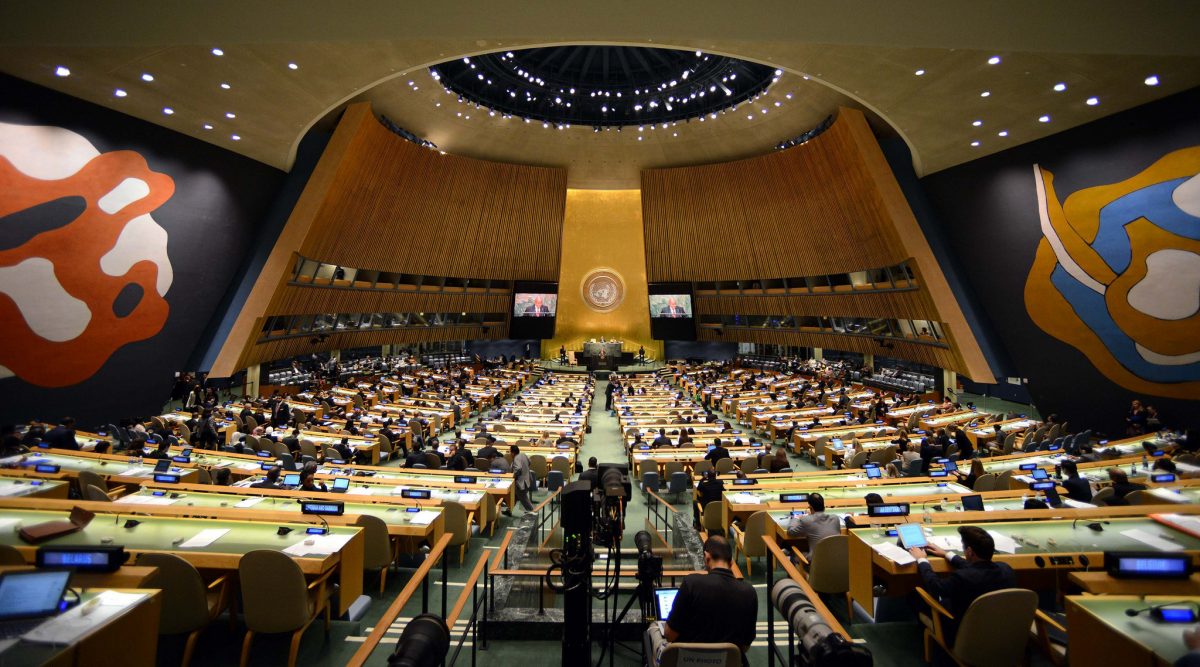 Last year’s epic flow of refugees seeking sanctuary in Europe transfixed the world and finally put the issue of migration at the top of the political agenda. To that end, the 71st General Assembly of the United Nations was for the first time devoted to the large movements of migrants and refugees. But what exactly did it accomplish? And was it enough to provide support to over 65 million displaced people around the world? Andrew Connelly reports from New York City.

With New York’s streets packed with heads of state, delegates from over 190 countries, U.S. presidential candidates and a terrorist on the run, security in the city was on alert for the opening of this week’s UN General Assembly (UNGA) meeting and side summit on refugees. The UN estimates around 65 million people are displaced currently – the highest since World War II.

Mohammed Badran fled the Syrian capital Damascus in 2013 and ended up in the Netherlands. Within a short time there, he founded an NGO which now has a network of 600 Syrian volunteers helping and collaborating with their new Dutch hosts.

“Our goal from this summit is to make people feel that they have been here, through us,” Badran told FSRN the night before addressing the UNGA. “And the second thing is to push the international community to do more for refugees by showing how refugees are already taking action.”

Monday’s summit of world leaders delivered little more than a list of previously stated responsibilities, and the international community was given another two years to reach a global compact on the issue. Tuesday’s Obama-led high-level pledging meeting of 52 countries and international organizations provided more substantial commitments.

The White House announced that a total of $4.5 billion had been pledged be used for UN and other humanitarian agencies, a doubling of refugee resettlement places and plans to improve access to employment and education.

“We cannot avert our eyes or turn our backs. To slam the door in the face of these families would betray our deepest values,” said Obama. “It would deny our own heritage as nations, including the United States of America, that have been built by immigrants and refugees.”

The outgoing U.S. president promised to increase his country’s own refugee intake to 110,000 in the year 2017 – a commitment that will fall on his successor to honor.

The summit of refugees would likely have never taken place had not one million people fleeing conflict – mainly in Syria, Iraq and Afghanistan – entered Europe last year. And yet dramatic events in the Mediterranean threatened to overshadow the summit and served as a reminder that deep challenges still linger.

On Monday, a massive fire ripped through one of Europe’s largest refugee camps on the Greek island of Lesbos, further displacing around 4,000 men, women and children. On Thursday, a boat carrying up to 600 migrants and refugees en route to Italy capsized eight miles off the coast of Egypt. Survivors reported that hundreds may have drowned.

But as Obama implored the world to respond to displacement crises, a mile away a shadow summit organized by the Center for Migration Studies asked why his administration has turned its back on Central American refugees banging on America’s southern door. Last year, there were more violent deaths in the Northern Triangle countries of Honduras, Guatemala and El Salvador, than in Afghanistan. The region remains in the grip of criminal gangs who have unleashed a wave of extortion and violence which the governments seem unable – or unwilling – to control.

Noah Bullock is the director of the Cristosal Foundation, an organization in El Salvador that provides sanctuary to Central American families fleeing gang-related violence. Working on the front line of an invisible war, he’s frustrated that most Americans are unaware of the scale of the humanitarian crisis.

“One of the challenges in trying to build a regional response to our migrant and refugee problem here in America is that we don’t have the same optics that made the compelling case in the Syrian and Mediterranean situation,” Bullock says. “Yet, I think it’s almost intentional that we haven’t wanted to see it. There were photos circulating in the Mexican press of three Salvadoran children bodies who washed up on the beaches of Chiapas and something similar happened in a river in Guatemala. So the same drama is being lived in our hemisphere but we, in some ways intentionally, don’t see it.”

Suny Rodriguez Alvarado fled death threats from Honduran authorities after her family members were murdered, but was detained with her son upon reaching the United States. She is now suing the federal government for mistreatment, and was hoping President Obama might use the UN platform to draw attention to America’s own refugee crisis.

“I hope he changes his immigration policies and gives us an opportunity, and people should know that the treatment that people experience in detention centers is terrible,” says Rodriguez Alvarado.

For humanitarian observers, the coming months will be crucial to monitor the implementation of the support pledged to help the displaced. For the refugees themselves, they can only keep asking and hoping.