Protests and confusion at U.S. airports in wake of executive order barring citizens of seven countries 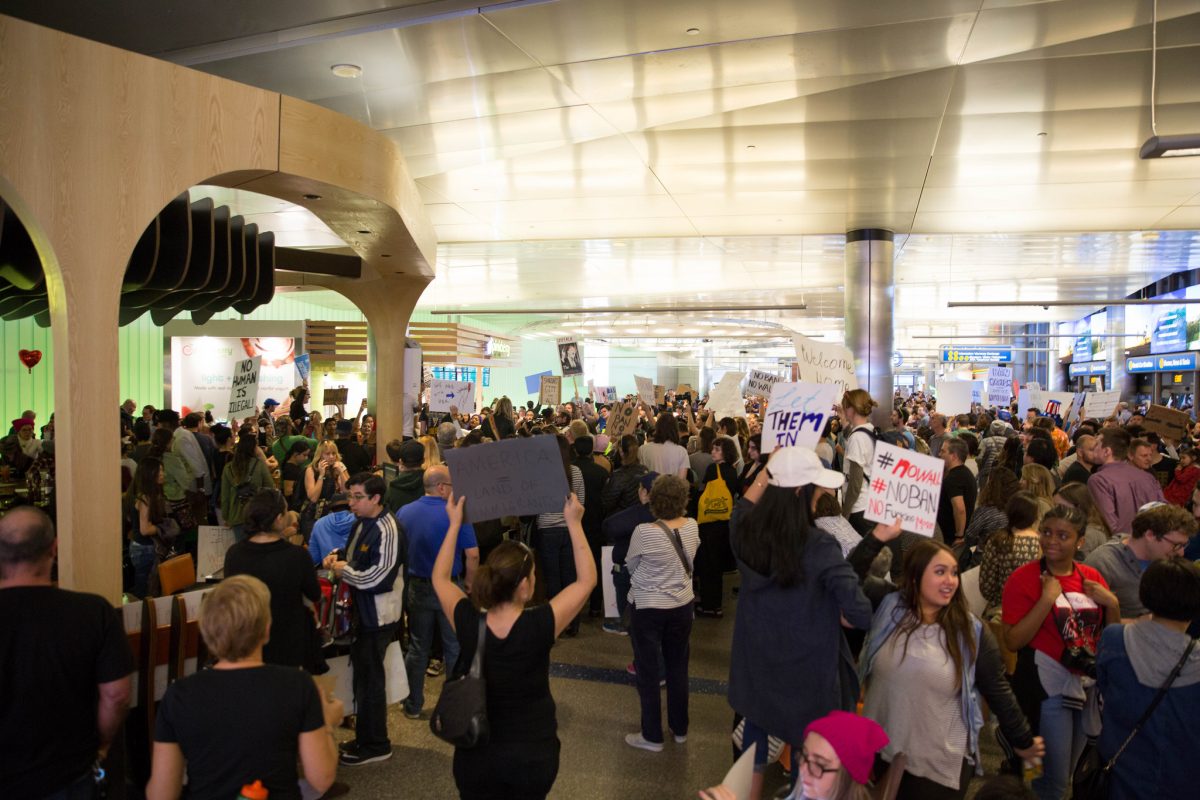 A protest against the ban on Muslim immigrants at LAX. (Photo credit: cindychu via Flickr / Creative Commons)

An executive order signed on Friday afternoon indefinitely barring Syrian refugees from the United States and slapping a 90 day ban on entry for citizens of Iraq, Syria, Iran, Somalia, Libya, Sudan and Yemen – including green card holders – prompted protests and confusion at airports across the country. Shannon Young has more.

Hundreds of protesters swarmed the Los Angeles LAX airport over the weekend in a scene that replicated itself at a handful of other international airports across the United States.

They arrived on short notice to vocally oppose an executive order that indefinitely slammed the nation’s doors shut to Syrian refugees and banned citizens of seven countries from entering the U.S. for 90 days. All seven of the countries are Muslim-majority and the restrictions apply to U.S. permanent residents, also known as green card holders. The executive order took immediate effect and travelers from countries on the list who were literally mid-flight at the time were detained at airports upon arrival.

The order prompted criticism from members of the diplomatic corps who voiced their opposition through the State Department’s internal complaint mechanism, some of which was leaked to the press. When asked about it in the Monday White House briefing, Spicer suggested the concerns were exaggerated and made by foreign service officers who should consider another career.

“Obviously, we’re aware of it. But I think that any government official, or anyone, who doesn’t understand the president’s goal in this and what this actually was – again, I think this has been blown way out of proportion and exaggerated,” Spicer said. “Again, you talk about in a 24 hour period, 325,000 people from other countries flew in through our airports and we’re talking about 109 people from seven countries that the Obama administration identified. And these career bureaucrats have a problem with it? I think that they should either get with the program or they can go.”

Meanwhile, the detentions continue as people from countries on the list arrive on flights, some of them green card holders who have already gone through the years-long process to obtain permanent residency. Immigration lawyers say some green card holders are being pressured to forfeit their residency papers.

At Saturday’s protest at LAX, Andrew Cohen – spokesperson for Unite Here Local 11 – told FSRN that the union reacted quickly because of its large membership of immigrants and due to past experiences with organizing workers at Trump-owned hotels.

“When this attack comes down, it affects us, it affects all the working class. These are our members. This attack on Muslim workers, it’s the same as the attack on immigrant workers,” Cohen said. “It’s a sign of things to come and so it’s basically on us to either organize or let them come and destroy us. I think that it’s a call to action for every single person in the working class right now.”

The policy will impact large immigrant communities in cities like Los Angeles, which is home to what is estimated to be the world’s largest concentration of Iranians in diaspora.