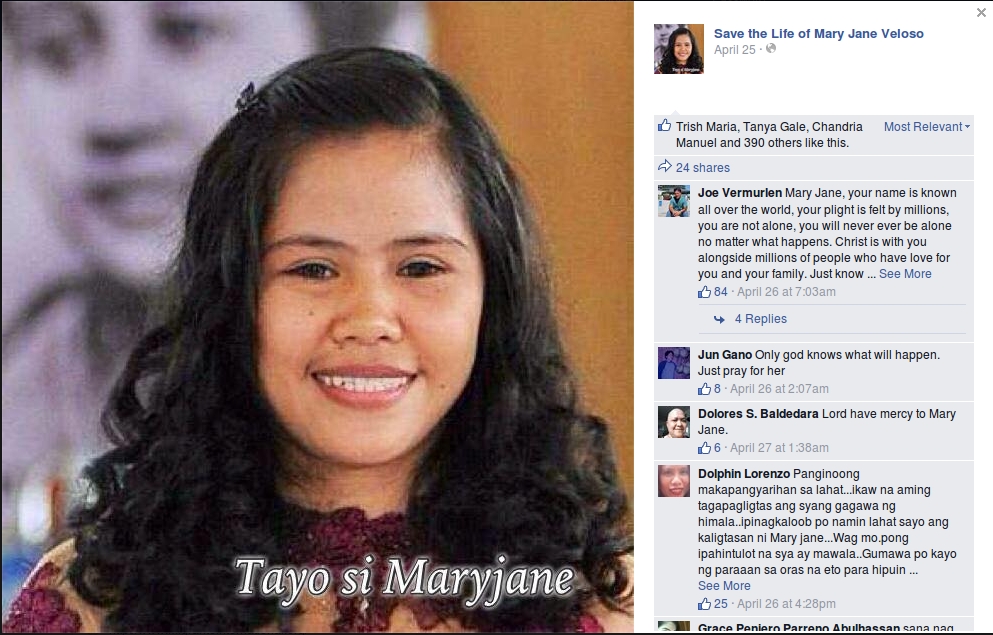 Screenshot from Facebook campaign calling for the release of Mary Jane Veloso.

An Indonesian firing squad executed eight people just after midnight local time Wednesday as their families gathered within earshot of the killings. All eight were put to death for drug-related crimes. In an 11th hour reprieve, Indonesian authorities delayed killing a ninth person – a mother of two from the Philippines. Madonna Virola has more.

Filipino migrant worker Mary Jane Veloso, convicted of drug smuggling, was scheduled to be executed by a firing squad in prison island of Nusakambangan in Indonesia Wednesday evening.

But at the last hour, she was granted a temporary reprieve. The other eight foreign prisoners were killed despite humanitarian appeals and global condemnation.

The postponement came after Philippine President Benigno Aquino Jr. appealed to Indonesia’s President Joko Widodo, saying Veloso could be a key witness in a drug-trafficking case. Her recruiters, Maria Kristina Sergio and her live-in partner, surrendered to the police because they were receiving death threats.

The National Bureau of Investigation had earlier charged them with illegal recruitment, human trafficking, and fraud cases.

Veloso claims she was promised a job in Malaysia but was sent to Indonesia. On her way to Indonesia, she says drugs were secretly placed into her suitcase.

Luzviminda Ilagan is a Congresswoman from the women’s political party Gabriela. She says the government needs to do a better job educating the public about the dangers they may face as overseas foreign workers – or OFWs – in pre-departure orientation seminars.

“The PDOS should really be a very serious and comprehensive input, warning our departing OFWs about the dangers that await them. These departing OFWs should also understand the culture of place they are going, know the numbers of the embassy , the consulate of the Philippines so that if they get into trouble they can immediately contact our officials,” explains Ilagan.

Veloso was arrested at Yogyakarta airport in 2010 after authorities found 2.6 kg of heroin in her luggage. She was sentenced to death, and appealed the following year saying her trial translator was incompetent.

The Indonesian Supreme Court rejected her appeal and last Friday, she was transferred to Nusakambangan execution island along with the eight others put to death Wednesday.

Indonesia has gone strict on drugs because several die from it every day, according to Indonesia’s National Narcotics Agency.