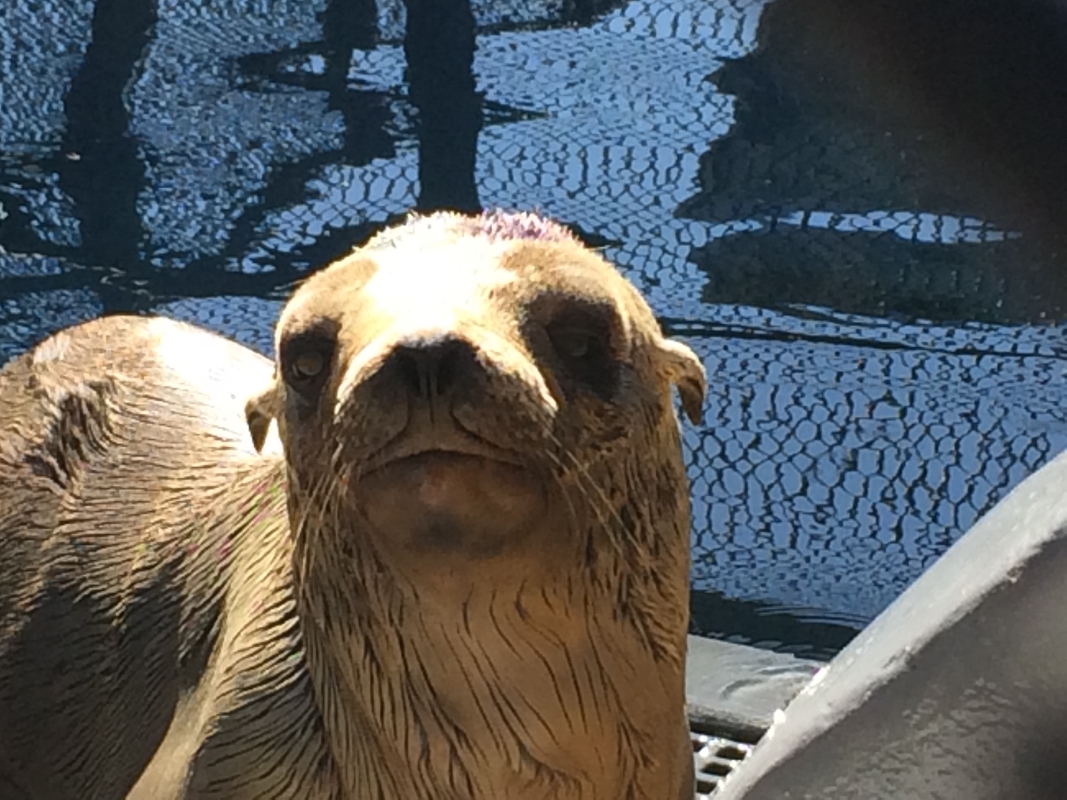 More than two thousand sick and starving baby seals and sea lions have washed up on California shores without their mothers since the start of the year. The precise cause is unclear. Rescue centers like the Marine Mammal Center in Northern California are working round the clock not only to try and rehabilitate them- but to keep them out of the sometimes harmful hands of the general public. FSRN’s Karin Argoud reports from Sausalito.

It’s breakfast time for the hungry sea lion pups at the Marine Mammal Center in Sausalito, California. Volunteer Hilary Kozeny is in one of the large cages that holds the mammals while wearing a plastic apron, gloves and rain boots.

Kozeny carries a large wooden board that covers her from her feet to her waist while feeding sardines to eight recently rescued sea lions and elephant seals. “Partially it’s to block them if they’re going to try to bite us, to protect us,” she says. “They’re wild animals and we’re approaching them they don’t know we’re trying to help them, they just think we’re scary people which is good we want them to be afraid of people when they get back into the wild so if we get close to them which we have to feed them they can get scared and try to bite.” She explains the other function of the board is to take away from the human shape so they won’t associate humans with food.

The 40 year-old center is one of the largest marine mammal rehabilitation hospital in the world. This year it’s responding to record-breaking numbers of starving sea lion pups washing up on the shores of California. More than 700 sea lions have been treated here since the start of the year, compared to the 146 animals treated in the first quarter of last year.

“This has never happened before this early in the year,” says Shawn Johnson, the center’s Director of Veterinary Science. “It’s so unusual and there’s no really good explanation for it.” He tells FSRN that when the mammals first arrive at the center, many have never had a fish before – only mother’s milk. They learn from other animals in the pen that they have to put a fish in their mouth and learn how to swallow it. “We don’t release them until they have learned that skill,” he said. Johnson adds many of the mammals arrive stressed and dehydrated and can only handle fish via tube feedings.

There’s no single proven cause to conclusively explain the large numbers of beachings, but Johnson says it does coincide with record-high ocean temperatures off the California coast.

In addition to rehabilitation and research, the Marine Mammal Center also gives educational tours to students. Two boys named Mateo, Mateo Malko-Allen and Mateo George, are part of a group of fifth graders on a class trip.

“It’s really bad that all the food is going deeper and farther away so then the mothers have to go father to find food and the babies wait too long so there idea is to swim away,” says Malko-Allen. “But they are not old enough to swim very far or deep so the end up washing up on the beaches with their intestines swarming with parasites and they’re skinny and sick.”

“Some of them have pneumonia,” interjects George. “When I grow up, I’m going to be a mechanical engineer so I might be able to make a machine that could help keep the waters at perfect level for them.”

But short of magical – or mechanical – solutions, questions remain. What will the seal and sea lion pups do once they are back in the warming waters of the Pacific? If a shortage of food caused them to wash ashore, will there be enough to eat when they return to their native waters?

California Stranding Network Coordinator for NOAA Fisheries Justin Viezbicke says even seals that have been rehabilitated may not survive due to the current conditions in coastal areas. “It’s a very challenging situation,” he remarked. “Mother Nature is taking its course out there,  As humans we can do little things here and there but the reality is we cannot save all those animals.”

Viezbicke says another challenge is too much human interest in the disarmingly cute animals: “We have people picking up sea lions taking them home, people getting bit, people taking selfies with sea lions. People have very poor decision-making these days, in the day and age of the selfie. Everybody wants to get as close as they can and do all these things with these animals and the animals are sick and dying and they don’t have enough energy to really run away or to bite.”

What would the boys do if they saw a seal on the shore?

“Call the marine mammal center and say there is a seal stranded and hungry.”

How about what not to do?

“Pick them up and take them home because it’s technically illegal.”

Vizbicke says scientists are doing the best they can to get the seals off the beach and heroic efforts continue across the western coastline to nourish, study and bring the mammals back home to the sea.

In the meantime, he says “save that selfie for someone else.”