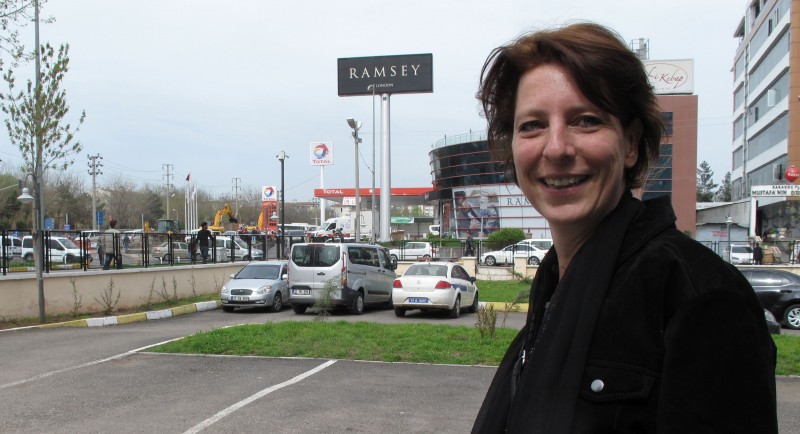 A European journalist went on trial in Turkey Wednesday for allegedly running afoul of the country’s anti-terror laws by sharing pictures and articles on social media. But the prosecutor now says the indictment lacks hard evidence and is recommending acquittal. FSRN’s Jacob Resneck reports from Diyarbakir.

Earlier this year, Turkish police raided Dutch freelance reporter Frederike Geerdink’s home here in the southeastern city of Diyarbakr. Prosecutors indicted the freelancer, accusing her of praising banned organizations including the PKK which is considered a terrorist organization by the United States and Turkey.

This morning Geerdink told the court that she never condoned violent acts and that the evidence presented was merely her reporting on sensitive subjects such as the funeral of militants killed by Turkish security forces.

In a surprise move in the court today, the public prosecutor assigned to the case told the judges that the indictment prepared by his colleagues failed to prove Geerdink had broken the law. He recommended acquittal, but judges postponed any decision until Monday when more senior judges will preside over the court.

Outside the courthouse, Geerdink says she’s partially relieved but still in limbo. “It’s a little bit strange because I didn’t expect the prosecutor even to ask for acquittal and now even the judge isn’t authorized to acquit me so we have to wait till Monday,” said the journalist. “It’s a little bit like I’m happy of course but it’s not official yet.”

The case has been watched closely as it’s the first time a foreign journalist has been tried under Turkey’s anti-terror laws in 20 years.

“These proceedings shouldn’t have taken place in the first place,” according to Johann Bihr of Reporters Without Borders, a press advocacy group based in Paris. “There’s a clear will to intimidate both Frederike and foreign journalists at large in this region.”

Earlier this week the government briefly banned the three most popular media sites until images from a hostage crisis that left a prosecutor and two assailants dead were removed.

“Just a few days ago the whole Twitter, YouTube, Twitter, Facebook platforms were blocked which is obviously a pretty worrying sign with Turkey joining a really restricted club of countries blocking such wide platforms,” Bihr says, adding that despite some progress in the peace process with Kurds, Turkey appears to be slipping backward. “So there are grounds for hope and for concern. Unfortunately so far we are more concerned than hopeful.”

If convicted, Geerdink would have faced up to five years in prison. The trial is scheduled to resume Monday.

Editor’s note: The text introduction to the audio has been changed post-publication to reflect the correct day of the hearing; Wednesday, not Tuesday. Copy error pointed out by the reporter.