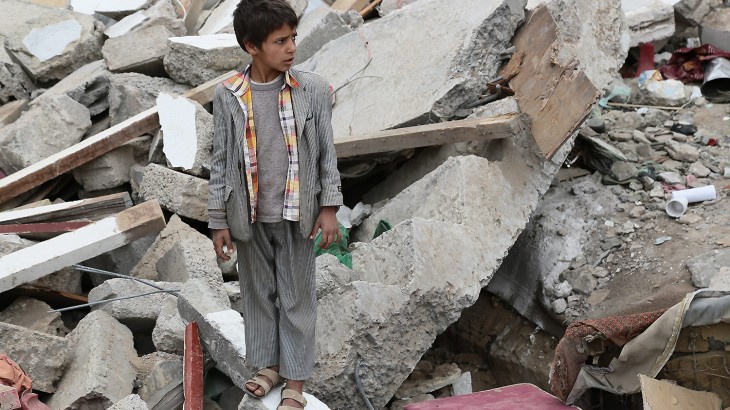 According to the United Nations, at least 1800 civilians have been killed since Riyadh began airstrikes under the moniker Operation Decisive Storm. Another half-a-million people have been displaced. The stated aim of the coalition, comprised mainly of Gulf monarchies, is to repel advances by Iranian-backed Houthi rebels who forced Yemeni President Abd-Rabbu Mansour Hadi to flee the country in late March.

Delivery of humanitarian aid has been difficult in the country that depends heavily on imports for medical purposes. A looming standoff with Iran regarding inspection of a ship laden with relief supplies was averted this week after the ship changed course for Djibouti, where inspectors are standing by.

Distribution of what aid does arrive in the country is complicated by damage to infrastructure like airports and roadways.

“Both shelling and fighting on the ground are affecting our access to those in need,” says Shaheen Amman,communication officer for the International Committee of the Red Cross, or ICRC, based in Sanaa. “Actually the most problem that we are facing today is how will we get through those front lines and access to those people injured and other civilians. We have to talk to both parties just to get agreement to that – sometimes its just about ceasefire, it’s just a short one – to get this access.”

The Saudi-led coalition began airstrikes in Yemen soon after President Hadi left the country. Much of the arms used in the military action were acquired from the United States.

According to Bill Hartung, Senior Advisor to the Security Assistance Monitor at the Center for International Policy, following a dramatic increase in U.S. arms sales to Gulf States during President Barack Obama’s administration, Saudi Arabia is now “far and away the biggest recipient of U.S. arms in the world.”

“The Obama administration has been pushing arms sales to the Gulf for two main reasons,” Hartung opines. “One is political: the president doesn’t want to fight another Bush-style, boots on the ground Iraq war. So he’s trying to support allies to carry out some of the things U.S. troops might otherwise be required to do. Secondly, it’s a big boost for the U.S. industry which has seen a slight leveling off on Pentagon spending on weapons. Their agenda is to push heavily on exports, and the Obama administration is helping them with that.”

Hartung says since President Obama took office, the U.S. has agreed to transfer nearly $80 billion in arms and defense services to Gulf Cooperation Council (GCC) member states – at least three-quarters of which went to Saudi Arabia.

A three-day meeting on Yemen held this week in Riyadh did not include Houthi negotiators. UN Secretary General Ban Ki Moon announced another meeting to be held next week between rival Yemeni parties.