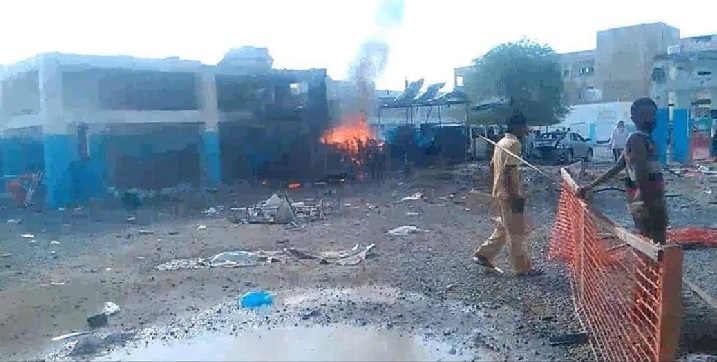 Editors Note: This story was updated in the Weekly Edition to reflect current death toll of 19 in hospital strike and MSF plans to recall staff  from Yemen.

Saudi-led airstrikes in northern Yemen continue this week with both schools and hospitals in the cross hairs. The uptick in violence comes as the U.S. is set to approve another billion dollar arms sale to Saudi Arabia. FSRN’s Nell Abram has more.

Saudi-led coalition warplanes bombed a hospital in Hajjah province Monday, early reports indicate at least seven people died in the attack. The Abs hospital is supported by Médecins Sans Frontières, the medical charity also known as Doctors Without Borders. MSF says that the intensity of fighting in the area is hindering access to the hospital.

“Civilians who were seeking medical help were killed, as well as medical staff who were trying to provide assistance to civilians, to patients who are sick at the hospital,” said Bismark Swangin, a communications officer for UNIFEC.

The hospital strike follows an attack Saturday in the nearby Houthi stronghold of Sa’dah in which two schools were hit; at least 14 children were killed. The Arab coalition claims that the school was a major training facility for Houthi rebels. But Swangin disputes claims that the children were conscripted by rebel fighters, saying they were too young.

“These are young children – some of them as young as 6 years, 8 years, 10 years. They have nothing to do with this conflict, they are not any danger,” Swangin said. “They simply came together to participate in a summer learning activity.”

The uptick in violence comes after peace talks collapsed in Kuwait just more than a week ago. Saudi-led coalition airstrikes swiftly resumed and within a day the U.S. State Department approved a $1.15 billion arms transfer to the Saudis.

Yemen is now virtually closed off, with airspace closed to commercial carriers. The country’s health system has collapsed, the economy is in crisis and banks are running out of cash. Swangin says aid agencies like UNICEF, who fund local community partners to provide assistance, are running out of cash to pay for delivery.

“Life in Yemen hangs in the balance for civilians,” explains, Swangin. “If they are not killed by airstrikes or by bullets or explosive remnants of the conflict, they face the broader consequences of the conflict, which is affecting national systems.”

Yemen has been targeted by airstrikes since March of 2015 when a coalition of Gulf monarchies led by Saudi Arabia began military operations, trying to restore the government of President Abd Rabbu Mansour Haddi.

Houthi rebels took control of the capital in 2014 and ousted the internationally recognized president, who is now in exile in Saudi Arabia.

Saturday lawmakers aligned with the Houthis convened the country’s Parliament for the first time since the conflict began. The United Nations says almost 6,500 people – most of them civilians – have died since the March of last year.